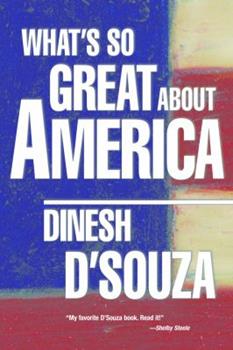 What's So Great about America

Bestselling author Dinesh D'Souza takes on all of America's critics and proves them wrong -- as perhaps only a writer with an immigrant's understanding of this country can. He defends not an idealized America, but America as it really is, and measures America not against utopia, but against the rest of the world in a provocative, challenging book.

Published by Michael , 2 years ago
I’m about 26 pages in and the clarity and intellectual honesty of D’Souza as he proceeds through the book is remarkable. Anyone looking for an honest treatment of what makes America great will find this book to be a wonderful read.

This book is an honest assessment of America.

Published by Thriftbooks.com User , 5 years ago
People who are motivated to learn will appreciate D'Souza's examples from different authors. He describes Muslim culture and many relevant issues throughout the book. His writing is clear, organized and interesting. He compares and contrasts American ideals with those of other countries. His ideas are based on knowledge from academia and experience in the personal and political world. D'Souza was born and raised in India, but came to America as an exchange college student. His ideas make sense and he gives a unique perspective. I want to read other books he has written. I recommend this book.

The West vs. the rest

Published by Thriftbooks.com User , 16 years ago
What a surprise. From the title and cover art I was expecting a 4th of July - My country `tis of thee - stand at attention and salute book full of patriotic drivel. But this is a very substantial and thoughtful study of America's institutions and its critics. And the author has a gift for straightforward, easy to understand exposition. Dinesh D'Souza came to the U.S. as an exchange student from Bombay, India in 1978. He has had an illustrious career in this, his adoptive country. He's been active in politics as a Presidential advisor and in other capacities, but is mainly a scholar and writer. He spent ten years with the American Enterprise Institution and at the time of writing this book was a Fellow at the Hoover Institution. The first chapter tackles all the standard criticisms of America which eminate from the Left, Europe and Islam. In a style that characterizes the entire book, D'Souza presents the arguments and/or complaints against America, its actions, culture, or whatever. He then replies with a calm, logical, polite but emphatic refutation. As well as being informative, this book is a lesson in the proper way to conduct a debate. Not all the complaints against America are refutable. America is not perfect and D'Souza is the first to admit it. He never engages in casuistry but admits the faults, past and present, with candor. In a Chapter titled "Two Cheers for Colonialism" he describes the wrongs of Western Colonialism, but also argues convincingly that by and large the benefits for those Colonized have outweighed the wrongs. He avers that the reason the West became the dominant civilization in the modern era is because it invented three institutions: science, democracy and capitalism. The freedom in the West derives from this combination and allows the human being to become a different sort of person than those still living in traditional societies. As D'Souza concludes: "America is a new kind of society that produces a new kind of human being. That human being - confidant, self-reliant, tolerant, generous, future oriented - is a vast improvement over the wretched, servile, fatalistic, and intolerant human being that traditional societies have always produced, and that Islamic societies produce now."

Why do people hate America, yet want to live here ?

Published by Thriftbooks.com User , 17 years ago
This book explains the reason why so many people "bad-mouth" the U.S. and "American culture", but yet, millions want to move to the U.S. either short-term or long-term. The truth is, the U.S. provides the best life in terms of wealth and freedom, and they just can't get that back home. The book is by a man who moved here, and explains, from the outside in, why the U.S. is so great.

Outstanding observations about and defense of America

Published by Thriftbooks.com User , 20 years ago
What a shame 21st century USA is so polarized where being a liberal, conservative, Democrat, Republican (etc.) means either entirely accepting without question ideas along party or ideological lines -- or entirely without question rejecting them. People don't want to give "the (domestic political) enemy" a full hearing, let alone even partly CONSIDER a foe's arguments, even if they're reasoned and make actually make SENSE. It's a shame because this book (published by the conservative publishing house Regnery, which is itself like waving a red flag in front of a bull for some people) is so engaging,well-written, convincing and solid that Dinesh D'Souza may one day be considered a modern day Alexis de Tocqueville. Three fascinating levels mark this highly perceptive book:1. D'Souza, who became a US citizen in 1991, shares how his life would have been quite different if he had grown up in his native India. 2. He makes fascinating observations about how US life and culture differ from various parts of the world, especially the Third World. These are the ones future generations may consider on the same level as de Tocqueville's. 3. And then there is material directly related to the book's title. He makes the case, in a nutshell, that other cultures (especially fundamentalist Islamic) detest the United Statesbecause Americans are inner-directed and can write their own life's script, while Islamic culture seeks a life controlled and dictated by others. One key conclusion certainly will not endear him to Islamic fundamentalists. He says the Islamic world is nothing without oil revenues. "The only reason it (the Islamic world) makes the news is by killing people," he writes. "When is the last time you opened the newspaper to read about a great Islamic discovery or invention? While China and India, two other empires that were eclipsed by the West, have embraced Western technology and even assumed a leadership role in some areas, Islam's contributions to modern science and technology is negligible." In this book, written after 911, he concludes that terrorism is merely "a desperate strike against a civilization that the fundamentalists know they have no power to conquer" so they try to "disrupt and terrify the people of America and the West." The book is worth its price ALONE for his observations on how American culture differs from the third world and many Islamic countries: Americans have to be convinced they are fighting a war for noble reasons; young people go away to college and don't return, whereas in other countries this would be like "abandoning one's offspring"; other cultures cherish age, the US worships youth; people welcome visitors for long periods in the Third World where Americans want to get rid of visitors within days. And more. D'Souza also takes on the "multiculturalists" who, he writes, detest the melting pot idea and "want immigrants to be in America but not of America." And he shows many flashesof great wit.

It's All In the Eyes of the Beholder

Published by Thriftbooks.com User , 20 years ago
In order to fully grasp the essence of this very insightful tome, perhaps, it is helpful for the reader to note the advice of an ancient philosoper when he said, "One thing I know for sure, I know nothing for sure" because to get the gradual development of the belief systems of the various cultures, an individual must take a neutral position in order to follow the comprehensive approah Mr.D' Souza reveals in the tome and not miss the powerful and insightful message. Most individuals formulate their opinions on an issue from their own experiences or observations, however, to do so with this book would be missing a valuable part of its essence as the author unravels the history of thought which establishes much of the premise that affects the current way America is viewed by various cultures of the world. While America is a great country, the reader will discover, the reason is quite different than the average person might conclude. The title of Mr. D'Souza's book, naturally reveals the idea that by the usual measurement of opportunity and standard of living, the majority of immigrants will readily admit America is a great country in which to live. The author takes the reader on a quick trip back in time in order to decipher the belief system of three cultures who show dislike for America. After expanding the thought process, Mr. D"Souza gives the reader a primary and simple explanation for such an opinion that correlates with the expressions of Rousseau.The author, while enlightening the reader on the reasons of America's opinion in the world, slowly and carefully guides him to the present. Anyone who reads the book will find it brilliantly composed and readily appreciates Mr. D'Souza's vast knowledge, research, and unique writing style. He makes reading a very enjoyable experience. Once the reader turns the first page of this book and commences through the six sequential chapters he is hooked on the power of its content and will find it most difficult to put down until the final page is reached. It will be a welcome and vauable addition of enhalncement to the informative reader's personal library. It is a masterpiece manifested by a masterful author.

Published by Thriftbooks.com User , 20 years ago
...an important point the author made in the book.If all cultures are equal, if everything is relative, if no culture can really be termed "superior" to another, why is it that every year, all over the world, millions of people vote with their feet for America and the American way of life? People immigrate here from every corner of the world, and it's virtually a one way traffic. How many Americans choose to emigrate to Nicaragua, Sierra Leone, Thailand, or Poland? But people from other countries are so eager to come here that they will do it illegally if they cannot do it any other way. If America is so terrible, how did we become the richest, most prosperous nation on earth? I know many would say it's because we are oppressors, and we have exploited the rest of the world, both people and natural resources, until we are on top, but this doesn't wash. While we are no angels, to be sure, neither are we really comparable to history's REAL oppressors, such as the Nazis, or the communists (who not only killed more millions of people than the Nazis, but had a far, far worse record of raping and polluting the environment than any Western country). I have yet to hear a multiculturalist give me a convincing answer to this.Multiculturalists, like most modern leftists, live in an idealized universe; they have long since lost the habit of testing ideas against their actual results in the real world. If you look the facts in the face, it's very hard to disagree with most of what D'Souza says.
Trustpilot
Copyright © 2022 Thriftbooks.com Terms of Use | Privacy Policy | Do Not Sell My Personal Information | Cookie Preferences | Accessibility Statement
ThriftBooks® and the ThriftBooks® logo are registered trademarks of Thrift Books Global, LLC