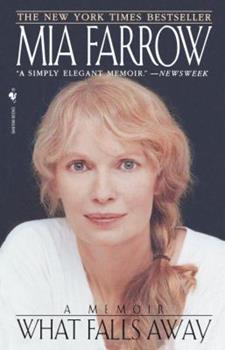 What Falls Away: A Memoir

NEW YORK TIMES BESTSELLER - "A simply elegant memoir." -- Newsweek In this exquisitely written memoir, Mia Farrow takes us on a journey into her remarkable life. As the daughter of actress Maureen O'Sullivan and film director John Farrow, she lived what was by all appearances a charmed a privileged childhood. But below the surface, money troubles, marital tensions, drinking, and occasionally violence marred the Hollywood illusion. And when Mia was...

A Really Good Memoir With No Loose Ends

Published by Thriftbooks.com User , 16 years ago
Ms. Farrow is not only a talented actress, she is also a surprisingly good writer. She takes us behind the scenes of "Old Hollywood" in her memoir WHAT FALLS AWAY, and shares some of the pains and joys of growing up in an atmosphere where the motto seemed to be "Show the World how well you're doing even if you don't have a dime!" Mia bravely talks about her own mistakes which are so much a part of living and growing up. Behind the tall gates, idols and icons become real people with ordinary struggles. This is not your run-of-the-mill Hollywood memoir. This is an excellent book which happens to be well written. {It should be noted that Mia is also a well recognized humanitarian who has helped and/or adopted numerous children with various challenges.}

Published by Thriftbooks.com User , 18 years ago
I usually love to read a good mystery. I decided to try this one out and loved it! Mia is so honest about her life's ups and downs. I recommend this!

Sincere without being Scathing

Published by Thriftbooks.com User , 20 years ago
I read a whole lot. I like biographies especially, but I shied away from this one for a long time, not interested in the over-feted ex Mrs. Previn/ ex Mrs. Sinatra whose boyfriend seduced her own adult daughter and was suspected of molesting their own child. However, as a strong adoption proponent, a TV show on Mia and her many children finally convinced me to give this book a chance.I really enjoyed it.The talented Miss Farrow is an effective narrator, recounting her life without fanfare or hyperbole. She admits to her own weaknesses (you should read Eddie Fisher's autobiography for a non-example of THAT!), and she confesses that her movie-baby upbringing skewed her perspective of normalcy that most of us take for granted. She didn't even realize Frank Sinatra was a legend at the time of their marriage, for example.She bubbles over trials (polio as a youngster, the death of her father, her divorces) with the attitude that negativity deserves no chance to crush the present. However, she spends more time on Allen; her account rings with absolute sincerity as she describes the ongoing perversions of his behavior with their daughter Dylan (and readily confesses her own "wrongness" for not stopping the inappropriateness long before she actually did, earning my respect). She even included, in an appendix, the court decision refusing Allen custody of the three children they shared and the reasons why.Her anger does appear in defense of Dylan and especially upon discovery of Allen's affair with Soon-Yi, her daughter with Andre Previn. She describes without an iota of rancor or hatred scenes of him attempting to justify himself, but I could not help but want to smack him hard for the damage he foisted on innocent children. Yes, I think Mia should have been smarter in the first place about him. So does she. But he was wrong, evil.Usually, after I read one biography, I read others about the same person (or about his or her loved ones, if they're famous and have their own books out) to try to avoid a skewed perspective of the truth... but in this case, it'll be quite a while before I would care to touch a Woody Allen ANYTHING, especially a book or film that would put money in his selfish, narcissistic, self-serving pocket.Her adoption mania struck me as dysfunctional at first, but in context (Mia is, herself, one of seven children... and she always first consulted her present family before introducing a newcomer... many of whom were grown by the time new babies entered the scene), it's not as startling as I imagined. Again, she describes the evolution of her nuclear family without sensationalism, without a "glorify me because I'm so heroic" attitude, just with simple comment that children all deserve families to love them, even children that most "normal" families would find it difficult to love. She has the means, and she has the imperfect though always willing heart to back up her inclinations.I would definitely recommend this book to read, al

Published by Thriftbooks.com User , 21 years ago
This book basically gives a lot of insight into the mentality of Mia Farrow. Her good heart, but her weak character. I don't think it's any secret to any of us that what Woody Allen did would terrify us all, fathers and mothers alike. The court documentation in the book is a nice addition to clarify it. Mia Farrow's behaviour and her twisted relationship with father-figures shows what the illness is with a lot of women today, in which they defer to someone else's judgement about how to live their own lives. It's a book I'd recommend for every woman before she wants to have children.

Published by Thriftbooks.com User , 22 years ago
Mia Farrow has been someone I have always watched from afar. I knew vaguely about her problems with Woody Allen and I was aware of her large of family of children, being the adoptive mother of six myself, and the mother of three natural born children. So..I was curious to read her book. I think any mother reading this book will understand Mia and her basic instinct to keep her family intact no matter what. Her compassion for her family that said to her that just because someone does something wrong doesn't mean we turn our backs on them. She tried all the right steps in order to "fix" the situation with Woody and her children. In this book we hear the anguish of a mother, the unconditional love of a mother...the words of a human being who believes in committment. Any mother who has been in a relationship with an abusive man will identify with this book and find strength from it. Mia had the added hardship of living in the public eye..all her dirty laundry became public domain. I think every reader will agree that she didn't deserve it..and will find inspiration in a woman who shared her good luck, who returned what she had been given, with children who otherwise might not even be alive today.
Trustpilot
Copyright © 2022 Thriftbooks.com Terms of Use | Privacy Policy | Do Not Sell My Personal Information | Accessibility Statement
ThriftBooks® and the ThriftBooks® logo are registered trademarks of Thrift Books Global, LLC