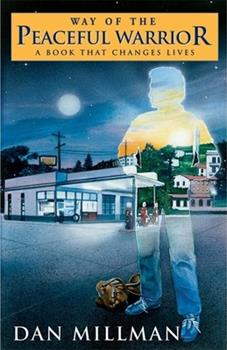 Way of the Peaceful Warrior: A Book That Changes Lives

An International Bestseller -- Rediscover Life's Larger Meaning and PurposeThe 20th Anniversary Edition with a New Afterword and Revisions by Dan Millman.A book that could change your life: When Dan Millman was a young man, he expected that hard work would eventually bring a life of comfort, wisdom, and happiness. Yet, despite his many successes, he was haunted by the feeling that something was missing. Awakened by dark dreams one night, Dan found...

Published by Thriftbooks.com User , 5 years ago
I read this while I was in college at the recommendation of a friend. It's such a great read!

You should read it!!!

Published by Thriftbooks.com User , 13 years ago
This book teach you how to live your life better... in other words enjoy your life, because it is only one!!!

Way of the Peaceful Warrior: Review

Published by Thriftbooks.com User , 20 years ago
For my independent book project I read the book Way of the Peaceful Warrior, by DanMillman. Set in Berkeley California, a young college student, Dan Millman, struggles to find thepart of himself that has always been missing. One night while out walking from his dorm, Dancomes across a gas station and a strange man that is soon to turn his life upside down. This man,known as Socrates, shows Dan a side of existence that only few people had ever seen. Tobecome a warrior like Socrates and have the mind to not allow the regular struggles of life tocontrol a single part of you. Socrates takes Dan in and tries to create a warrior from a young starathlete with the ignorance of every other human on this earth. Through his teachings Dan comesacross an elusive women named Joy. This spiritual journey shows Dan a side of life never seen byhis own eyes before, and guides him to his final conflict that hopefully will help him reach hisdestination he has always yearned for. The missing piece of the puzzle that is Dan Millman. This book shows life in a way you may have never thought of before. It shows the manysteps it takes to become, "a warrior." The biggest strength of this book is the way these steps areportrayed. In most cases it is Socrates showing the ignorant Dan the differences between theirlives. Socrates shows Dan how a warrior looks at several simple aspects of life unlike the normalhuman. In one section, Socrates shows Dan the difference between the brain and the mind. Danquestions the positive uses for the mind and the great minds in history. Socrates shows him thatthere aren't any great minds, that there are only great brains. "Mind is one of those slippery termslike love. The proper definition relates to your level of consciousness." Socrates states andcontinues to explain how the brain has abstract processes of dealing with information called, "theintellect." He adds, "Nowhere have I mentioned mind. The brain and mind are not the same. The brain is real; the mind isn't." He later explains how the mind is all the random uncontrolledthoughts that cloud your brain, and how the mind is a useless tool. This way of separating thesetwo simples words allows the reader to think about what the book is saying, and to figure out ifthere is truth to what the book says. Another strength of this book, is obviously the way it makes you think about the steps itshows. The difference between the mind and brain is not something most think about in theirregular lives. But as I read each word I found truth to what Socrates was saying. You read thisbook and try to realize the hidden messages being put across. The message between the mind andbrain is to not let your brain be attacked by random useless thoughts. In other words, to not letyour, `mind', get in the way of your brain. People think millions of useless thoughts each day. Without these thoughts a persons brain would be clear and their emotions would be easier tocontrol. Dan tries to

Published by Thriftbooks.com User , 22 years ago
So here's my experience with the book: I first purchased this book when I was 15. And to tell you the truth I don't recall why. And I read it in one sitting. I came away from the reading with a sense of "Wow, that's really amazing. That was a really cool book." However I did NOT feel that the book lived up to it's subtitle "The Book that Changes Lives" In fact I thought it was a practice in pretension to label it as Millman did. And I put the book away and forgot about it...(dramatic pause)... or so I thought (BUM BUM BUM). You see it wasn't until I was 17 or so that I began to realize that the book had made a grand impact on my life. I realized that I was seeing the world in a completely different way... that I was learning to "let things go" to have fewer expectations from life and enjoying more what life was giving me. And through practice (which probably will continue for the rest of my life, these changes have continued and refined themselves in the years following this revelation. Of course a portion of these changes are due to me simply maturing and evolving as a person from age 15 to present. The book however set me on the right path for who I am and who I am to become as time goes on. My path may be differnt than yours- and I think that's the point and the reason that the reviews on this site are either very high or very low. For some this book resonates on a deep level and for others they see only the words. This is not to put value judgements on "getting it" or "not getting it". This bok is only one of the paths that leads to wherever it is that we are all headed as humanity. Each of us, (if i may be allowed a new age moment), is a person "becoming" and at different rates. It is not a question of is this book is right or wrong, it is a question of whether this book is right or wrong for whom. In this case that "whom" is you... and there is only one way to find out and that is to read it for yourself.

Take it how you want but you won't want to put it down!

Published by Thriftbooks.com User , 25 years ago
A friend recommended this book to me and it changed my life. This is a well written, easily read book of personal growth. Initially I set out reading the book as a story and soon found that I became a part of it, living and feeling the story as it unfolded. I now own a well thumbed paper back copy. Dan, the author and world class athlete tells his own story of spiritual growth as he meets the challenges of life helped by the sometimes obtuse council of his mentor. It's a book which once you pick it up, even on the third or fourth read you just don't want to put it down and each time you read it new gems of wisdom will become apparent in the writing. We each have our own vision and purpose in life, just remember - "there are no ordinary moments"
Trustpilot
Copyright © 2022 Thriftbooks.com Terms of Use | Privacy Policy | Do Not Sell or Share My Personal Information | Accessibility Statement
ThriftBooks® and the ThriftBooks® logo are registered trademarks of Thrift Books Global, LLC