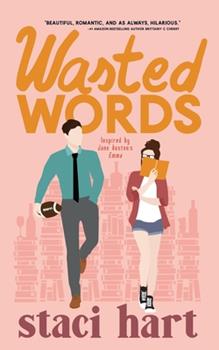 (Book #1 in the Austen Series)

Some universal truths refuse to be ignored. Peanut butter and jelly are a match made in heaven. Spaghetti and meatballs are best friends forever. And guys like Tyler Knight don't go for girls like Cam Emerson. She knew from the second she met him that he didn't belong on her bookshelf, the six-foot-six ex-tight end with a face so all-American, it could have sold apple pie. So she shelved him next to the supermodels and rock stars and took her place...

Published by Erin , 1 month ago
DNF - 54% I really wanted to like this book and I got farther than I should have gone simply because I really don't like abandoning books but this one was rife with issues. First off let's talk about spellcheck. The sheer number of grammatical errors and misspelled words had the editor in me itching for a red pen. If it had been one or two errors I would have ignored it, we're all human, we can't catch every mistake, but it was a consistent issue of a misspelled word or grammar problem on every fourth page or so. Not to mention the chosen font styling was not reader friendly and would squeeze too many words onto one line and then be properly spaced the next. Secondly the story just wasn't believable for me, I know it's a retelling of Emma but the main character is just truly unlikeable. She just felt very two dimensional to me and there was really no writing/vocal distinction between Cam's pov and Tyler's. There was no build up to their liking one another, and nothing holding them back from what they wanted except for simply not asking how the other felt. I also struggled with the steep decline of any interest I had in Cam when she suddenly blurts out her feels for Tyler. After having no trouble to remain silent for over a year prior, she suddenly just tosses out that she wants him to kiss her? It was too fan fiction trope-y to me. I felt that the writer had no idea how else to get to the romance portion of the book so she simply wrote in a trashy segue meant to bridge the gap.
Trustpilot
Copyright © 2022 Thriftbooks.com Terms of Use | Privacy Policy | Do Not Sell My Personal Information | Accessibility Statement
ThriftBooks® and the ThriftBooks® logo are registered trademarks of Thrift Books Global, LLC