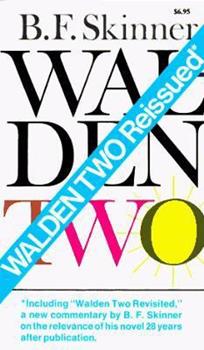 A reprint of the 1976 Macmillan edition. This fictional outline of a modern utopia has been a center of controversy ever since its publication in 1948. Set in the United States, it pictures a society... This description may be from another edition of this product.

Published by Toni , 1 year ago
I love reading this book! Skinner is far from someone who is role model material, in my opinion, but his imagined utopian society is thought provoking. The book starts off slow, and I didn't find it engaging until roughly half-way through, but it was definitely worth it. If you are interested in behavior and government, I think you'd find this book very interesting.

Published by Thriftbooks.com User , 17 years ago
Walden Two is now published by Hackett Publishing Company. The ISBN number for the paperback is 0-87220-778-1.

Published by Thriftbooks.com User , 17 years ago
This influential book created quite a stir when it was first published in 1948, so much so, that many people actually started forming intentional, egalitarian communes and existing ones embraced many of the ideas of social structure presented in "Walden Two". Further, Aldus Huxley, author of "Brave New World", was so impressed with the ideas presented in "Walden Two", that he incorporated and expanded on them in his last novel, "Island". And many people feel this was his best work. I concur. The book is not a monument to fine novel writing and was not intended to be, yet it is fascinating and eye-opening as a fictional dissertation on utopian social structure can be. Huxley's "Island", on the other hand was beautifully written and requires no awareness of the psychology of social construction going on at the same time- neither book does, really. They are both interesting and thought provoking. Skinner's basic premise was that with gentle behavioral modifications using positive re-enforcement and academics, coupled with leveling the social playing field with no class structure our hyper-competitive, private enterprise, we could then concentrate all of our energies on education and entertainment, thereby removing most all of the ills and stress that conventional society suffers from- sounds enticing, on paper anyway. B.F. Skinner was a famous research psychologist who had a life-time of noted insights into the human psyche and his constant experimentation with behavioral studies led him to map-out, in a fictional utopian setting, a demonstration of what the supposed benefits of behavioral modification would do for a large group of people. He was not trying to be a novelist, rather he was submitting to a broader audience than his peers, a theoretic utopian society that the general public could assess on their own and no doubt, Skinner was probably keen to see how the public would respond- further studies of human response to mechanisms- his favorite occupation. His very clinical approach to human behavioral studies was often criticized, but he was always quick to point out that he had no interest in debate on his methods. The following two paragraphs are borrowed from Skinner's bio seen at the Muskingum College, New Concord, Ohio website Skinner pages. Material was compiled by Christa Swenson, 1999. "Skinner was never highly influenced by critical reactions, he is not interested in the right or wrong because they are either effective or ineffective, and arguments of no avail. For that reason he is not interested in psychological theories, rational equations, or other verbal systems that are required to be proven right."- whoa. And: [Following the principles of Bacon, Skinner rejects verbal authority, stating, "I have studied nature not books asking questions of the organism rather than those who have studied the organism."... "Observation overemphasizes stimuli; experimentation includes the rest of the contingencies which generate reper

Not an instruction manual, just a fun exploration.

Published by Thriftbooks.com User , 19 years ago
I am amazed that people are criticizing this book because of behaviorism's obsolescence. Maybe Walden Two was presented differently to other people, but I initially read this book as class assignment for Psych 101 at Harvard. Professor Fernald described Skinner's WT as an interesting attempt to apply the principles of behaviorism to a society/community. I doubt even Skinner thought his novel accurately outlined the exact methods by which civilization should operate. It's not an instruction manual for humanity; it's an exploration of certain models present in most communities. Many of these models still exist in our 21st-century culture. For example, children are still raised to compete with everyone else, through sports and the ubiquitous honor societies. We laud the winners and humiliate the losers. This undoubtedly enhances the inherent duality of the human mind; it exacerbates the (harmful IMO) mode of looking at the world with the "us - them" or "me - everyone else" perspective. In WT, Skinner presents another way of raising children to allay this competitive, often merciless instinct. Is Skinner's answer the correct solution? One can only assume it isn't, but his solution does make the reader think about these societal patterns that are so often just accepted with no forethought or even conscious choice. I know people who have/make time in their lives to question the very foundations of our civilization. I let my own life be too hectic; I often just fall into patterns of behavior. However, I do often spend nights reading, and when I randomly pick up Walden Two once every few years, Skinner reminds me that all of the flaws in our society are not absolute rules of human behavior. There other ways to live, and Skinner presents some of his opinions on what those other ways might be. My own opinion is the Frazier's community in WT is not scalable, not even slightly, but I still greatly enjoy Skinner's exploration of civilization.

Taken for what it is.

Published by Thriftbooks.com User , 19 years ago
Walden Two is not a story so much as it is Skinner's idea that by using the psycological techniques of a behaviorist a utopian society can be built (it can even be considered propaganda promoting the school of behaviorism). The book lacks story, there is little charactor development or anything thing of the sort. It is essentially a grocery list of items that should be in a perfect society.With that said I justify my rating.Walden Two is a the model of a utopia, set in the United States just after World War Two. Skinner illustrates what needs to be done for the happiness of humans, but not the bliss the few ruling class or even the bliss of the majority(as presented loosely in democracy) but the bliss of everyone. The main idea behind behaviorism is that humans are born with nothing and we are the product of our histories, everything that ever happened to the indivisual will affect that person's choices in whatever endevour the indivisual is faced with. All the problems within people are learned, they can therefor be unlearned. Within Walden Two those who were born into the society never learn these bad behaviors and those who have come into the society, by following 'The Walden Code' simply unlearn them. None of the problems of modern society linger within Walden Two because of the technology of behavioral engineering. Negative emotions like jelousy or greed or hate are not present in Walden Two because the circumstances from which they arise are not preseant. There are no pressures from society itself to corrupt man, he has no reason to be corrupted if all his needs are accounted for. While this exact model of a utopia may not apply to the modern world, it's basic ideas certanly do, all that would need to be updated is the technology. Humanity will not remain static, amoung its potential directions is one towards the utopian society another, the distopian society. I'd sooner be living the life of T.E. Frazier than that of Winston Smith.

Published by Thriftbooks.com User , 20 years ago
In this book Skinner presents his blueprint for a utopia based on behavioral sciences. While someone who is just looking for a entertaining story may be disappointed or even call this book boring, I'm pretty sure that you'll like it if you have some serious interest in Behaviorism or behavioral engineering. Even if I have a master in cognitive sciences, I didn't find Skinner's ideas *really* "incompatible" with what I know, even if much of it probably remains to be proven, but the only way to prove it would be to set up such a community. Some other reviews call it a communist model, but the book actually includes chapters pointing out the differences between fascist and communist models, and Skinner's analysis shows, some 40 years before the Berlin wall collapses why the Soviet Union wouldn't survive. I wouldn't call this book "unscientific" or "outdated" as some other reviewers did. True, I would enjoy some footnotes to connect Skinner's ideas from this book to the rest of his writing and I'm wondering what would happen if we "upgraded" this book to take place in the modern internet society and taking into account all new things cognitive sciences and emotional intelligence have brought us over the 50+ years since this book has been written. This book will give you enough "food for thought"....
Trustpilot
Copyright © 2022 Thriftbooks.com Terms of Use | Privacy Policy | Do Not Sell My Personal Information | Cookie Preferences | Accessibility Statement
ThriftBooks® and the ThriftBooks® logo are registered trademarks of Thrift Books Global, LLC