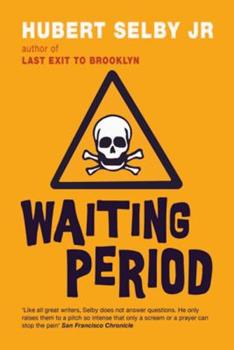 "I love the book because it transcends fashion and style. . . . It's fantastic."--Paul Morley, BBC 2 TV Newsnight Review A man pulls back from the brink of suicide when his application to buy a gun with which to shoot himself is -delayed. Instead of throwing his life away, he decides to spend all his time and effort disposing of those who he feels deserve to die. With a renewed zest for living, he embarks on a joyful killing spree, having found the...

learn to take a roman bath

Published by Thriftbooks.com User , 12 years ago
Well the waiting period basically describes what life feels like for one man before he's going to die. I'd read this one again. It reminded me of Taxi Driver and that crazy psychotic personality. This is a good book but not for the faint of heart.

Published by Thriftbooks.com User , 12 years ago
Hubert Selby Jr.'s world is one of violence and hatred, in one word, of `homo homini lupus' (e.g., Last Exit to Brooklyn, the Pusher trilogy). It is a world for loners. In this book, the main character, a rather simple mind, is confronted with a hostile bureaucracy (a `system to frustrate us so we'll stop trying to get the benefits we deserve'), fanatic and murderous religions (`These holy men of god kill millions and millions of people in the name of god, but you can't take your own life.'), greedy corporations ('What do the lives of a few million people mean if they get in the way of the Bottom Line.') or war (`Millions starving, hundreds of thousands massacred women and children hacked and burned.') Seeing no solution for the world's evils coming from others and after rejecting suicide during `a waiting period', the innocent mind chooses the path of the `faultless warrior': `The problem is once you start thinking of slime-balls in the world the list is endless. Well, I have plenty of time, a lifetime actually.' He believes strongly that he has a mission of revenge against the cost cutters, the butchers of the unbelievers, the warmongers and the bureaucrats. His law is `an eye for an eye' and he takes this law in his own hands. `Waiting Period' is a schizophrenic text, driven by associations. An interior monologue alternates with `objective' interventions of a Guardian Angel, who comments, admires or gives advice to his brother, the 'Angel of Wrath'. `Waiting Period' is a brutal text without any compromise. Only for the aficionados.

Published by Thriftbooks.com User , 18 years ago
I was not aware that Mr. Selby had continued to write, since most of his works were written in the 70s, but i am shure glad that he has not given up. "Waiting Period" is one of those books that if you only go by what's on the back cover, you would probabaly be prone to put it back on the shelf, but to the loyal few and general public who like Selbys work this is another must have. This novel has been brought to us in a time where things of this nature seem so common, i meen how hard is it to picture on the news, the events that have been written in this book. Basicaly the book is about a war veteran who is fed up with his life and decides to kill himself,on his way to purchasing a gun the "new" computer program gets jammed up, thus forcing out hero/villan to suffer a "waiting period". Our main guy then has a revelation that his life is not all that bad but the ones who deserve to die are the ones who have done him wrong, (i.e. the people who turned him down repeatedly for veteren benifits), and thus the book goes from there. I wont go on to tell the remainder because i urge everyone to read this book. Selby has the unique gift of traveling inside the characters mind and ripping out what we need to see. His sentance structure and dialogue tend to be slow and drawn out at times but maybee thats the way mentally insane people think. Hubert Selby has a gift that i am glad to share in, he doesnt write to make you feel good, he writes to make you feel real, holding nothing back, however if you are like me you always tend to find a glimmer of hope in all of his novels. they might be so far buried that you have to read and re-read but they are always there. Pick this up if you are not scared to read about the present.

Published by Thriftbooks.com User , 19 years ago
Selby is a poet who writes from experience. The experience is ugly - the poetry masterful. He lets his flag fly. That's a lot more than most others do. Read for yourself. Read all his books.
Trustpilot
Copyright © 2022 Thriftbooks.com Terms of Use | Privacy Policy | Do Not Sell My Personal Information | Accessibility Statement
ThriftBooks® and the ThriftBooks® logo are registered trademarks of Thrift Books Global, LLC