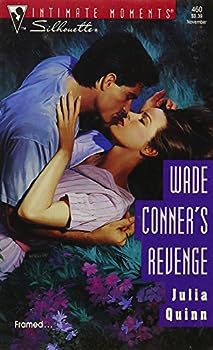 Years ago, Wade Conner's only crime had been falling for mayor's daughter Leigh Hampton. But then he'd been accused of a real crime, something so horrible that even Leigh had been too afraid to defend... This description may be from another edition of this product.

DEFINITELY NOT THE REGENCY AUTHOR - CHECK!

Published by Thriftbooks.com User , 17 years ago
Wade Conner has returned to Kinley, South Carolina for the funeral of his mother Ena. He had left 12 years ago and never returned. The girl that he loved had betrayed him. Leigh Hampton, daughter of the mercantile and snoot-nosed mayor, was just seventeen years old when Wade was accused of the abduction of a little 7 year old girl. Leigh had a healthy fear of her father and could not admit to spending the night with Wade on that fateful night. Much less her surrender to hormones. Wade still feels an attraction to Leigh but he does not trust her anymore and keeps his anger against her banked against any more hurt to his heart. Suddenly another little girl disappears and all attention is turned to Wade again. Especially by the chief of police, Burt, Leigh's brother-in-law. Everyone is warning Leigh against Wade - that he is a dangerous man. Yet she is closer to knowing Wade than anyone in Kinley. She decides to encourage Wade and help him find out what happened to little Sarah Culpepper. Boy, do they stir up a hornet's nest. After dire warnings to Leigh by the town drunk, he turns up dead. And the clue that Leigh and Wade are looking for is right under their noses. An excellent read and keeps you guessing - and yet the clues are there. HIGHLY RECOMMENDED --M - the hormones kept kicking in.
Trustpilot
Copyright © 2022 Thriftbooks.com Terms of Use | Privacy Policy | Do Not Sell My Personal Information | Accessibility Statement
ThriftBooks® and the ThriftBooks® logo are registered trademarks of Thrift Books Global, LLC