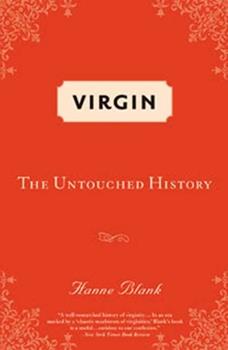 "A well-researched history of virginity...In an era marked by a 'chaotic maelstrom of virginities, ' Blank's book is a useful...antidote to our confusion."-- New York Times Book Review Hanne Blank's revolutionary, rich, and entertaining survey of an astonishing untouched history reveals why humans have been fixated on an indefinable state of being since the dawn of time. As the butt of innumerable jokes, center of spiritual mysteries, locus of teenage...

Great book on the history of virginity

Published by Thriftbooks.com User , 12 years ago
I absolutely loved this book and couldn't put it down. I'm a history and gender studies major, so this is perfectly suited to my interests. The author discusses patriarchy, religion, the importance of virginity, virginity tests throughout history. I highly recommend it!

Effortless Reading with Lots to Ponder

Published by Thriftbooks.com User , 12 years ago
Virgin is not all encompassing, but it does whet one's appetite and awareness of the material without being boring. I did not feel like I had to muck through long, science-filled passages; this book is written in a very easy to follow style. The book is divided into two parts: one on the biological aspects of virginity, the second on the cultural (mostly Western) aspects. Each part is divided into several chapters and each chapter is also broken up into subtitled sections, which makes the book great for casual reading, as well as for taking breaks and pondering the material or looking up unfamiliar terms for those who are reading this academically. I really enjoyed the book because I want to know more about reproductive issues concerning women. Remember awareness is the first tool to making the world a better place!

Published by Thriftbooks.com User , 15 years ago
The bottom line (no pun intended) is that the only reason virginity is valuable to men, as a commodity, is because they don't want to be with women who have the experience that would enable them to critique their performance. Consequently, men have made a religion or a cult or a fetish (and in some cases laws) out of this one male fantasy, based on their own sense of inadequacy or desire for control and ownership, that has resulted in untold suffering for women and children, world-wide, for millenia. Religious and government-enforced virginity results in women being judged only on their value as sexual objects. The discussion of it has become as tiresome as the reality, but hopefully not as futile.

A Historical View of an Important and Immaterial Topic

Published by Thriftbooks.com User , 15 years ago
A billboard in Baltimore used to read, "Virgin: teach your kids it's not a dirty word." That it could be thought of as a dirty word, and that social forces might pay good money to change this concept, illustrate part of the ambivalent feelings our society has toward virgins and virginity. The ambivalence, at many levels, is exhaustively examined in _Virgin: The Untouched History_ (Bloomsbury) by Hanne Blank. An independent historian (with some books of erotica to her credit), Blank says that she was working as a sex educator and wanted to find authoritative sources on virginity. Despite the medical, historic, religious, and social implications of the subject, she found few. "Even though my interests were limited to virginity and virgins in the Western world, it was rapidly becoming obvious to me that if I wanted to read a comprehensive survey of virginity, I was going to have to write it." Her book is indeed comprehensive, and it is scholarly but far from dry, as she examines the surprisingly complicated topic of what a virgin is, and tries to make sense of why the subject has been on our collective minds for so many centuries. Just defining what a virgin is is a tough exercise. And it isn't just a philosophical or verbal one: "It is an exercise in controlling how people behave, feel, and think, and in some cases, whether they live or die." The confusion is shown by Augustine, who said that if a virgin resisted rape, then she was still a virgin after rape. The defining emphasis on a potentially procreative act, rather than any other canoodling, isn't because of any inherent biological cause, but seems to be due to social factors, like a father's valuing his daughter's virginity as a bargaining chip in matrimonial negotiations No other animal besides ourselves seems to recognize or value a condition of virginity. Sometimes the explanation given is that humans are the only animals with hymens, but this is not true; lots of mammals have them, and they have hymens that are useful in, say, sealing out water, or only opening up when the female is in estrus. No animal besides ourselves pays the hymen any attention, and this is despite that the human hymen serves no function. There is no accurate test for virginity, although many have been proposed, from the supposedly physiological to the downright superstitious. "The simple fact is that short of catching someone in the act of sex, virginity can be neither proven nor disproven. We cannot prove it today, nor have we ever been able to." Just to show how patriarchal is the interest in such tests, there is always one form of evidence that is universally considered inadmissible in the matter: the woman's own verbal testimony. "Of all the countries of the developed world," writes Blank, "the United States is the only one that has to date created a federal agenda having specifically to do with the virginity of its citizens." Our federal government is attempting to establish virginity as the
Trustpilot
Copyright © 2022 Thriftbooks.com Terms of Use | Privacy Policy | Do Not Sell or Share My Personal Information | Accessibility Statement
ThriftBooks® and the ThriftBooks® logo are registered trademarks of Thrift Books Global, LLC