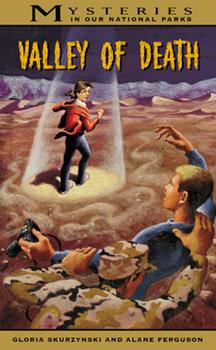 Mysteries in Our National Parks: Valley of Death

(Book #8 in the Mysteries in Our National Parks Series)

This description may be from another edition of this product. Jack can't believe what he's hearing. His sister is being held hostage. Whoever snatched Ashley must have been following the Landons as they explored Death Valley National Park. But what do they want...

Valley of Death (Mysteries in Our National Parks)

Published by Thriftbooks.com User , 13 years ago
Purchased for my grandson (age 12) who has read almost all of this series and is collecting the complete set. As a grandparent, these books foster the habit of reading and we have taken our grandson to several of the national parks written in this series. We first bought a book about 3 years ago at Mesa Verde and our grandson got hooked on them. Thanks to the author!

Published by Thriftbooks.com User , 15 years ago
I think this book was very good. It had a lot of action and suspense. In my opinion this book is one of the best in the series because of all the drama and suspense. This book is about Jack, Ashley, and their parents going to Death Valley National Park and they bring a girl named Leesa Sherman. They all go to a place named Skidoo which is suppose to be a Ghost Town. Ashley tells them this freaky story about a man who got hung because he killed a lot of people. He was buried in a mine shaft. Jack gives Ashly a two-way radio and Ashley and Leesa go and look at some things before a sand storm comes. They see Leesa running toward them without Ashley and she said she lost her during the storm. They keep trying to contact her on the radio Jack gave her but there was no answer. All of a sudden they hear a voice come over the radio saying, "We have Ashley Landon and we are keeping her until Leesa Sherman is returned to us." I recommend this book to a 11-13 year old or someone who likes mystery books.

Published by Thriftbooks.com User , 17 years ago
I liked this book because there was alot of action when Ashley was captured.I also liked in the end how Leesa went back with her mother and not to the Unit. This is a good book to read. If your interested in this book pick it up and start reading, especially if you like mysteries.
Copyright © 2020 Thriftbooks.com Terms of Use | Privacy Policy | Do Not Sell My Personal Information | Accessibility Statement
ThriftBooks® and the ThriftBooks® logo are registered trademarks of Thrift Books Global, LLC