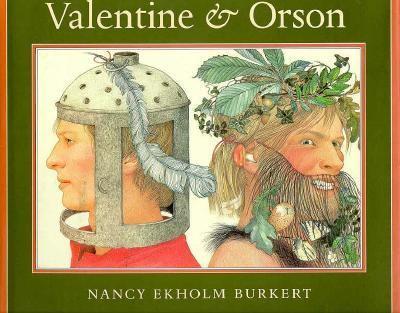 The tale of twin sons of the Emperor of Greece who were separated at birth. One is raised in the court of Pepin, King of France; the other, in a forest by a bear. This is the story of their reunion... This description may be from another edition of this product.

a treasure to cherish for years to come

Published by Thriftbooks.com User , 14 years ago
This book is a gem. Meticulously researched, beautifully written, tastefully illustrated, and authentic through and through. An essential 'living book' for a Charlotte Mason enthusiast, it gives plenty of opportunity for a later independent study in the subjects it touches: history, poetry, theater, feral children and human social behavior, etc. This is a great book for reading aloud to your children and for independent perusing by older kids and adults:) One of the best books in my extensive library.

Published by Thriftbooks.com User , 17 years ago
I tend to limit my reviews solely to children and teen books. Call me limited, if you will, but I just feel more comfortable in the realm of books intended for an audience under the age of 19. Which makes my review of "Valentine and Orson" just that much more difficult. Written and illustrated by wonderful Quaker writer Nancy Ekholm Burkert, the book is a clever retelling of a lost romantic French play. Inspired by the master painter Pieter Bruegel the Elder, Burkert has crafted a book that is not really meant for children but appears in a distinctly picture bookish format. I say that it isn't intended for kids, but when read aloud, this story is appropriate for people of all ages. And it's thoroughly engaging to boot. Our narrator is Pacolet, presented in this form as a Muslim dwarf. Before our eyes a troupe of actors appears and places a stage in the midst of a small village. They are presenting the exciting pantomime of Valentine and Orson in "nine momentous acts". In a plot worthy of Shakespeare himself (or, rather, reminiscent of) we meet Alexander, Emperor of Greece and his lovely wife Bellisant. When the Emperor's lascivious Archbishop makes a move on the lovely lady she shuns him, earning his wrath. A few well placed accusations on his part regarding that lady's faithfulness to her husband's bed is all this is needed to get her banished to the wilderness with a single servant to accompany her. Worse still, she's pregnant. And so, alone and in the wilderness, Bellisant gives birth to twins. One child (Orson) is stolen by a bear and raised to be a wild man. The other (Valentine) is found by the Emperor's brother-in-law and raised as a boy of the court. When Valentine is sent to kill Orson because of public complaints, he makes an amazing discovery and with his brother sets out to discover their true lineage. You like stories of romance, adventure, big honkin' giants, and magic? Well brother, this one's for you. According to her Author's Note, Burkert based her rendition of this tale via Henry Watson's translation of a French prose version. Inspired by Chaucer's "Canterbury Tales", Burkert decided to make her job that much harder by (shudder) putting the story into, I kid you not, iambic pentameter couplets. In words of great restraint she notes, "It has been a lengthy and daunting process". Color me unsurprised. The result, however, is flawless. Not a beat of this puppy reads as anything but harmonious to the ear of the 21st century reader. In fact, the book is so successful in terms of language that it almost seems a waste to illustrate it. I said almost. The fact of the matter is that Burkert's art is extraordinary. In the book, "The Art of Nancy Ekholm Burkert" (a recommendation of her work right there) one writer notes that her paintings are, "as highly ordered and rooted in traditional craftsmanship and discipline as any classically trained Renaissance artist". I have heard from highly reputable and Frien
Trustpilot
Copyright © 2022 Thriftbooks.com Terms of Use | Privacy Policy | Do Not Sell or Share My Personal Information | Accessibility Statement
ThriftBooks® and the ThriftBooks® logo are registered trademarks of Thrift Books Global, LLC