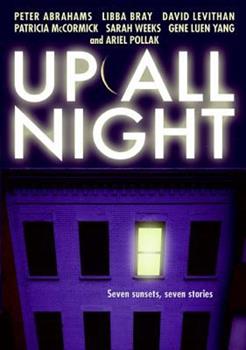 A brush with the supernatural? A rock concert? A reunion? A poolside revelation? The need to know what's up? The confessions of a friend? The dream of escape? A sick pet? An English assignment? The rear-window view of a murder next door? The search for the mother you never met? What keeps you up all night?

A powerful collection of stories from brilliant authors

Published by Thriftbooks.com User , 13 years ago
In her introduction to this fine short story collection, editor Laura Geringer says, "I hope you enjoy these unusual tales, as I have, and that whatever you select to take from them stays with you for many days and night to come, waking and dreaming." Six great writers equal six fantastic short stories in this flawless collection of tales dealing with encounters of the world of sleepless nights. From Peter Abrahams's poignant and ghostly "Phase 2" to the zany appearance in "The Motherless One" of the monkey from Gene Luen Yang's AMERICAN BORN CHINESE, each story has a different twist for situations that people encounter as they skip sleep and struggle through the night. Libba Bray, author of A GREAT AND TERRIBLE BEAUTY, offers "Not Just for Breakfast Anymore." Teenager Maggie is trying to adjust to her parents' divorce. But it's not just the divorce --- it's her mother's endless empty chatter and her father's new lifestyle. She can never share with her friends that her father is gay and actually living with his partner. Her shame and confusion are drowned out for a short while one night when she and friends Diane, Justine and Holly go out to see a band. The band never shows and they all get a little drunk, find themselves in some potentially dangerous situations and, ultimately, end up at her father's condo. Seeing her father in a different light and knowing that, despite all the pain, she has a safe haven where she and her friends can be themselves, turns out to be a revelation. It is a night of growing up for Maggie. Patricia McCormick, noted author of CUT and SOLD, presents "Orange Alert," the story of a young girl trying to deal with a stepfather who is getting too familiar with her. She spends her nights giving herself driving lessons. Feeling herself developing an independent power, she eventually puts Ed/stepfather in his place. With her new sense of self-confidence, you know this is one girl who will make positive changes. In "Superman Is Dead," Sarah Weeks explores the tender relationship between Nick and his little brother Joe. During the night Nick works on a short story for class, calling back and forth, sharing insights with his friend. The real drama, however, centers on the fading life of Joe's beloved hamster, Superman. Nick worries about how to deal with Superman when a call from his dad announcing that his new wife has had a baby (there are definitely issues to deal with here) also includes a helpful suggestion on what to do with the hamster. The night is long and painful for Nick, for Superman and for the emotional strings that twist around Nick's heart. This is a sad, enlightening and tender story whose rich characters could easily move into a book. David Levithan's wonderful "The Vulnerable Hours" explores issues of loneliness and the superficiality of so many conversations. Phil wanders around during the night asking strangers "What's up?" until he finds Sara, who begins an awakening within herself from their conversati

Published by Thriftbooks.com User , 13 years ago
This is one of the best ideas for a collection that I have ever come across. The stories are as different from one another as can be, with the common thread being that each has a character who stays up all night for some reason. Strong writers, strong material, what's not to love about this book????

Published by Thriftbooks.com User , 13 years ago
Six stories relate to the darkness and the wonder of staying up all night. Libba Bray writes about four best friends going to a concert and looking for the band's after party. When they need a place to crash, they spend the night at one girl's father's new apartment, almost exposing a huge family secret. The family in Peter Abraham's story attempt to move on after the death of a loved one, but can they reach him from beyond the grave before they let go? David Levithan explores one girl's search to let go of social politeness and to find herself in the darkness of the night. These six stories (the remaining written by Patricia McCormick, Sarah Weeks, and Gene Luen Yang) will make readers think of the nighttime and all of the secrets and power it possesses. Read these tales after dark. Reviewed by: Jennifer Rummel
Copyright © 2020 Thriftbooks.com Terms of Use | Privacy Policy | Do Not Sell My Personal Information | Accessibility Statement
ThriftBooks® and the ThriftBooks® logo are registered trademarks of Thrift Books Global, LLC