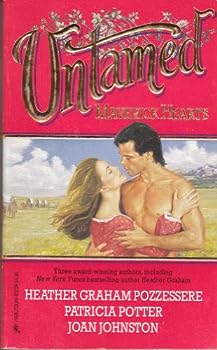 (Part of the O'Neills & Hamptons Series)

THE 5TH AND FINAL STORY OF THE HAMPTONS!

Published by Thriftbooks.com User , 19 years ago
This book contains the final story of the O'Neill/Hampton saga.Seth Hampton was met in the [original HH Christmas stories 1990] and reprinted in THE SOLDIER and THE REBEL along with his brother Rafe Hampton.Seth had love the girl, Blythe who loved Rafe, so he bowed out and headed West away from Virginia. All he wanted was peace from the horrors of war. And to lose his nightmares.He wanted to hook up with a wagon train heading west, but the people voted against having a southerner in their midst. The wagonmaster wanted to include Seth because he was a doctor.The only way he would be allowed to join was if Kate MacAllister and her brothers, nineteen year old Jeremy and 12 year old Nick would include him as their driver.Jeremy had suffered in a Confederate prison and Kate had lost her two older brothers and a fiance in the war - her mother died of a broken heart and her father soon after. NO she was not having anything to do with a southern rebel. Doctor or not.There was an attraction growing between Seth and Kate which both fought, knowing it would only lead to heartache. And Seth couldn't stand many more rejections.Read about Nick's almost instant friendship with Seth and how Jeremy grew to admire him and how Kate came to love him. Such an inspiring and wonderful story of healing of the hearts. And Kate's devotion to healing Seth's wounds of the body.HIGHLY RECOMMENDED - another keeper for the bookshelf.

Published by Thriftbooks.com User , 19 years ago
LONESOME RIDER is sure well worth reading.Jessica Dylan has come west to claim a ranch left to her by her husband.On getting closer to the ranch she meets Blade McKenna, a halfbreed and rebel of vast fighting experience and tries to hire him.Blade finds himself having to save Jessica from Indian attacks, outlaws and the commander of the Union army. Jessica even offers herself to Blade in order to have him work for her.Follow their action packed story with all of its dangerous manouvering and falling in love.Definitely Recommended ? -- Keep this one!
Copyright © 2022 Thriftbooks.com Terms of Use | Privacy Policy | Do Not Sell My Personal Information | Accessibility Statement
ThriftBooks® and the ThriftBooks® logo are registered trademarks of Thrift Books Global, LLC