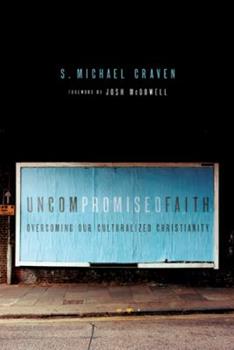 Has your faith become irrelevant? Our Western culture has systematically reduced Christianity to little more than religious ritual and personal piety. Is this really the best that God has in mind for his kingdom? Join S. Michael Craven in exploring how the majesty and radical reality of God's amazing grace have been culturalized and rendered impotent in America. Then begin to tear down the cultural barriers to both the acceptance of the gospel and...

A great, easy read! Understanding our current, cultural failures and a glimpse of hope

Published by Thriftbooks.com User , 13 years ago
I would highly recommend this book! Mr. Craven does an exceptional job at communicating where our society has been, where we are currently, and where we will continue to go given the track we are upon. He uses a similar approach as Dr. Francis Schaeffer in his portrayal of the Western nations philosophically, morally and religiously - a systematic look at the present, how we arrived at such a place and the logical continuation of where will take us in the future. He uses a lot of statistics, which can seem laborious at times, though essential to his thesis. He does a great job at making the connection to many moral issues of our time and how our worldview in the West (and America particularly) has significantly declined bringing us to unprecedented moral lows. He doesn't deconstruct our predicament and leave us feeling hopeless, rather, he sheds light on what needs to begin changing in order for this generation and the next to begin to influence the cultures in which we live and stop standing on the sidelines. If you are looking for a good overview of where we are philosophically, morally and how we have come to such a place this is a great book to read. I would also recommend "Can Man Live Without God?" by Ravi Zacherias.

Published by Thriftbooks.com User , 13 years ago
This hard-hitting book is a must read for anyone who is interested in engaging today's culture with the gospel. Craven pulls no punches from the very beginning. Less than 2 ½ pages in he says: "In comparison with past achievements, it is safe to say that evangelical Christianity is in a pathetic state of decadence and decline in the West. It is, to a large degree, fragmented, watered down, and retreating from relevancy" Craven then goes on to discuss some very important and even some controversial cultural and social issues including postmodernism, homosexuality, marriage and feminism. As part of his discussion of these topics, Craven does a great job in offering solutions to the problems. In his discussion on postmodernism he offers this advice: "The evangelical opportunity created by postmodernism lies in the resultant desire for recovering a connectedness to other people and to spiritual meaning." While this book can be looked at by many as controversial, I think it is a much needed call to action for Christians who are looking for a way to get out on the front lines and make a difference. In the Epilogue, titled "What Are We To Do?, Craven offers these words: "...retreat is not an option the Lord has given to us. God, in His providence, has placed you and me in this very place, in this very time, and the call of Jesus Christ remains Follow me!" If you're looking for culturally relevant and scripturally based answers to many of today's cultural and social issues, this book is for you.

Uncompromised faith in a compromising world

Published by Thriftbooks.com User , 13 years ago
"But dedicate your lives to Christ as Lord. Always be ready to defend your confidence in God when anyone ask you to explain it. However, make your defense with gentleness and respect." 1 Peter 3:15 (GW) "Research reveals that Christianity in America has become more diluted, more distorted, and less Christ-like with each subsequent generation," Josh McDowell writes. "So severe is the crisis that I dared to proclaim that if something serious does not occur in the life of the church, we may be witnessing the last Christian generation in America." "Historically, Christians have been formidable in projecting this new and true interpretation of reality [the transformational shift in our conceptions of reality, self, human nature, knowledge, morality, and ethics] into every aspect of American life and culture," S. Michael Craven offers, "not by political coercion but through intellectual influence, missional activity, and compassionate outreach." But, in today's culture, where a candidate can be elected President through 'inclusive and universal' change even by those who claim Christianity as their religion, such formability has become systematically reduced to "religious ritual and personal piety." As the world has become increasingly intolerant of its views and its mission, the Church has withdrawn into its beautiful buildings and subcultured language, symbols, and literature. It has strayed away from the very calling of its mission and ill-equipped those daring enough to venture into the culture of deprived and sinful world. It has become a victim of the culture, influences, and worldview of a society it was supposed to save. S Michael Craven, president of The Center for Christ and Culture, is considered to be one of the leading cultural apologists in the modern world and offers those daring enough to engage in discussion a thought-provoking and challenging look on the crisis facing the movement started by Jesus Christ and the ineffectiveness of modern Christianity in meeting that commission given in his book Uncompromised Faith: Overcoming Our Culturalized Christianity. "Empty-headed evangelism," Craven believes, is the "dumbed down Christian theology" that has created a generation of Christians who are afraid to engage in the hard questions that society uses to silence the witness of the followers of Christ, prevents effective discipleship, and has created a world where the immoral views of humanism are dominant. He calls for a renewed, biblical form of engagement in the battle for the lost souls of the world, in an effective and culturally changing mindset. Missional apologetics. A way of engaging the culture in a way that historical apologetics (classical, presuppositional, and evidential) has failed to do. In "addressing the ideas or ideological influences common to a given culture," and recognizing "social issues and their underlying ideas or worldviews," missional Christianity becomes more of a "rescue force that is determine

Published by Thriftbooks.com User , 13 years ago
Uncompromised Faith should create an epiphany within the North American church. Mr. Craven outlines ways that the culture has influenced the church to the point of diluting the power, hope and relevance of the gospel. He then takes on several controversal issues of the day and shows the way for the church to engage society in a winsome and biblically sound manner. Christians and churches that follow this lead will find lives and communities transformed. I highly recommend this book for personal consumption as well as for small group study.

You Must Read This Book!!!

Published by Thriftbooks.com User , 13 years ago
Michael Craven's Uncompromised Faith is an absolute must-read for all who desire to biblically and thoughtfully engage today's culture. Craven is a powerful communicator; his meticulous research and respectful tone throughout give his voice the right to be heard, regardless of one's perspective. Craven contends that the biblical worldview is not only still extremely relevant, but is actually ignored at one's own deep peril. He wades into some of today's most heavily debated issues--the effects of modernism and postmodernism on the church and culture, the ongoing heritage of the sexual revolution of the `60s, the nature of marriage, and more. Craven's work is profound in that it shares the legacy of another clear voice that in a previous time dared to face the deafening din of the cheering masses and calmly utter the words, "The emperor has no clothes!" Craven's work is unique in its content, but also in its tone. Sadly, too many books have been written on these topics which ultimately fail to contribute anything of value to anyone. These books tend to fall to either of these two extremes: complete capitulation to cultural values or angry denouncements of any and all opposing points of view. Craven intentionally avoids the insipid stupidity of bumper sticker slogans or the thoughtless wrath of vitriolic placards. Uncompromised Faith refuses to compromise on biblical truth, the merit of research, the importance of love, or the need for compassion. Its overall message is a simple one: the gospel compels Christians to engage the culture for the sake of the Kingdom of Heaven. I am one of the leaders of ministry that is designed to disciple emerging Christian leaders. As a result, I am constantly engaged in conversations with young, eager brothers and sisters who are desperate to understand not only how to act and live, but also how to think, dialogue, and engage as a CHRISTIAN. Uncompromised Faith is absolutely one of the top five books I recommend.
Trustpilot
Copyright © 2022 Thriftbooks.com Terms of Use | Privacy Policy | Do Not Sell or Share My Personal Information | Accessibility Statement
ThriftBooks® and the ThriftBooks® logo are registered trademarks of Thrift Books Global, LLC