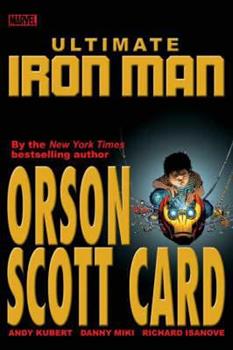 A Daring Take on a Marvel Legend

Published by Thriftbooks.com User , 14 years ago
This TPB (also available in hardcover), collecting the entire five-issue run of the first Ultimate Iron Man volume, has come under quite a bit of fire. However, I applaud the unique take that Orson Scott card took on this iconic Marvel character. The Ultimate Universe is all about recreating the world of Marvel for contemporary readers, many of whom are completely new to comics in general. As such, it provides a wonderful opportunity for the writers who are fortunate enough to work on these projects to try something new (the Bendis origin for Venom- lab project gone awry, rather than extraterrestrial- is a perfect example). Card was tasked with adding a whole new take on the Iron Man canon, making the story unique and accessible for new readers all the while. Not a particularly easy assignment, but my personal verdict is that he succeeded. There are three reasons in particular why I feel this book is valuable not only to the Iron Man character, but the entire Ultimate Universe. It masterfully explains the root causes for 1) Stark's genius, and why he displays almost inhuman levels of productivity and innovation, 2) why he is obsessed with constantly building and improving armor, and 3) his affinity for the consumption of alcohol. I will not reveal any specifics or spoilers here, but for those of you who have read the book (or plan on reading it), pay close attention to those three points, and ask yourself if Card did not do an excellent job of giving credence to Stark's character. For instance, after reading this volume, it seems that Stark's drinking is not a way for him to escape the burdens of reality (which would make no sense for a man so driven by the need to constantly build his empire and legacy), but is in actuality a means of enhancing his productivity. This may sound like an implausible theory to those who have not yet read the story, but once you learn of Stark's origin in the Ultimate Universe, and his unique genetic makeup, it all comes together (it also explains how he can drink so much without suffering any permanent damage). The Ultimate Universe is all about new ideas for old characters. It runs parallel (exists outside of) the original Marvel Universe, and so a new take on a character like Iron Man should not offend any of the die-hard fans. For those of us who do not have the benefit of having been around the past 40+ years to absorb all the background of Marvel, this is like being a kid again, and witnessing the birth of legends.

A Great Addition to the Ultimate Universe

Published by Thriftbooks.com User , 15 years ago
At First Glance: When I first saw that Marvel had started Ultimate Iron Man i was ecstatic. Not only am i a big fan of Iron Man, But the Ultimate universe as well, and I eagerly awaited the paperback; my wait was not in vain. New Take on Stark: When I first started reading the new Ultimate Iron Man, written by Sci-Fi legend Orson Scott Card, I was surprised my the new spin he took. Tony Stark, due to an accident that occurred while he was still in his mothers womb, has brain cells that are developed through his whole body. This causes him to be in constant pain, which becomes the reason for him becoming an alcoholic. It also leaves him with the ability to regrow limbs that he loses (based on the properties of the chemical his mother got infected with while pregnant). Brief Plot: The story follows both Tony Stark's growth from a mere toddler into the adult he will become, and the creation of his Iconic Iron Man suit from its meager beginnings. I know to some this may sound lame, or a horrible take on a classic character, but believe me it is not. I honestly believe i do not have the ability to convey the greatness of Ultimate Iron Man Vol. 1. Is Ultimate Iron Man 1 for Me: If you are dying to know the back story of "The Ultimates" Tony Stark, Love Iron Man, or just looking for a good read while you wait for your next issues of whatever comic you read, this is defiantly worth getting.

Published by Thriftbooks.com User , 15 years ago
Although Iron Man's new Ultimate-universe origin story is a bit far-fetched, with Tony Stark now a scientifically engineered mutant-savant, raised by an on-the-lam father in a T2-ish survivalist mode, I still found the book itself to be pretty readable and fun. It was engaging and enjoyable... I'd be pleased to read the second volume when it comes out in paperback!

Published by Thriftbooks.com User , 16 years ago
...this isn't going to knock your socks off. Ultimate Iron Man is a solid sci-fi story. A cool origin story for one of my favorite Ultimates characters. However, on the other hand, it's not the great story that I thought it would be. When I heard that they were bring Orson Scott Card on to write Iron Man, I was stoked. Ender's Game, the Alvin Journeymaker series, his novelization of The Abyss... Card's a solid writer. While it was fun it wasn't amazing. Which, I guess, is what I expected. It was a good read but not worth the money of the hardcover. I found the fist Ultimate Fantastic Four to be a better and more exciting read. I think Card is a great writer but he needs to log in some more time writing comic books. He's just not there yet...

A refreshing look at a tired character.

Published by Thriftbooks.com User , 16 years ago
Orson Scott Card really brought new life to Iron Man for me. For any reader of super-hero comics, especially those who have waited for an interesting Iron Man outside of Avengers, here is your book. Card reinvents the character to make his motivation more reasoning and believable. Delve into Tony Stark's youth for an Ultimate look at a once again great character. Thank You Mr. Card.
Trustpilot
Copyright © 2022 Thriftbooks.com Terms of Use | Privacy Policy | Do Not Sell or Share My Personal Information | Accessibility Statement
ThriftBooks® and the ThriftBooks® logo are registered trademarks of Thrift Books Global, LLC