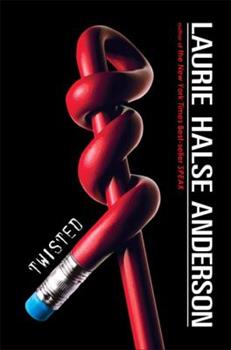 High school senior Tyler Miller used to be the kind of guy who faded into the background average student, average looks, average dysfunctional family. But since he got busted for doing graffiti on the school, and spent the summer doing outdoor work to pay for it, he stands out like you wouldn t believe. His new physique attracts the attention of queen bee Bethany Milbury, who just so happens to be his father s boss s daughter, the sister of his biggest...

Published by sav , 1 year ago
beautiful condition, no folds on the cover. 10/10

Laurie Halse Anderson does it again!

Published by Thriftbooks.com User , 15 years ago
Laurie Halse Anderson has scored another hit with Twisted. I am a huge fan of her book Speak and think that this book is just as good as that one. As a high school librarian I am always looking for well-written books where the protagonists are realistic and relatible. This book gives us both. Plus, I like it that the main character is a male. I can recommend this book to both male and female students and I do.

Published by Thriftbooks.com User , 15 years ago
Laurie Halse Anderson is the author of 5 novels and 3 picture books. Her books have been nominated for numerous awards and many recommendations. Each of her books that I have read has been excellent and this one is no exception. The dust jacket states "Everybody told me to be a man ... Nobody told me how." Anderson captures the essence of the journey from a boy to a man. Tyler Miller had been caught defacing school property, and now he is a hero to some, and an outcast to others, and is trying to find his way in the world. He has done community service all summer at the school, and worked for a landscaping company. Now he must return to school and face the students and teachers who know what he did and the punishment he received for it. The school year begins badly; at a party he is knocked into a tray of glasses and cuts the feet of the Alpha female of the school, who happens to be the women of his dreams, Bethany Milbury. Tyler is forced to take Bethany a cake as an apology for the accident. They become friends, and seem to be sort of dating. Then Bethany gets trashed at a party, and Tyler does the right thing. Yet Tyler broke his curfew from the court and that is just the beginning of some serious problems in his life. Unfortunately someone takes advantage of Bethany while she is drunk and most people think it is Tyler because of his reputation. Most people think he did it. The cops keep coming by. He is attacked in school and out of school. He struggles with what to do, how to be a man. Can he learn how to be a man; can he take control of his life that seems completely out of control? This book does an amazing job of capturing the angst of growing up, of finding your place in the world. It shows clearly the transition from boy to man, and then end of high school and moving on to the rest of life. Anderson, as a woman, surprised me with he ability to write about becoming a man; her insight and clarity are awesome. This book should become a classic. Much like her earlier novel Speak I believe this book should be on the reading list for every high school or university Children's Literature course. The book leaves you wanting more. The reader will want to know what happens next. Where is Tyler in a year, 3, 5 or 10? These questions will haunt you after you finish the book. (First Published in Imprint 2007-09-28 as 'Short Titles With Varied Depths.')Speak

Published by Thriftbooks.com User , 15 years ago
Everybody told me to be a man. Nobody told me how. Tyler Miller is used to being Nerd Boy but all that changes after he is arrested. During his mandatory community service, he develops not only a buff body but the attention of the most unlikely girl on campus--Bethany Milbury, whose father also happens to be his dad's boss. Tyler knows he should bask in his new status on campus but others are not too thrilled with him. Chip, Bethany's brother, hates him. Then there's Tyler's sister, Hannah, who's growing up too fast in his eyes. Or as Tyler states: Sisters should not have boobs. To make matters worse, his best friend Yoda wants to move from friend-who-was-a-boy status to Hannah's boyfriend. Tyler struggles with his own feelings regarding Bethany. One night he goes to a party and his life is changed--once again. He's found guilty before proven innocent by his principal and peers based on his earlier act of vandalism. And life at home isn't any better. His father blames him too. When everything proves to be too much for Tyler, he makes a crucial decision. One that will affect not only him but those around him. I loved this book. I especially loved the voice of Tyler. I found myself cheering for him, even when others in his school turned on him. His conflict with his perfectionist father and how he comes to grips with it will stay with the reader long after the last page. I'd recommend this book to anyone who wants to know what goes on inside the mind of a seventeen-year-old boy.

Brutal BUT needed, and NOT for children

Published by Thriftbooks.com User , 15 years ago
I picked up this book the week of the Virginia Tech massacres, and I had no idea what Twisted was about. Halfway through, I was desperate to put it down because of the intensity, believing I knew where it was heading. Thankfully, astonishingly, I was wrong. Twisted should not be with the young adult sections of Border's, Barnes and Noble, or of library bookshelves. The themes are too intense for a lack of maturity or discussion. It takes a phenomenal author to pull this type of modern tale off, and Miss Anderson is just that.
Trustpilot
Copyright © 2022 Thriftbooks.com Terms of Use | Privacy Policy | Do Not Sell My Personal Information | Cookie Preferences | Accessibility Statement
ThriftBooks® and the ThriftBooks® logo are registered trademarks of Thrift Books Global, LLC