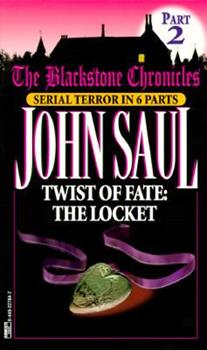 (Book #2 in the Blackstone Chronicles Series)

His career as president of the First National Bank threatened by a troubling audit, Jules Hartwick is further disturbed when he receives a mysterious silver locket that, once opened, sets off a terrifying chain of events, in the second of a six-part serial saga. Original.

Part 2 in The Blackstone Chronicles

Published by Thriftbooks.com User , 18 years ago
"Twist of Fate: The Locket," the second part in The Blackstone Chronicles, begins and ends with gory eviscerating scenes, the prologue being more shocking, in my opinion, of a mental patient at the Asylum being gutted to remove a silver locket, which later comes into play. The middle part of the story is bloodless, as it closely follows Jules Hartwick, president of the First National Bank of Blackstone, as he stresses over an audit, then becomes severely paranoid after finding the above-mentioned heart-shaped locket that he believes is a sign of his wife's infidelity. This is a good serial addition to the six-part Blackstone Chronicles, preceded by "An Eye for an Eye: The Doll" (#1) and succeeded by "Ashes to Ashes: The Dragon's Flame" (#3), "In the Shadow of Evil: The Handkerchief" (#4), "Day of Reckoning: The Stereoscope" (#5), and "Asylum" (#6). As a whole, "The Blackstone Chronicles" is one of my favorite John Saul books.

Twist of Fate: The Locket

Published by Thriftbooks.com User , 20 years ago
A new curse has come upon Blackstone. Jules Hartwick finds a locket in his wifes car. He becomes very jealous and nervous thinking everyone is after him. Could the locket have something to do with the way he is acting or did he just have a nervous breakdown. Is Jules so insane he might kill? To find out you should read this book. It is one part of a great mystery unfolding in Blackstone. Who will be the next vivtim to this insanity that has befallen Blackstone.

This one was *even* better than the first (also good!).

Published by Thriftbooks.com User , 21 years ago
I read this in a couple of days, and I must say that the schmuck who wrote the review below ("Not Again!" was the title) was full of it. This book is only similar to the first because it has another gift being sent out to someone. Otherwise, it is *totally* different than the first, and is even pretty *scary* at times. I eagerly await #3, which I take will be even better. I can tell newcomers to this serial book this much: DO NOT LISTEN TO THE BAD REVIEWS OF BOOKS!

I turned the pages to this one.

Published by Thriftbooks.com User , 23 years ago
This is not literature. But it certainly is entertainment. I think it's about as much fun figuring out what is going to happen next and how the past effects the present. Who will die next? Who will get those awful gifts? Keep 'em coming.

Lorena's spell on the locket

Published by Thriftbooks.com User , 24 years ago
Better than the first story in the Blackstone Chronicles. More frightening too because it didn't turn out as I expected. They did rush Jules into madness a little too fast. It would've been better if after he got "the locket" that he slowly became paranoid. Not in just one big dose. Still better than the first. --NA
Copyright © 2022 Thriftbooks.com Terms of Use | Privacy Policy | Do Not Sell My Personal Information | Accessibility Statement
ThriftBooks® and the ThriftBooks® logo are registered trademarks of Thrift Books Global, LLC