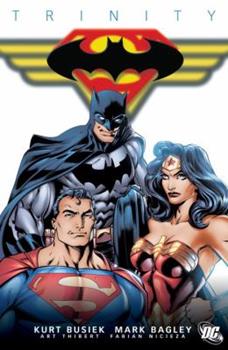 by Kurt Busiek and Fabian Nicieza

Writer Kurt Busiek (ASTRO CITY, Marvels) and artist Mark Bagley (Ultimate Spider-Man) bring Superman, Batman and Wonder Woman together in the newest weekly book from DC Comics. The "Big Three" heroes of the DC Universe continue to ward off an invasion from a neighboring galaxy and come face-to-face with evil versions of themselves Against Ultraman, Owlman and Superwoman, can Superman, Batman and Wonder Woman stand a chance?

Reviewing this Volume, not the comics inside it,

Published by Thriftbooks.com User , 12 years ago
As you may know, comic book paperbacks are reprints of comic book, which means some people bought the individual comic books and are reviewing that instead. I read this for the first time in this collection, here's my review. Mild spoilers for the first volume, the Dark Trinity succeeded in removing Superman, Batman, and Wonder Woman as cosmic keystones. The result is not just a world where the "Big Three" never existed, but where the aspects they represent have lost part of their power. This new Earth is slightly askew and bleached of color, I would say. As a result of this imbalance, the story can be frenetic. It jumps between the characters storylines. We continue to follow Tarot and Gangbuster, learn the origin of the Justice Society International, and the schemes of the Dark Trinity. Also, follow Alfred, Lois, Dick Grayson, Donna Troy, and Nemesis on their pilgrimage to a world where the Trinity are Gods. Culminating in a world wide "Battle of the Dark Arcana." Yes, the actual, factual Trinity does not appear in this volume, but their Godly doppelgangers more than make up for it. Kal-El, who loves the world, Diana, the spirit of truth, and Batman, the weird figure of the dark, appear as their undistilled forms. The Dreambound are back (TMV, Sun-Chained-in-Ink, Primat, etc), Kovikt, Firestorm, Green Lantern - John Steward, and many cameos by too many heroes and villains to name. While I still like this book, a few plot lines drop off at the beginning of this volume, to hopefully be resolved in the third volume. This still takes place before Final Crisis, Batman R.I.P., and New Krypton. You'll also see Lord Khyber from Busiek's Superman: Camelot Falls (though it's not important to have read it). And, I'll review Volume 3 when I am able to read it.

Published by Thriftbooks.com User , 12 years ago
I think the other reviews unfairly malign this volume. Does this volume lack the cover Trinity? Well, it has them a little, but basically yes. Is the story still riveting and at many times focused on them despite their absence? Yes. The new Trinity-less world is an interesting place and if anything I'd have liked to see more of it. The villainous trio of the piece continue to develop, and the conflict really heats up in the second half. There's real tension as both sides fight back and forth for control of existence and it's hard not to grow sympathetic to even some of the antagonistic members of the JSI at times. Meanwhile while that's going on, Alfred 'Freddie' Pennyworth leads an expedition of his own of a lot of the Trinity's loved ones through another world entirely, who's mythic nature hints at the events of their world. If you go to this volume just looking for the Big 3, will you be disappointed? Sure. If you go to this volume looking for more of Busiek's excellent story telling and part two of the Trinity story, will you be disappointed? I sincerely doubt it.
Copyright © 2020 Thriftbooks.com Terms of Use | Privacy Policy | Do Not Sell My Personal Information | Accessibility Statement
ThriftBooks® and the ThriftBooks® logo are registered trademarks of Thrift Books Global, LLC