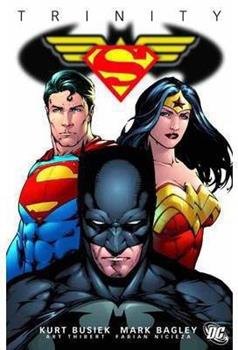 by Kurt Busiek and Fabian Nicieza

Writer Kurt Busiek (ASTRO CITY, Marvels) and artist Mark Bagley (Ultimate Spider-Man) bring Superman, Batman and Wonder Woman together in the newest weekly book from DC Comics. The "Big Three" heroes of the DC Universe finally star in their own title side-by-side as they face off against an intergalactic threat no one saw coming TRINITY elaborates on what each of these heroes means to the DCU as well what their friendship means to one another

Published by Thriftbooks.com User , 11 years ago
While not a perfect comic, I was really impressed with this first volume "Trinity." It is a pithy, complex and quasi-mystical story that explores the role of the "Big Three," (Batman, Superman and Wonder Woman) in the DC universe and their roles as the keystones on which the universe stands. I had originaly thought that "Trinity" was a continuation of Matt Wagner's Batman/Superman/Wonder Woman: Trinity, but it is a unconnected series. This "Trinity" was DC's second attempt at a weekly series following up the critically acclaimed and popular 52. Like "52," the series is entirely self-contained and can be read without needing to pick up any other collections. Unlike "52," which shared writing duties with four authors lending four distinct voices, "Trinity" is the brainchild of Kurt Busiek with only scripting assistance by Fabian Nicieza. The art is split between Mark Bagley (doing his first work for DC comics after his 110-issue run of Ultimate Spider-Man) and Tom Derenick, Scott McDaniel, Mike Norton and a few others doing pick-up work. Collecting issues #1-17, "Trinity Volume 1" sets out the story that Morgaine Le Fey and a mysterious figure named Enigma have discovered that the universe they know rests on a symbolic keystone. Within the DC multi-verse, the Earth-1 universe is the keystone, and within that universe the planet Earth is the keystone, and on that Earth Batman, Superman and Wonder Woman are the ultimate keystones. The universe literally rests on their shoulders. The remainder of the multi-verse echoes what happens to the keystone, which explains why there is a Batman, a Superman and a Wonder Woman archetype no matter where you go. Le Fey and Enigma concoct a plan to eliminate this "Trinity" and replace it with themselves. With Le Fey they have a woman of myth and magic, and with Enigma they have a human brought to full potential and wielding science and logic; what they require is a strange visitor from another planet to stand in for Superman. They finally complete their own "Trinity" with the recruitment of Despero. Le Fey, Enigma and Despero don't have all the tools they need to pull their trick off though, and they need to distract the heroes so they send them on a mission to the anti-matter universe of Earth-3 to do battle with their evil counterparts Owlman, Ultraman and Superwoman. At the same time, an tarot card reader named Rita might just be the voice of the current universe, and the only one who can unravel what exactly is going on. Everyone gets involved at some stage or the other, from the Justice League to the Teen Titans to the Outsiders down to the return of Gangbuster and the mad scientist Krona in his cosmic egg. At first I rejected this concept of Superman, Batman and Wonder Woman being the keystones of the universe, until I realized that they are exactly that. The keystones of the DC universe. The DC universe sprang suddenly to life with "Action Comics #1," and Superman, Batman and Wonder Woma

Trinity = Great read for fans of "The Big 3"

Published by Thriftbooks.com User , 11 years ago
Trinity Vol 1. delivers a story that is epic in scope and enjoyable throughout. It has a pretty good plot, intrigue, some great action, and memorably storyline. It's also a little tough to follow at times, I recommend reading it in the span of a week or two, taking long breaks from it will probably leave you confused. Where Trinity might not compare to some classics like Kingdom Come, it utilizes DC's greatest heroes quite well. One heck of a finish, too. (Believe me, if you finish reading this, you'll be itching to read Vol 2.) If you like Superman, Batman, and Wonder Woman, and you like the idea of a cosmic epic revolving around these three characters, then you'll probably like Trinity. There's a lot of great character work with these three, they play off one another's personalities really well and we get a number of well executed fight scenes. But if you're only a fan of one, say Batman for example, you probably won't get into this story.

Reviewing this Volume, not the comics inside it

Published by Thriftbooks.com User , 12 years ago
As you may know, comic book paperbacks are reprints of comic book, which means some people bought the individual comic books and are reviewing that instead. I read this for the first time in this collection, here's my review. The story focuses on Superman, Batman and Wonder Woman who are being targeted by three villains: Morgaine la Fey (which you might remember from the cartoon Justice League), a new character called Enigma, and Despairo (which was last seen in [if I remember correctly]JLA: Crisis of Conscience, or Batman: the Brave and the Bold). Along the way, the book also guess stars a new character named Tarot, a returning Superman ally Gangbuster, Green Lantern John Stewart (most famous for his appearance of Justice League and Justice League Unlimited), the Riddler, fan favorite Hawkman, and also Nightwing and Robin. Plus, cameos by the rest of the JLA, JSA, Teen Titans, Titans, Birds of Prey, and the Outsiders. You'll also see a new band of empowered minions, the Crime Society, and a mysterious alien called Konvikt. This volume is the set up of the villain's scheme, and is certainly entertaining. There are some really great Superman moments, as well as looks into Wonder Woman's way of thinking, and Batman is never left behind by his two super-powered companions. I don't know how this ends, but I've heard about alternate earths as the story develops. For those concerned with continuity, this takes place BEFORE Final Crisis, World of New Krypton and Batman RIP. But AFTER Gotham Underground. Though, other than mentions of the Gotham Underground, the books is not very continuity heavy, except for instances alluding to past JLA story lines: JLA: Earth-2 and JLA/Avengers, so use your best judgment if you absolutely MUST know everything that's going on. I haven't read those books and I enjoyed this just fine. I'm waiting on Volume 2 and I'll review that, too.

Published by Thriftbooks.com User , 12 years ago
I read the other 2 reviews and was taken aback a little. I have read this series in issue form and the basic storyline is similar to 52 Weeks except in this case the big three: Superman, Batman and Wonder Woman are removed from the DC Universe. It starts off with the premise that a universal power focuses around a trinity in this case the big three and you have three villains that want to take the power for themselves. As a result the DC Universe is remade with the big three missing and you have the Justice Society evolve until this all powerful international force with control over the world to a major extent. There is a secondary universe that I must admit was a little too weird for my taste but the uber and somewhat tyrannical Justice Society was awesome. If you like Elseworld style stories, pick this series up.
Copyright © 2020 Thriftbooks.com Terms of Use | Privacy Policy | Do Not Sell My Personal Information | Accessibility Statement
ThriftBooks® and the ThriftBooks® logo are registered trademarks of Thrift Books Global, LLC