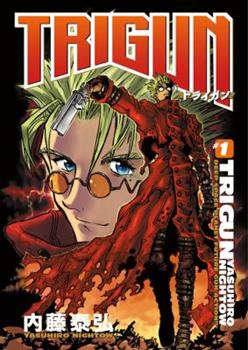 here is a legendary gunman. His name is... Vash the Stampede Vash the Stampede, also known as the Humanoid Typhoon, is feared throughout the land for being a destroyer of cities, so much so that sixty billion double-dollar bounty's been placed on his head!Vash is actually a really nice guy, which is why two insurance agents sent to find the humanoid typhoon just don't believe it's him.Based on the wildly popular manga by Yasuhiro Nightow comes to...

Published by Ame , 1 year ago
I bought this manga because I love the anime and wanted to read the manga, without paying too much. So I bought the “acceptable” quality one, and it was fantastic!! Great story, characters, everything, but most of all great value for the price!!

Published by Thriftbooks.com User , 16 years ago
This manga is great! It is the first manga I have ever read so it took me a couple pages to get used to it and sometimes I would still end up looking over a frame many times before I understood what was happening. This has a lot to do with how much action there is and what I am assuming are the sound effects (still in japenese because they are part of the actual artwork and would be difficult to switch to english). There are some things that I don't like but overall its great and well worth the money.

The beginning of a masterpiece.

Published by Thriftbooks.com User , 16 years ago
There are tons of manga on that I regularly collect. Dragonball/Z, Yu Yu Hakusho, Rurouni Kenshin, Ranma 1/2, Case Closed(Detective Conan), Yu-Gi-Oh/Duelist/Millenium World, and others.... but there are a rare few that grab me, that are are real gems that contend for the greatest manga in existence, such as Akira, Nausicaa... and Trigun(and Trigun Maximum). Most people are probably familiar with Yasuhiro Nightow's series through the 26 episode anime series that was released in the US by Pioneer(now Geneon) and has aired on the Cartoon Network's Adult Swim block, and let me tell you, as good as it can be, does not do this manga total justice. Covering only about 1/3 of both Trigun and Trigun Maximumn, the anime was forced to not only cut the overall plot short, but also cut out the development of many characters. Vash, the tortured wanderer throughout the planet Gunsmoke, who endlessly searches for his sinister brother, Knives, has a slightly deeper history, as does his eventual traveling companion, the priest/gunman Nicholas D. Wolfwood. Millions Knives, Vash's bro, is far more vicious and cruel, as is his subordinate, Legato Bluesummers. Bernadeli insurance girls Meryl Strife and Milly Thompson are pretty much the same, although personally I found Meryl far more likeable in the manga. Most of the Gung-Ho Guns are also far more sadistic, screwed up, and crazy than the manga(particularly Zazie, although I won't spoil anything), shocking anyone who's used to their anime personas. Nightow's artwork is a true sight to behold, something people will just have to see to fully understand its beauty. The grimy, dusty, and decayed design of Gunsmoke truly is a marvel to look at, and I often spend minutes just staring at the art before proceeding on with the story. The fast-paced action sequences have a fantastic rush, although often they also cause things to become intensely confusing, wondering who's shooting at who and what's getting blown apart, and it does take some time getting used to Nightow's style during these action-packed parts, but once it does, you are in for one crazy yet entertaining ride. The first volume is episodic for the most part, other than introducing Vash, Meryl, and Milly, the real plot doesn't really begin until volume 2(and continues on into Trigun Maximum), but the stories are a nice read and help us get to know our three main characters, thus setting up the main Knives/Gung-Ho Guns storyline. Overall, this makes one heck of a great read. Welcome to Gunsmoke, and enjoy your trip.

Great Manga, A Real Must Haver

Published by Thriftbooks.com User , 17 years ago
This is by far the best manga I have ever read. It is a great blend of action and comedy and unforgetable characters. It isn't that much different than the anime, only slightly differing in some parts. It contains the original manga form of the first few episodes (those with Brilliant Dynamites Neon and the Nebraska Family ending with Meryl and Millie saving "without help" the plantation) and they are portrayed quite well. The artwork although in the very beginning is of a slight less quality than the anime early in the Manga. Those of you out there with a Wolfwood Legato or Knives obession shouldn't worry about this volume, as these characters are yet to appear. Bottom Line Anyway you want this Novel if you like Vash at all.

Published by Thriftbooks.com User , 18 years ago
One of thee best animes ever is finnaly released in it's natural form! The manga is chock full of Triguny goodness. Vash is even cuter in black and white! I wanted to read it soo bad, and now it's finally out. It has beautifull artwork and the characters are as funny as ever. Sure it is the first volume, and you already know what happens, but it's still a great manga, and I love seeing it the original way. If you liked the anime, than you'll surely like the manga. And if you've never seen the anime, then you'll LOVE the manga! Anyway, it's a great anime and now it's a great manga as well. I hope you enjoy reading it!!^.^<see ya!
Copyright © 2020 Thriftbooks.com Terms of Use | Privacy Policy | Do Not Sell My Personal Information | Accessibility Statement
ThriftBooks® and the ThriftBooks® logo are registered trademarks of Thrift Books Global, LLC