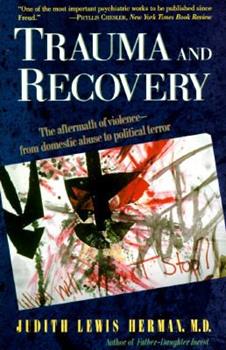 Trauma And Recovery: The Aftermath Of Violence--from Domestic Abuse To Political Terror

This work offers a new framework for understanding and healing. It asks are there parallels between private terrors like rape and public traumas such as terrorism?

This book saved my life.

Published by Thriftbooks.com User , 15 years ago
I am trying not to cry while writing this review because of the incredible impact this great work of Judith Herman has had on my life. I first read the book 4 years ago (I was 19 at the time), at the suggestion of my therapist. Today it remains one of only two books on the topic that I have kept. I will never let go of this book. This is probably the most comprehensive book on PTSD ever written. It is lauded by just about every psychologist I have ever met. I have an extensive field of knowledge in the area of psychology just based on experience and self-education, and this book is a clinician's book to the fullest. It is exceedingly intelligent, informed, and compassionate all at once. People who read this book that do not have PTSD find it heartbreaking and difficult-- people who DO have PTSD that read this book find it life-shattering. That's where it starts. It starts with an extremely in-depth look at the biological underpinnings of PTSD, the concept of narrative memory vs. traumatic memory, and discussion of studies that have indicated that survivors process traumatic memory in the brain differently than they process normal, or narrative memory. The underlying message at the outset is that people who have survived trauma are dealing with fractured schemas and fragmented concepts of self -- whereas people who have survived prolonged, repeated trauma early in life never were able to form a cohesive self or schema in the first place. In other words, we're building from scratch. I don't believe for me more terrifying words have ever been spoken. Herman's language is deeply compassionate but almost surgical in its painful precision. She is so thoroughly educated and validating that it is hard not to be nauseated because it's so true and it's so real and... she makes it real in a concrete, scientific sense, more than just the emotional, "I'm okay, you're okay" sense. You realize for the first time that PTSD isn't just a bunch of jumbled feelings, but a systematic medical disorder with very predictable symptoms and psychological implications. That's where the hope begins -- once you understand that PTSD symptoms are the same for everyone -- whether a war veteran, a survivor of domestic abuse, terrorism, or a natural disaster -- you realize how not alone you really are. Nearly everyone has experienced something traumatic, but only 15% develop PTSD as a result. Complex-PTSD (prolonged, repeated trauma) is even rarer. It's easy to feel alone because it's not something people often talk about. But this book makes you confident, not only that you aren't alone, but that what you are suffering is a real and professionally recognized medical condition. Once you learn your disorder back and forward, you can learn how to recognize its stages and how to treat it. You don't see it as who you are anymore, but rather an external force you are learning to cope with. You recognize your strength as a survivor. More importantly, you learn

Published by Thriftbooks.com User , 19 years ago
This book begins with an in depth history of the study (and understanding) of trauma and related disorders. Judith Lewis Herman provides aspects of feminist history not seen in other "popular" trauma literature. Judith Herman is a passionate and eloquent writer, and the excerpts written by survivors, that she includes throughout the book, are also poetic and beautifully articulated. She addresses that although trauma literature is now in abundance we must be careful not to abandon the continued study and education of psychological trauma. In addition she explains that there is always a backlash when the "unspeakable" is spoken, and she offers encouragement to remain standing against the repeated abuses of offenders and people who need to maintain their sense of a "just" world.While reading this book I truly felt understood. So many aspects of the trauma that I experienced (and the after effects) are explained in this book. She weaves together common ground for survivors of incest, rape, torture, war, captivity, and the holocaust. I felt that I was part of a greater community of people, and began to understand that I am not alone. This book is particularly valuable to the understanding of the long term and complex after effects of ongoing, repetitive childhood abuse/captivity (one of the best books on this subject). Other trauma books generally do not devote enough time to the complexity of long term childhood trauma. She explained the distinction between trauma-related symptoms and non-trauma related anxiety disorders, depression, psychosomatic disorders, and personality disorders. Often when this distinction is not recognized by health care providers survivors of trauma are misdiagnosed, given the wrong treatment and prescribed ineffective medications instead of dealing with the underlying trauma. On page 188 she says, "Even PTSD as it is currently defined, does not fit accurately enough [for survivors of prolonged trauma]." She has given a new diagnosis called "complex post-traumatic stress disorder". It was a relief to me because, although I have received great help from books on PTSD, a thorough understanding of long term trauma (beginning in childhood) has often been overlooked. Judith says on page 122, "It is an attempt to learn from survivors, who understand, more profoundly than any investigator, the effects of captivity." She took the words right out of my mouth.Another aspect of complex PTSD that she addresses is how to cope with the desire to withdraw from the world, and other people. She explains that it is a normal stage of recovery, and gives information on how to reconnect with the world and people. She also says that survivors of captivity often respond in this way: "Before taking any action, she will scan the environment, expecting retaliation."(p.91). In this book she goes into much greater depth on this topic.The chapter on child abuse also devoted considerable information about how incest survivors are often

A work of art in the field of psychology

Published by Thriftbooks.com User , 20 years ago
Was Judith watching us at home? Did she hide in the closet and take notes? You'll wonder if Judith Herman has the ability to see inside your thoughts after reading Chapter 5. As a survivor of child abuse and trauma, I was amazed by her ability to clearly define my thoughts, reactions and general "take" on life. If you are a survivor of ANY kind of trauma, READ THIS BOOK. My therapist, Dr. Zitlin in San Antonio, asked me to please read this book after one visit with him. Trauma and Recovery proves to me that recovery is actually possible. And in a way that just might work. This is like no other book I've ever read on trauma, child abuse or PTSD. I've read enough self help books to fill three hefty bags and finally I'm reading something that mirrors my own experience. It's compassion filled without losing credibility. Simply amazing. Please take the time to read this.

Published by Thriftbooks.com User , 20 years ago
Just read ch. 5 and you will be sold. As a person who has worked as a therapist with a variety of people and a variety of problems, I was stunned by the way that this book explains the impact of trauma. You need to read the concept of "complex ptsd," presented in ch. 6. Chs 5 and 6 elegantly present a framework for understanding people who have grown up in the fear of a terroristic household, whether with sexual abuse or not, whether with notable physical abuse or not. This framework acounts for the various problems suffered that are often described by clinicians as "borderline personality disorder," "somatization disorder," and other difficult/lets-ignore-them diagnoses. My feeling is that if you grew up in a scary, terroristic home, if you read chapter five you will believe this author was observing the whole time, and you may gain some insight into your own adult life and personality.
Copyright © 2022 Thriftbooks.com Terms of Use | Privacy Policy | Do Not Sell My Personal Information | Accessibility Statement
ThriftBooks® and the ThriftBooks® logo are registered trademarks of Thrift Books Global, LLC