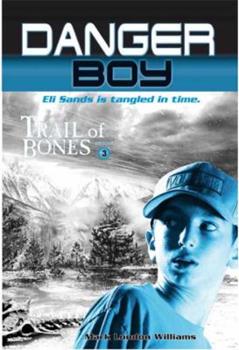 (Book #3 in the Danger Boy Series)

Danger Boy and his time-traveling companions are in for some shocking surprises when they meet up with an earlier expedition - the historical journey of Lewis and Clark. Fresh from a dangerous time-traveling mission, Eli Sands and his friends Clyne, the evolved dinosaur, and Thea, the scholar from Alexandria, are thrown into nineteenth-century America after an accident with their time-travel vessel. Unfortunately, Clyne is stranded alone in potentially...

An Enticing and Appetizing Read

Published by Thriftbooks.com User , 16 years ago
Recently coming from a dangerous time-traveling mission, Eli Sands and intergalactic friend Clyne the evolved dinosaur and an Alexandrian scholar Thea, are thrown into late nineteenth-century America after an "minor" mishap with their plasmachanichal time-travel vessel. Unfortunately, Clyne is separated from his friends in potentially hostile and unknown territory. While Thea and Eli on the other hand, pop up at the beginning of the famous Lewis and Clark expedition (pre-Sacagawea). After Thea is taken from Eli as she is mistook for an escaped slave and taken into the custody of president Jefferson (though he prefers to be called Tom). Eli then joins up with Captans Meriwether Lewis and Clark's "Corps of Discovery" whit the hope of finding his pal Clyne, that in turn will be a means to rescue Thea, and safe transportation home. However, while trying to escape the clutches of slave drivers and glory-hungry native warriors with hopes to regroup, the trio make an important discovery about their "unforeseen" stumble into 1804. It looks like they were attracted by a so called Prime Nexus, which they may have produced, which will surely change all of history to come. -Jackson Courey

Published by Thriftbooks.com User , 17 years ago
Eli Sands and his friends are trapped in 19th century America after an accident with their time-travel vessel, stranded in different times. Separated, the group must not only make contact with each other again; they must assure their accident doesn't change history itself.

science fiction and history in one place

Published by Thriftbooks.com User , 17 years ago
This is the first book I have read in this series, but it is still enjoyable on its own. It is well written, flows well, and kids will learn a lot of history without it being overdone. It has enough gross factor to appeal to boys, but not so much to turn off parents or a female reader (one of the secondary characters, who tells part of the story, is a girl). It will encourage kids to pick up the next book in the series...
Trustpilot
Copyright © 2022 Thriftbooks.com Terms of Use | Privacy Policy | Do Not Sell My Personal Information | Cookie Preferences | Accessibility Statement
ThriftBooks® and the ThriftBooks® logo are registered trademarks of Thrift Books Global, LLC