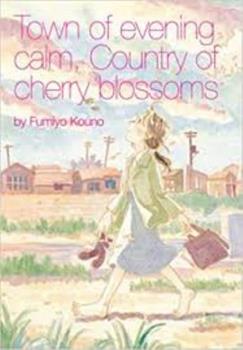 What impact did World War II and the dropping of the atomic bomb have on the common people of Japan? Through the eyes of an average woman living in 1955, Japanese artist Kouno answers these questions. This award-winning manga appears in English translation for the first time. Kouno's light, free style of drawing evokes a tender reflection of this difficult period in Hiroshima's post-war past. As the characters continue with everyday life, the shadow...

I dare you to read this & not get a little misty-eyed!

Published by Thriftbooks.com User , 13 years ago
Having read a synopsis about this manga, I knew I was in for some sad situations. I just didn't expect for this manga to get such a strong grip on my heart! During the first story, it was all I could do to keep from tearing up in the store!The book deals with the after effects of Hiroshima. Now some would expect to see some political message or some heavy drama ala Barefoot Gen. Well, both are there, but both elements are done subtly & creep up on you slowly. The first story in the book concerns a young woman called Minami, who has survived the blast. Her story tells of her horrific experiences, from trying to find her family amongst the dead bodies to her crippling survivor's guilt afterwards. The second story picks up further down the road & follows Minami's niece Nanami. While the second story (the first featuring Nanami) is fairly lighthearted, it does show the secondary effects of Hiroshima- how the blast is affecting the children born afterwards. The final story shows Nanami years later as an adult & is more serious in tone. Nanami follows her father as he goes off on one of his jaunts, only to discover that he is going to Hiroshima. Once she's there, she is told of her family's past as well as her father's feelings about the event itself. The first story in this book had me almost in tears. The emotions in this manga are so incredibly strong that it will take many by surprise. The artwork isn't as flashy as other books out there, but this was a wise move by the author. Kouno decided to let her story take front stage & the book is all that much more powerful for it. This is one book that I recommend every manga fan read at least once, if not buy. It's quite a few different emotions all tied up into one slender volume & it's one heck of a tale.

A microcosm of the personal horrors of the Hiroshima bombing

Published by Thriftbooks.com User , 14 years ago
In this slim but powerful work, Kouno accomplishes for manga what "Grave of the Fireflies" did for anime: it offers a sobering portrayal of the horrible effects of war on ordinary people. This is not the "view from 30,000 feet": there is no analysis of the reasons for the bombing, there is no blame assigned, there is no big picture summary. Instead, there is a very vivid, very real account of the short term and long lasting effects of the bombing on three generations of the "everyman" Hirano/Ishikawa family. Kouno has an amazing gift for portraying the dignity and aspirations of the common man and woman, and it is this juxtaposition with the cruelty and destruction of war that is most poignant and evocative. All three vignettes are excellent, but the first--"Town of Evening Calm"--is particularly so. I doubt that anyone could fail to be moved by it. Together, the stories are a reminder that for the survivors and their families, the war did not end ten years or even fifty years after the bomb was dropped: it is an inextricable part of their destiny even today. For an English-speaking audience, the stories are probably especially eye-opening: not just for its unblinking "insider's perspective" on the people who were bombed, but also for its look at the lingering and subtle discrimination these people face even today in modern Japanese society. This further compounds the complex feelings of the survivors and their descendants. "Town of Evening Calm, Country of Cherry Blossoms" is one of my all-time favorite manga, and one of my favorite works of fiction, period. This is the kind of work that lingers in the depths of the reader's mind and soul long after the final page is turned.

Published by Thriftbooks.com User , 14 years ago
I was deeply moved by this work. Rather than focusing on the immediate destruction of the atomic weapons that were used on Japan, the author draws us into the everyday life of some everyday folks, and the tragic, long-term consequences of the Bomb.

Published by Thriftbooks.com User , 15 years ago
I am an older fan of manga and I'll try to give almost anything a chance so when I saw Town of Evening Calm, Country of Cherry Blossoms in my recommendation list, I was curious and based on the summary alone, I bought it and I'm so glad that I did. The manga is actually two interconnected stories. The first is a quiet love story. Be sure to have a hanky ready as Minami's story will take you by surprise. The second story is a two-parter about Minami's niece and while it is not as quick to pierce the heart as the first story, the details that are revealed haunt and linger until it all comes clear. It is a rare "sequel" in that it tells its own story and yet it completes the first story in a most satisfying way. Because it isn't the standard manga that we have gotten used to, but I hope people give it a chance. Much as I love the manga that has become "mainstream", it is works like this one that expand the audience of this unique type of storytelling.

Published by Thriftbooks.com User , 15 years ago
It's undeniable that the translated manga market skews towards younger readers. It's doubtful that Fumiyo Kouno's Town of Evening Calm, Country of Cherry Blossoms will sell many copies. It has no torrid love story or super-powered teenagers. The stories contained within are slow, sad, and literary in their sensibilities. Town of Evening Calm is my favorite of the two stories in the collection. This takes place in Hiroshima, ten years after the dropping of the atomic bomb. Minami is a young seamstress who lives in the Atomic Slum. Like most people in the city, she is still haunted by the events of ten years ago. Her survivor's guilt is so intense that refuses to let herself be happy. This is a story about how she's going on with her life and trying to be at peace with herself. The two part Country of Cherry Blossoms is about how the effects of tragedy cross generations. This story features Nanami, niece of Minami. In the first part, Nanami is a happy-go-lucky fifth grader. In contrast to her childhood innocence, the second part picks up about a decade later. Nanami is now a slightly jaded adult who worries about the mental health of her aging father. Her father has been disappearing for days at a time recently, and she follows him on one of his excursions to Hiroshima. This gives her a chance to reconnect with her family's history and her own childhood. Town of Evening Calm, Country of Cherry Blossoms is a beautiful, melancholic collection of stories of how the past haunts the present. Although it may seem short for its price tag (it barely exceeds one hundred pages) I'm sure it will enchant mature readers with its lovely art, haunting atmosphere, and subtle character-driven story-telling. I found it beautiful in every way a story can be. That's the highest praise I can give.
Trustpilot
Copyright © 2022 Thriftbooks.com Terms of Use | Privacy Policy | Do Not Sell My Personal Information | Cookie Preferences | Accessibility Statement
ThriftBooks® and the ThriftBooks® logo are registered trademarks of Thrift Books Global, LLC