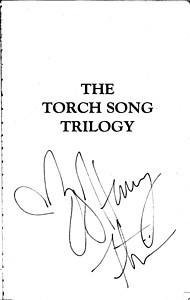 Characters: 4 male, 2 femaleTony Award Winner, Best Play 1983 Includes: The International Stud, Fugue in a Nursery, Widows and Children First "A very funny, poignant and unabashedly entertaining work... This description may be from another edition of this product.

Published by Thriftbooks.com User , 17 years ago
In 1988, the film version of the Tony Award-winning, landmark play "Torch Song Trilogy", which was written by the outspoken and very witty Harvey Fierstein, was released to theaters. Written originally as three separate one-act plays between 1978 and 1979 ("The International Stud", "Fugue in a Nursery" and "Widows and Children First"), Harvey Fierstein combined them into the more familiar three-act play "Torch Song Trilogy" in 1981 since each one-act play focused on the life of a gay man named Arnold (played by Harvey Fierstein), who is a gay drag-show entertainer. In the first act, Arnold meets a stranger at a bar named Ed (Brian Kerwin). A precarious relationship develops quickly between Ed and Arnold, but Ed also wants to marry a woman named Laurel (Karen Young). In the second act, Arnold meets a young man named Alan (Matthew Broderick) at the club where Arnold performs. A long-term relationship develops between Arnold and Alan until an unexpected tragedy occurs. The third act focuses on Arnold taking care of a teenaged son, David (Eddie Castrodad) that he & Alan had adopted, as well as Arnold's ongoing difficulties with his mother (Anne Bancroft).With excellent dialog, engaging personalities and superb acting, "Torch Song Trilogy" is a fantastic film, demonstrating not only the love that exists within gay couples, but also the very real difficulties that many gay men face in their daily lives, including the all-too-often difficulties with family members who cannot accept them for who they are. Harvey Fierstein's unique voice adds a special flare to his drag show performances, as well as to his arguments with his mother. Anne Bancroft's performance is superb and emotional. Matthew Broderick did a wonderful portraying Alan. Interestingly, he had played the teenaged son David when "Torch Song Trilogy" was being performed on stage as a play. Brian Kerwin and Karen Young also portray their roles well. Other significant characters in the film include Bertha Venation (Charles Pierce), Marina Del Rey (Alex Vera), the young Arnold (Benji Schulman) and Murray (Kevin Page). Overall, I rate "Torch Song Trilogy" with 5 out of 5 stars. It's especially great to be able to watch the film on widescreen DVD.

Welcome to DVD Arnold. I've been waiting for you.

Published by Thriftbooks.com User , 18 years ago
I was delighted to find that at long last, "Torch Song Trilogy" was finally on DVD. If you are not familiar with this film, it is a must see. A delightful, funny, gentle and moving film. For those not familiar, to put it in the context of time, it was one of the first movies with a positive image of gay characters.I go way back with Torch Song. In the 1970's I saw, "International Stud" in the Village (I believe it was a theatre on Bleecker St.) I also remember seeing it as an entire triology off off Broadway when it was presented by the Glines (I seem to remember that the ticket cost $5 with a coupon, or was it 2-for $10 with coupon?)Harvey Fierstien is to be applauded. We take for granted the more positive image we see of gays today (although apparently, we have progressed from the film images of where we kill ourselves, to the television images of where we are only acceptable if we are making straight people happy and so that they can marry each other, while we ourselves are not allowed to get married).Torch Song represents hope, love, and pride.A big plus on the DVD is the not to be missed commentary by Harvey. Thank you Harvey for writing this. Thank you for being a pioneer. Gez ... where is this review going? Somewhere in the background a drag queen is beginning to sing the "Battle Hymn of the Republic!"

Published by Thriftbooks.com User , 22 years ago
This is an classic. It will make you laugh, cry, get angry, and, if you have any compassion whatsoever, it will touch your heart. I am straight. I say that only in the hope that other straight men will give this movie a chance. Certainly the homophobes of the world would not consider watching this excellent film and that's their loss. The cast does a wonderful job. Harvey Fierstein is fantastic. His character is rich and deep and that's due in no small part to the fact that Harvey is rich and deep. Anne Bancroft does a great job as the mother trying to understand and cope. Matthew Broderick and Brian Kerwin play their roles with a great subtlety. It would have been easy to camp it up as stereotypical gays but they gave their characters more class and style. Certainly influenced by Harvey.Take an evening. Sit quietly. Eliminate distractions. Focus on the film. And enjoy. It would surprise me if you didn't agree that this is a superb movie.

Excellent makeover of the play into a movie!

Published by Thriftbooks.com User , 22 years ago
This is an offbeat story of a gay female impersonator in his seach for love and a committed relationship. Primarily psychological drama with excellent insights and incisive dialog. Anne Bancroft is great as the Jewish mother, and Harvey Fierstein, who wrote the original play, brings so much angst and personality to his portrayal of the main character that I just couldn't help wishing I knew someone like that in real life. Highly recommended if you want to know more about a lifestyle most people have never seen.

Touching, Emotional, Special, A Must See

Published by Thriftbooks.com User , 23 years ago
Harvey Fierstein, Anne Bancroft, Matthew Broderick and Brian Kerwin combine in a bitter-sweet comedy-drama set in the 1970's, concluding in 1980. The "Trilogy" is a collection of 3 specific pieces blended together telling the saga of Arnold Beckoff (Fierstein). The story revolves around love, relationships and family - something everyone can relate to. It was a movie before it's time when it premiered in 1988. It is straight-forward and to the point. It will make you laugh and cry and understand the true meaning of love and respect. Harvey Fierstein & Anne Bancroft (Arnold's Mother) are outstanding in their roles. A must see for anyone trying to understand the complexity of love. A well-done adaption to the screen from theatre. Add this video to your collection!
Trustpilot
Copyright © 2022 Thriftbooks.com Terms of Use | Privacy Policy | Do Not Sell My Personal Information | Accessibility Statement
ThriftBooks® and the ThriftBooks® logo are registered trademarks of Thrift Books Global, LLC