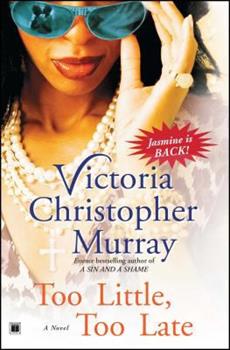 Too Little, Too Late

Jasmine, a reformed man-stealer, must fight to keep her own husband from falling prey to an ex's devious designs, while desperately hiding her own closely guarded past. Will Jasmine finally find the courage to reveal her secrets, or will her marriage be torn apart by lies? No one writes about family drama, relationships and hot-button issues like Victoria Christopher Murray, and here she's crafted a riveting tale that is sure to appeal to fans of...

Too Little, Too Late is Devine

Published by Thriftbooks.com User , 13 years ago
I totally enjoyed "Too Little, Too Late". Jasmine began to grow on me in "A Sin and A Shame". Although, she wrecked havoc in many lives, it takes two to tango. I truly believe that she's a better person now that she's allowed God into her life. People can and do change. I felt that Hosea was a bit hypocritical at times. He was distraught to discover Jasmine's lies (there were many) yet he lied continuously about being in Natasia's presence. Hosea easily fell for Natasia's manipulation. It took him much too long to realize that Natasia had several tricks up her sleeve. Natasia was parallel to a blemish that refuses to vanish. Poor Jasmine had certainly met her match. She was even more threatening because she didn't have God in her heart. For me, the Brian / Alexis story ended sadly. I was hoping Alexis would forgive Brian for his "affair" with Jasmine. Mae Frances is a riot. Her character showed the most growth although she's still a force to be reckoned with. A fascinating story filled with remarkable characters who struggled to live life righteously.

The Bad Girl Jasmine is back....

Published by Thriftbooks.com User , 13 years ago
In Too Little, Too Late, Jasmine and Hosea Bush are happily married and over their previous marital issues from A Sin and A Shame. Jasmine is a new women (or so she says) and promises never to hide anything from Hosea again. The couple decides to renew their vows and after the joyous occasion, Hosea announces that his family is moving to California for three months. During the chaos of their move an old flame of Hosea's decides to make an unfortunate appearance into the Bushes life. She's young, attractive and the love of Hosea's life. Will he be able to resist? While Hosea is in the mist of dodging advances from an old flame, Jasmine is trying to not to slip back into her old deceiving ways. Will she succeed? But that's not all; a second marriage hangs in jeopardy due to adultery. That relationship is Brian and Alexis Lewis's. Alexis, who has been in the dark about Brian's cheating for years has finally gotten wind of her husband's deceitful ways. Will their marriage be able to survive years of cheating and deceitfulness? I think Victoria Christopher Murray really outdid herself in this book. Jasmine's character has evolved light years from her former scandalous persona in Temptations. But even though things change, some things stay the same. When threatened Jasmine retaliates in the worst way. She is so busy trying to cover up lies from her previous life that she can't enjoy the present. In this book it is evident that Jasmine has not yet learned to let go and let God. She still believes that her way is the best way and that's where all her problems start. Brian Lewis is trying to turn over a new leaf but he is being dragged back into the past by his lies. He was a more likable character than jasmine because I felt like he really wanted to turn over a new leaf. All in all I feel like this book was a great selection and I highly recommend it to fans of Victoria Christopher Murray's work. Joi Nichols Houston Divas Bookclub Reviewer

And The Truth Shall Set You Free

Published by Thriftbooks.com User , 13 years ago
There are very few sequels that I really enjoy. There are even fewer three- peats that I enjoy, but author Victoria Christopher Murray pulled out all stops with Too Little,Too Late. Jasmine Larson Bush is back and is still trying to help God with all her schemes and lies. Only, this time Jasmine's schemes and lies not only affect her life with her husband, Hosea, but they follow her across the country and Brian, her baby daddy, becomes caught up in the mix. But, as always, God shows up and reminds her that He is in charge and does not need her help. In June 2006, Jasmine and Hosea are living the good life. They have overcome the many obstacles that caused division in their marriage in the last book. As the couple head to the altar to renew their vows and start anew, Jasmine still has a few secrets she cannot quite tell her husband. When Hosea announces that the family will be moving to Los Angeles for three months, Jasmine is worried, but confident her secrets will be safe. Also in June 2006, Alexis follow her husband to what she suspects is a secret rendevous. Can their marriage survive when Brian's secret come to light? In August 2006, the couples meet, and not under the best of circumstances. Hosea and Jasmine agree to meet with Brian when Alexis happens upon the scene. What she sees sends her world spiraling out of control. Will the lives of these two couples ever be the same? You have to read Too Little, Too Late and find out the answer. Be prepared because there are some jaw dropping moments that will have you screaming, gasping and laughing out loud. I loved how Victoria wrote this novel in three parts. Jasmine and Hosea's story, Brian and Alexis' story and then the story of Jasmine, Hosea, Brian and Alexis. Also, it is always a pleasure to read about Mae Francis, a wise woman with a past like Jasmine's, who has made a complete turnaround. I highly recommend this book. Jeanette Motown Review Bookclub APOOO BookClub

The Truth Shall Set You Free

Published by Thriftbooks.com User , 13 years ago
In Too Little, Too Late, Victoria Christopher Murray brings back Jasmine Larson. She is living happily with her husband, Hosea Bush. That is until the secrets that she kept from him start to appear one after the other. Not only does Jasmine have secrets, but Hosea seems to have secrets of his own. His ex-fiance, Natasia, appears as a new edition to Hosea's show, Bring It On. They are scheduled to be in Los Angeles, for a three month project. Jasmine recognizes immediately that Natasia is a woman cut from the same cloth as she. Natasia is in it to win her man back. Jasmine does all she can to stop her from breaking up her marriage. Meanwhile, Jasmine has to deal with the deceit that has her reluctant to return to Los Angeles and running into Brian Lewis, her former lover. Brian has his own issues with being a sex-addict and trying to save his marriage with his wife, Alexis. He thinks she can handle him sleeping around more than she can handle him having a baby with Jasmine Larson. Jasmine almost broke up the marriage of her best friend. Can Hosea forgive Jasmine, yet again, for the lies? Will Natasia succeed at getting her man back? Will Alexis be able to handle that Brian is a sex-addict AND slept with her enemy?? Murray takes us into the lives of these two couples and airs ALL of their dirt. You did not have to read the other books, Temptation or A Sin and A Shame, in the life of Jasmine, to know what is going on to be TOTALLY invested in the characters. You do not know whether to root for Jasmine to win or to have her really pay for all of her deceit. But you will love every minute of this book! I could not put the book down. Murray combines true life drama with biblical principles. Too Little, Too Late is EXCELLENT! Donnica Copeland Sista Talk Book Club APOOO BookClub

You Made Your Bed, Now Lie In It!

Published by Thriftbooks.com User , 13 years ago
Jasmine is a wicked and immoral person who gets what she wants regardless of who she has to hurt. She has done many unpleasant things to people in the past and as a result now has many old secrets. Jasmine marries, Mr. Hosea Bush, a minister, who has accepted Jasmine's devilish ways. Hosea stuck with Jasmine through good and bad times and accepted the past as the past as they tried to maintain a healthy marriage together as a family. Jasmine's daughter, Jacqueline, was the main reason that Hosea stayed with Jasmine. When Natasha reappears in Hosea's life, all hell begins to break loose. She begins to intimidate Jasmine with her little skills and tactics to gain Hosea's love. Jasmine is no fool, though. Game always recognizes game! Brian Lewis, the father of Jasmine's child's, has problems with his wife, Alexis. She thinks that he is being unfaithful to her. Brian is forced to prove to her otherwise, and that may entail digging up old secrets from the past. "Too Little, Too Late" by Victoria Christopher Murray is an excellent read. It is one of the best sequels I've read! This book is definitely a page turner and I will be looking forward to more of Murray's books in the future. Keep up the good work! Reviewed by: Tekisha
Copyright © 2020 Thriftbooks.com Terms of Use | Privacy Policy | Do Not Sell My Personal Information | Accessibility Statement
ThriftBooks® and the ThriftBooks® logo are registered trademarks of Thrift Books Global, LLC