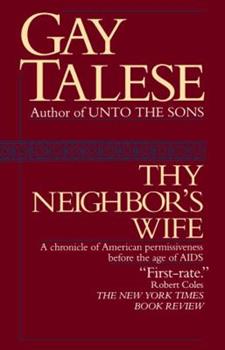 "Engrossing and provocative." Library Journal Bestselling author Gay Talese's exploration into the hidden and changing sex lives of Americans from all walks of life shocked the world when it was first published in 1981. Now considered a classic, this fascinating personal oddysey and revealing public reflection on American sexuality changed the way Americans looked at themselves and one another.

An author gets lucky

Published by Thriftbooks.com User , 12 years ago
I recall reading a chapter of "Thy Neighbor's Wife" in a magazine (Esquire, probably) when it came out in 1980. It was interesting but not so interesting that I went on to read the book. I am pleased that I waited until now. Things have happened in the past 30 years - or at least, things have been revealed - that make Gay Talese's book more piquant than it was. In the early '70s, Talese set out to document "the quiet rebellion that he (writing in the third person) sensed within the middle class against the censors and the clerics that had been an inhibiting force since the founding of the Puritan republic." There was, then, nothing quiet about the rebellion among wide segments of the public. The endless "Playboy Philosophy" in the biggest selling skin mag was made as loud as Hugh Hefner could make it, to take one example. But Talese had a point. The work-a-daddy middle class was chary of announcing where the gossips could hear that it endorsed the so-called Sexual Revolution. Today, of course, you can hardly get it to shut up. That behavior, as opposed to keeping up a front, changed very much is to be doubted. Even before "Thy Neighbor's Wife" came out, the historian Page Smith had published his father's letters ("A Letter from My Father," 1976) detailing the life of a randy Republican in the era of unbridled comstockery. Talese tells, in amusing and massive detail, how pretense was riddled, shot to pieces and fell. Brave, independent but, as Talese acknowledges, socially not very attractive men did it, and some like William Hamling went to prison for long years before the prudes were squelched. What is so wonderful, now, about "Thy Neighbor's Wife" is that the principal villains, the Catholic church and Charles Keating, have subsequently been exposed for the vicious frauds they always were. If Talese had any inkling that the church was running a world-wide child-rape ring, he suppressed it. Keating's corruption took a different form and was revealed later, although it is sobering to realize that as recently as last year one of his stooges nearly got elected president of the United States. Few writers have been so lucky in their choice of villains. There were plenty of others he might have picked, and not all have been exposed. It requires some patience to deal with this tome. In form, he follows the careers of several people who were agents in what was either the sexual awakening or the sexual unwrapping of the American middle class, but with long excursions into the past. These include the career of Anthony Comstock, the utopian communes of the 19th century and other background noise. The individual stories are interrupted for long periods, but over and over, two or three strands are later knitted together in unexpected ways. Even Talese stops to remark about how many of his principals started out in Chicago. Most famously, Hefner. The only real surprise in the book was learning that it was Mrs. Hefner, not Hefner, who was the first to g

Published by Thriftbooks.com User , 20 years ago
Depending on your outlook, author Gay Talese's rambling social history of sex in America is either X-rated titillation or scholarly and objective reporting of a serious subject that affects virtually everyone. The author takes the reader through a maze of people and events from the triumphs and tribulations of Hugh Hefner to pornography and the courts, from free-love religious sects of the 19th century to 20th century California communes. The reader also visits massage parlors and organized mate swapping clubs. The premise is that everybody behaves sexually, regardless. Pretending otherwise is a myth perpetuated by the oppressive cycle of American Puritanism handed down by a variety of parental, religious, and legal authorities. We should just accept our sexuality and be honest with each other, and especially with ourselves. Although the author refrains from preaching a "if it feels good, do it" sermon, complete sexual freedom is the rather trite theme. This viewpoint is somewhat dated and reflects the so-called sexual revolution of the '60s and early '70s. The book was published in 1980 before the AIDs threat was a common concern. Some hot button issues as abortion and homosexuality are ignored. Nevertheless, it is an interesting book on a controversial subject. ;-)

Published by Thriftbooks.com User , 21 years ago
Talese's history of the sexual revolution in America reads like a Jackie Collins novel or plays like a Robert Altman movie where all of a sudden, the characters stories have crossed paths and their lives after were irrevocably changed. You will read the page turning account of how Hugh Hefner came to create Playboy Magazine--a story which indeed has been often told, but not like this--interspersed with various obscenity cases of Screw Magazine publisher/editor Goldstein, the coming of the age of Larry Flynt and Bob Guccione, and the story of our gal Betty...Talese outdid E! entertainment by two decades. It is a great rendering from one of our most talented writers.

Published by Thriftbooks.com User , 21 years ago
Gay Talese does a brilliant job of narrating the evolution of sexuality during the 20th century. By thoroughly including all the movers and shakers in the development of censorship legislation, sex shops, massage parlors, communes and sexual revolutionists in enthralling detail, Talese manages to create a riveting tale of human sexuality. By infiltrating the sexual revolution of the 60's and 70's, Talese offers first-hand accounts. He artfully balances his keen observations as a slightly removed journalist with indulgent, self-purposeful experimentation, then masterfully conveys his findings to his audience. Like "Honor Thy Father", Talese invests a great deal of time and risk in researching his material and the result is a page-turner. While he tends to mention numerous names of people who shaped 20th century sexuality, the result is not overwhelming but instead may inspire you to keep a list of names as you read through the book with the intention of researching these people yourself. Indeed, this masterpiece flows with gripping narrative style, introducing characters that seemingly have no relationship to one another, until you read further and find that their influence is intricately commingled. This book will fascinate you with its exploration and understanding of American sexual identity. A must read!
Copyright © 2020 Thriftbooks.com Terms of Use | Privacy Policy | Do Not Sell My Personal Information | Accessibility Statement
ThriftBooks® and the ThriftBooks® logo are registered trademarks of Thrift Books Global, LLC