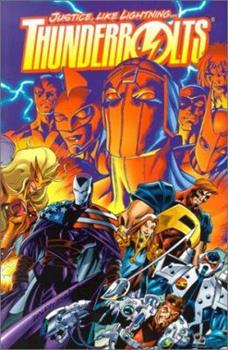 This description may be from another edition of this product. Written by Kurt Busiek and Peter David. Art by Mark Bagley and Mike Deodatpo, Jr. Published in November of 2001, Softcover, full color. Cover price $19.95. If you want additional books, I ship as many...

Where it all started

Published by Thriftbooks.com User , 14 years ago
All the worlds premier superheroes had just seemingly killed. The world without any hope in this world without heroes (nobody gives Spidey any credit, he was still around) got a strange and powerful new super team. The Thunderbolts!! A group of villains pretending to be heroes! And the world like an abandoned/abused teenage girl accepted them pretty fast! I still think it's funny how Marvel through out the years has done a lot of stories where the avengers are being scrutinized by the government and then the Thunderbolts just waltz right in and everybody is like okay; let's treat them like the heroes they are! At the time it was new and interesting. The Thunderbolts now are different and that is a good thing because that shows growth but these stories were the most interesting even though I knew from the start that to continue this series the Thunderbolt were going to have to actually become heroes because they weren't going to pull that ruse of being heroes forever sooner or later we all that Zemo was going to try and take over the earth and somebody was going to have to stop him.

One of the last Marvel hero titles

Published by Thriftbooks.com User , 19 years ago
Marvel has undergone a renaissance in the last few years (in terms of creativity, if not sales) but they have definitely neglected their traditional audience. Thunderbolts was a product of the old administration and was a real Marvel book in style and substance. However, its now to be replaced by a hip (= embarrasingly dated within 5 months) version of Supervillain Fight Club, with zero connection to the original idea (and zero likeability). Avoid that travesty, buy this TPB which showcases some of their earliest and best stories

Published by Thriftbooks.com User , 19 years ago
These guys were always my favorites. Before thast fateful day where I lost interest in comic books, I had every single issue. The first few year or so's worth of stories are still the best, where we get the bad guys NOT becoming sudden heroes, which was something unheard of in Marvel superhero books. The last page of the first issue is a classic. The stuff collected in this TPB is gold.

BUY THIS TPB review from marvelmasterworks.freeservers.com

Published by Thriftbooks.com User , 19 years ago
Justice Like Lightning reprints the first 4 issues of Thunderbolts, Annual 1997, their first appearance in Incredible Hulk #449, the T'Bolts story in Tales of the Marvel Universe, and Spider-Man Team-Up #7. What this collection amounts to is a gathering of the stories of their formative days as a team, and the unveiling of the master plan behind the concept of the T'Bolts.If you haven't read this book, and don't know anything about the T'Bolts, you are in for a very special treat. The premise around this collection revolves around a very special concept, one which should blow you away when you discover it on your own. So get this book, skip the excellent Busiek introduction, and just start reading! There are spoilers on the front cover, back cover, and intro, so do your best to avoid them! AVOID THE SPOILERS! You'll thank yourself for it later!The T'Bolts had their start in the aftermath of Onslaught, which, to the flesh and blood citizenry of the Marvel Universe, seemed to claim the lives of the world's greatest heroes, among them the Avengers and the FF. What's left of the world's remaining heroes can barely keep up with the defense of all that is good and decent, and so it is that a new team of costumed adventurers- the Thunderbolts- step in to save the day! With derring-do and good-guy gusto, Citizen V and his band of adventurers earn the graces and honest thanks of a world in peril by beating up the bad guys that threaten it's stability.Heard it all before? I don't think so....do yourself a favor and catch up with the T'Bolts. The art is great, and there is the wonderful "origin" Annual with the legendary Gene Colan getting to draw a cameo of Daredevil (an unexpected treat!) The paper quality is excellent, too. This is a very nicely done trade package.

Superheroes? with more twists and turns than Bill Clinton

Published by Thriftbooks.com User , 19 years ago
In a major coup Kurt Busiek and Mark Bagley certainly surprised the fans with one of the greatest unexpected endings in comics. However, even without the shock of this revelation, the series is a superb example of good solid storytelling. The twists and turns will indeed keep you wanting more. This tale of redemption and villainy is the best new 'old-style' Marvel comic for a long timeThis excellent graphic novel includes the initial appearance fighting the Hulk as well as the first few issues of their own comic, which is currently going through another purple patch under the guidance of Fabian Nicieza
Copyright © 2020 Thriftbooks.com Terms of Use | Privacy Policy | Do Not Sell My Personal Information | Accessibility Statement
ThriftBooks® and the ThriftBooks® logo are registered trademarks of Thrift Books Global, LLC