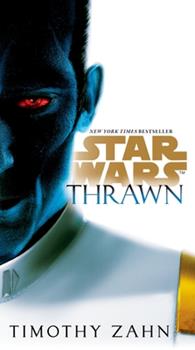 NEW YORK TIMES BESTSELLER - In this definitive novel, readers will follow Thrawn's rise to power--uncovering the events that created one of the most iconic villains in Star Wars history. One of the most cunning and ruthless warriors in the history of the Galactic Empire, Grand Admiral Thrawn is also one of the most captivating characters in the Star Wars universe, from his introduction in bestselling author Timothy Zahn's classic Heir to the Empire...

An Excellent Book for Fans of Star Wars

Published by David Walby , 1 month ago
tar Wars: Thrawn, by Timothy Zahn, was an amazing read. It tells the story of Grand Admiral Thrawn from the point where he was discovered by the Empire up to the point where he appears in the Star Wars: Rebels animated series. One of my favorite things about this novel is that Zahn maintains Thrawn’s calm and collected demeanor throughout the entire novel. We see his tactical genius unfold, yet it never seems entirely unrealistic nor does the hand of the author ever seem overtly present. The Sun Tzu-esque introductions to the chapters really add to the overall feeling of the book Not only do we hear the story of Thrawn, but we also hear the origin story of Arihnda Pryce as well. Her’s is a story that one wouldn’t expect to intertwine with that of Thrawn’s but she ends up being an unlikely foil to the blue chiss. Timothy Zane has done an amazing job here and I have every intention of reading the following books in the series. An easy 5/5 stars for me.

Zahn is the Star Wars master

Published by Matt M , 3 years ago
Spectacular! A fan from the time of the original Thrawn trilogy, I went in to this one with trepedation. How does Thrawn fit into the new canon? The answer is: perfectly! It seems Zahn had a monumental personal and professional goal to meet. His previous, beloved characters had been mostly erased, and Zahn deftly weaves so much of his previous work back in to the fold in entertaining and nuanced fashion.
Trustpilot
Copyright © 2022 Thriftbooks.com Terms of Use | Privacy Policy | Do Not Sell My Personal Information | Cookie Preferences | Accessibility Statement
ThriftBooks® and the ThriftBooks® logo are registered trademarks of Thrift Books Global, LLC