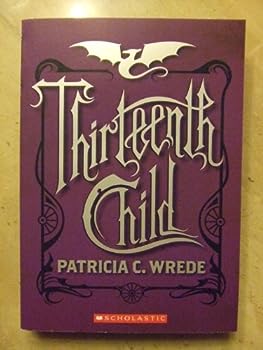 (Book #1 in the Frontier Magic Series)

#1 NYT bestselling author Pat Wrede returns to Scholastic with an amazing new trilogy about the use of magic in the wild, wild west. Eff was born a thirteenth child. Her twin brother, Lan, is the... This description may be from another edition of this product.

Published by Chelsea , 5 years ago
This was a really fun book and looks like a great series. Patricia C. Wrede is a wonderful author who is really good at giving descriptions and helping the reader get into the minds of her characters. I look forward to seeing what happens next.

Published by Thriftbooks.com User , 13 years ago
As always Patricia C Wrede has written a book that is stimulating on all levels. She has such an uncanny knack for writing things that are both exciting, fantastical and humourous. She has taken two worlds that aren't normally connected and seamlessly worked them together. Her sense of character development and dialogue style make me read every book by her that I can get my hands on and this one is certainly among the exceptional of her work. I settled down for an entertaining, yet intellectually stimulating read and was not disappointed in the least! I can't wait to read more!!!!

Published by Thriftbooks.com User , 13 years ago
This is a great alternate history of the western expansion where witches and wizards are just as important as the founding fathers! When Eff receives nothing but grief from neighbors and family alike for being the 13th child her parents decide to take a postion at a University on the edge of the magical divide. The kids are excited and afraid of what awaits in this new frontier...the boys can't wait to see the Wooly Mammoths but Eff can't wait to be in a place where no one knows she is the 13th child! Wrede does a wonderful job of character development and I love the introduction of the Realists who believe that they can conquer the frontier without magic. This book will keep you captivated from the first page - I loved it!

Can't wait for the next book!

Published by Thriftbooks.com User , 13 years ago
Too many others have made the "Harry Potter meets Little House" comparison. However, this book really has the potential of each of those series. The magic system is fascinating, and it's a treat to follow as the main character learns this unusual system, and implements it successfully in the climax of the story. A lot of the press on this has made much of the absence of Native Americans. I noticed the absence as I was reading, and saw it as a part of the plot development. Where is the antagonistic magic the settlers are facing coming from? I'm really hoping the Avropan and the Native magic uses will meet in the next book, and that any conflict between them will be amicably resolved by the end of the series. Wow! What a great book!

Published by Thriftbooks.com User , 13 years ago
Francis (nicknamed Eff) was born the 13th of 14 children. While her twin brother Lan (#14) is lauded for his potential as a natural magician (he is the 7th son of a 7th son), Eff is tormented and told that she'll turn evil. After her Uncle Earn tries to get her arrested for supposedly cursing his house when she was 4 years old, Eff's father decides to accept a University position (Magic instructor) out west to get both children away from the harmful influence on both twins; falsely glorifying one child, while falsely belittling the other. Eff's mother puts it best: "I can see plain enough that an angel straight from heaven itself would grow up crooked if she was watched and chivvied and told every morning and every night that she was sure to turn evil, and I can see equally plain that fussing and fawning over a child that hasn't even learned his numbers yet, as if he were a prince of power and wisdom, will only grow him into a swell-headed, stuck-up scarecrow of a man, who like as not will never know good advice when he hears it, nor think to ask for it when he needs it." Eff's family moves to the North Plains Territory east of the Great Barrier. The Great Barrier is a magical barrier that keeps creatures like Mammoths, woolly rhinoceri, swarming weasels and spectral bears on the west side of the barrier. The oldest of Eff's siblings stay in the east (either to marry or go to University) and for the first few years in the new territory, no one mentions that Lan is the 7th son of a 7th son or that Eff is a 13th child. Eff's first 4 years of life made an indelible impression and she is convinced that someday she will go bad. It preys on her conscience and finally she confesses to her magical teacher, Miss Ochiba. Miss Ochiba teaches the students to look at ordinary things in multiple ways and points out that Eff is also a 7th daughter, the first born of twins, and many other things besides a 13th child. When strange creatures start to overwhelm settlers west of the Great Barrier, a 13th child may be the only one to see the solution. >>>>>> <br />I've been anticipating this book since I first heard Ms. Wrede give a reading last August and "The Thirteenth Child" doesn't disappoint. Ms. Wrede's world-building is complete with an alternate history (Lewis and Clark never made it back from their expedition), and has that sense of adventure that the frontiersmen had when they explored the west. From different theories of magic to people who don't believe in using magic at all, the world Eff lives in has a depth and complexity worth exploring.
Trustpilot
Copyright © 2022 Thriftbooks.com Terms of Use | Privacy Policy | Do Not Sell or Share My Personal Information | Accessibility Statement
ThriftBooks® and the ThriftBooks® logo are registered trademarks of Thrift Books Global, LLC