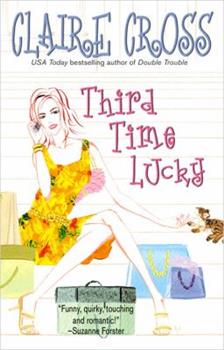 (Book #1 in the The Coxwells Series)

First time in trade: the USA Todaybestselling author's "cross between a Julia Roberts romp and an episode of Seinfeld. Philippa Coxwell always gets the math wrong. After two maddening experiences with Nick Sullivan, she has to decide if the third time's the charm-or if she's finally old enough to know better.

Published by Thriftbooks.com User , 14 years ago
Twice before, Nick has come into Phil's life and changed it for the better. Twice before, he's left without a word. Now he's back, asking for her help. Nick has come back to his hometown in response to a summons from his domineering grandmother, only to find her lying in a pool of blood, a dagger in her neck. Fearing a frame-up, he turns to childhood friend Phil who, to his surprise, is not a lawyer. However, when Phil investigates, there's no body, no blood, and she suspects Nick is trying to trick her. Both Nick and Phil have family issues. Phil has, because of Nick's previous influence, broken away from the family expectation of becoming a lawyer, but her family still makes their demands felt. Nick has lived away from what remains of his family--his brother and his grandmother--for some years, but he still feels responsible for his brother. Third Time Lucky is about taking control of your life, and finding love along the way. It's about family expectations and responsibilities. It's about trusting your heart and taking a risk. Claire Cross is one of my favorite authors, and Third Time Lucky is one of the reasons. The characters are realistic, with real problems that they overcome during the book. The plot is a page-turning balance between screwball comedy and mystery. It made me laugh, brought tears to my eyes, and put me on the edge of my seat. Just a wonderful read.

Published by Thriftbooks.com User , 20 years ago
Claire Cross writes some of the best dialogue ever read in this type of book, sprightly and fun. Her heroine has an outlook on life and a turn of phrase so clever that this character borders on genius. Still, the romance genre itself is limiting. THIRD TIME LUCKY conforms to the genre with a single storyline that is linear and ultimately predictable. There is an additional plot about the heroine's business partner that could have been expanded, but that would have taken the novel outside the limitations of romance novels. Also, the mystery which drives this tale wasn't explored thoroughly enough to be exciting, though the book starts with great promise. Nonetheless, THIRD TIME LUCKY is an easy read, and a fun one. I look forward to Ms. Cross's next book in this series.

Published by Thriftbooks.com User , 21 years ago
Fifteen years ago he left Rosemount and his buddy overweight Philippa Coxwell behind. Only his beloved, but estranged grandmother Lucia "Dragon Lady" Sullivan could get Nicholas to return home. When she asks him to do so, he leaves behind his successful Seattle adventure travel company for New England. Nick arrives at Lucia's home only to see the gory corpse of his murdered grandmother. When Nick hears the siren, he flees the crime scene. Fifteen minutes later, Lucia rises, proud of her first act performance teaching her favorite grandson a lesson in life.Nick turns to the only person in the area he trusts, his high school buddy Phil for legal advice. Phil always loved Nick. He is stunned to learn she never became a lawyer, but instead became a garden advisor. Unable to resist Nick, she accompanies him back to Lucia's home to find no body. Feeling he played her for a fool, an angry Phil tells him to leave. However, Nick realizes that he needs Phil for more than just moral support, but can he commit to her if he is lucky enough for her to allow him a third time in her life?THIRD TIME LUCKY is a screwball comedic romance that stars several interesting charcaters. The convoluted, yet charming story line works because of the interrelations between the cast, especially Lucia's overriding influence and the brother of Nick's injurious behavior. Nick and Phil are an ideal couple even if he is a bonehead unable to see clearly that she is his love. Claire Cross writes a warm, witty, and often wild novel that shows the expanse of her talent.Harriet Klausner
Copyright © 2020 Thriftbooks.com Terms of Use | Privacy Policy | Do Not Sell My Personal Information | Accessibility Statement
ThriftBooks® and the ThriftBooks® logo are registered trademarks of Thrift Books Global, LLC