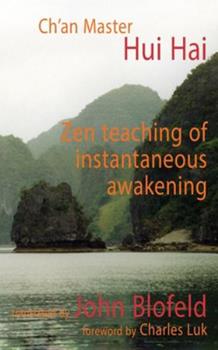 Zen teaching of instantaneous awakening A complete translation of the teaching of the Chinese Ch'an Master Hui Hai by John Blofeld, with a foreword by Charles Luk Hui Hai, was one of the great Ch'an (Zen) Masters. He was a contemporary of both Ma Tsu and Huang Po, those early masters who established Ch'an after the death of Hui Neng, the sixth Patriarch. Hui Hai's direct teachings point immediately to this moment of truth and awakening, and the message...

Published by Thriftbooks.com User , 12 years ago
Translator John Blofeld also translated "Zen Teaching of Huang Po" which is one of my favorites. Blofeld wrote in the introduction: "In a way, the present work is complementary to The Zen Teaching of Huang Po; for, while both masters carry us to the very heart of things, Huang Po deals rather more uniformly with the subject, whereas the Great Pearl (Hui Hai) relates each part of his exposition more specifically to some of the various tenets common to the Mahayana as a whole, or to particular tenets emphasized by this school or that, as well as to some of the doctrines of Taoism. It seems to me that Huang Po gives us a brilliant overall picture of the means of arriving at the goal, and that the Great Pearl deals just as brilliantly but more precisely with most of the separate difficulties involved. For this reason, while his book is by no means of less interest than Huang Po's to the general reader, it will make a special appeal to those readers with a detailed knowledge of the various facets of traditional Buddhist doctrine." I could not agree more. Reading this book also helps greater understanding of Diamond Sutura, Zen Teaching of Bodhidharma, Heart Sutura (translator Red Pine), as well as teaching of modern sages like Nisargadatta Maharaj, Ramana Maharshi, David R. Hawkins.

Zen skin, flesh, bones, and marrow--as well as the blood and guts!

Published by Thriftbooks.com User , 13 years ago
John Blofeld's important translation of the Teachings of Zen master Hui Hai, also known as "The Great Pearl." The translator of the classic Huang Po Zen Transmission of Mind, offers another masterpiece of Zen literature in this book which includes complete translations of both "The Tsung Ching Record" as well as "The Tun Wu Ju Tao Yao Men Lun" (The Treatise on the Essential Gateway to Truth by Means of Instantaneous Awakening). This classic eighth-century Zen record is an insightful, and inspiring text essential to all Zen students, and a fascinating read for anyone interested in Zen. Two selections of this pure blood and guts Zen to enjoy now: 39.Q: For followers of the Way, what constitutes realization of the goal? A: Realization must be ultimate realization. Q: And what is that? A: Ultimate realization means being free from both realization and absence of realizations Q: What does that mean? A: Realization means remaining unstained by sights, sounds and other sense perceptions from without, and inwardly possessing minds in which no erroneous thinking takes place. To achieve this without giving it a thought is called `absence of realization'; and to achieve the latter without giving that a thought either is called `freedom from absence of realization'. 40.Q: What is meant by `a mind delivered'? A: Having a mind free from the concepts of delivered and undelivered is called `real deliverance'. This is what the Diamond Sutra means by the words: `Even the Dharma must be cast aside, how much more so the not-Dharma!' Here, Dharma implies existence and not-Dharma implies nonexistence - disengagement from both of which results in true deliverance.

Published by Thriftbooks.com User , 17 years ago
It is good to know that reprints of this excellent translation are available. Hui Hai, otherwise known as the 'Great Pearl' - was an outstanding Ch'an master of the Tang. This translation repays careful digestion. John Blofeld spent many years in China, frequenting Chinese Buddhist temples. The Chinese text translated here, was given to J.B. during one such sojourn at a Chinese Ch'an monastery. Blofeld's careful translation was given a final 'polishing' by Lu K'uan Yu, an eminent Chinese Buddhist translator, authorised by the Ven. Hsu-yun (1840-1959), the most outstanding Chinese Master of the 20th c. As such, this text could not have a better pedigree. While certainly the fruit of good scholarship (a useful glossary explains the proper meaning of Chinese Buddhist terms used in the text), this book is pre-eminently practical. It is unusually clear and focused and doesn't come over as a careless hodge-podge of koans. Like Huang Po's discourses (also ably translated by J.B.)Hui Hai's teaching is very direct and to the point. This book is actually a translation of two texts. The first is Hui Hai's 'Treatise on Entering the Gate to Sudden Enlightenment' (Tun-wu Ju Tao Men Lun), the second, a translation of the Tsung Ching Lu or 'Tsung Ching Record.' The latter opens with an account of Hui Hai's meeting with Master Ma-tsu, and Hui Hai's initial enlightenment: Hui Hai: "I have come seeking the Buddha-dharma." Ma-tsu: "Instead of looking to the treasure house which is your very own, you have left home and gone wandering far away. What for? I have absolutely nothing here at all. What is this Buddha-dharma of which you speak? " - whereat the master Hui Hai prostrated himself on the ground, enquiring: " Please tell me to what you alluded, when you spoke of a treasure house of my very own?" Ma-tsu: " THAT which asked the question is your treasure house (i.e. wisdom-mind). It contains absolutely everything you need and lacks nothing at all. It is there for you to use freely, so why this vain search for something outside yourself? " No sooner were these words spoken, than the master received a great illumination and recognised his own mind. Beside himself with joy, he hastened to show his gratitude by prostrating himself again . . ." Hui Hai stayed with Ma-tsu for six years, maturing and deepening his insight, subsequently becoming an eminent master in his own right. It is worth noting the impact of Ma-tsu's words, which pointed directly to Hui-hai's inherent wisdom or the mind -nature, inherent in us all. Hui-hai chose to lead the life of a Buddhist monk, but the essential gist of Ma-tsu's remarks has meaning for us today. What we are 'seeking' is already there. We can't 'find' it outside ourselves, and insofar as it is our inherent endowment, we cannot 'get' it; all we can do - and are required to do

You can get this book in the UK

Published by Thriftbooks.com User , 17 years ago
You can get this book in the UK about $15 try buddhismnow.com (see the very good review below)
Trustpilot
Copyright © 2022 Thriftbooks.com Terms of Use | Privacy Policy | Do Not Sell My Personal Information | Accessibility Statement
ThriftBooks® and the ThriftBooks® logo are registered trademarks of Thrift Books Global, LLC