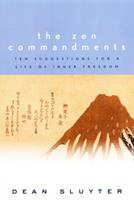 The Zen Commandments: Ten Suggestions for a Life of Inner Freedom

The Ten Commandments tell us how to behave, but they don't say much about the inner awareness from which outer behavior springs. Do the right thing, of course-- but better yet, find your inner light and doing the right thing becomes as natural as breathing. THE ZEN COMMANDMENTS offers ten powerful nudges toward that light. Drawing on sources from Zen stories and the Bible to jazz and rock 'n' roll, from American movies to Tibetan meditative techniques,...

If you're looking for a Zen book... look elsewhere

Published by RobbyG , 9 months ago
General ideas about general life situations. Not a Zen or Buddhist wisdom type book... skip it.

Published by Thriftbooks.com User , 18 years ago
Mainstream religions exhort us to behave ourselves-follow the rules, obey the commandments, adhere to the precepts, and we will be saved, blessed, and granted Grace, in this life or the next. Dean Sluyter puts the cart back before the horse. He emphasizes-and points the way to-the direct inner connection with the Divine that awakens consciousness and gives rise to compassionate loving-kindness. And, wonder of wonders, he does it with sparkling humor and the same surprising references to pop culture that made his first book, "Why the Chicken Crossed the Road," such a delight. Whether you're looking for enlightenment or entertainment, you're bound to find both in these ten suggestions.

A must have for spiritual types of all religions!

Published by Thriftbooks.com User , 19 years ago
It's been about 2 years now, that I've had this book. I have read it about 6 times. It's highly readable, very memorable, and easy to comprehend.I've struggled alot with the the restrictiveness of religion--with the freak-factor of spirituality if one ventures into the eastern religions or non-traditional beliefs...this is not that sort of book--nothing hippie, freaky or weird about this one...I let my mom read it!If I were to run out of my buring house, after my wallet and car keys, I'd grab this book. When I start to feel far from my spirituality, far from hope, far from answers, this is the book I pull off the shelf.

Published by Thriftbooks.com User , 20 years ago
There are certain spiritual classics that come to mind right off the bat that have stood the test of time and have provided manna for weary wayfarers and the rest of us. Titles like "The Dark Night of the Soul" and "The Cloud of Unknowing" are the first two I think of. These are books that you begin to read mostly out of curiousity and soon realize that every page is to be SOAKED in, slowly, savoring the deliciousness of it all. Merton's "(New) Seeds of Contemplation", CS Lewis' visionary "Great Divorce", St. Augustine's Confessions...etc. Then there are modern books, written within the last ten years that I am convinced are of this caliber. Terence Grant's "The Silence of Unknowing" was the only one I thought I had found. But "the Zen Commandments" is another one of those special books. Reading it on a wistfully breezy friday evening almost gave me the feeling of being on a weekend spiritual retreat, shacking up in some monastery. Some may attack it for being too user-friendly and call it bubble gum spirituality. I wonder why anything has to be cryptic to be spiritual. Sluyter invites us to take a look at the Ten Commandments in a new helpful light. He wanders with us through each commandment and strips each one down to it's pure naked core. For example, the first commandment: I am the Lord your God, Who brought you out of the land of Egypt and the house of slavery. You shall have no other gods before Me.Is reworded to bring out it's flavor:I am the supreme oceanic boundlessness that has saved you from all wavelike turbulence and constriction. Don't go back to it by mistaking any single wave for the whole ocean.It was at this point that I knew this was a book to be savored.If you're itching to see life in a new, ancient way, I highly recommend taking this particular journey.

Published by Thriftbooks.com User , 20 years ago
There are many wonderful spiritual teachers who write books, but they're not all wonderful writers. Sluyter is. His witty, inventive approach and his exceptionally clear prose style held me from the first page (a cosmic riff on "Singin' in the Rain") to the appendix (seven pages of the most useful meditation tips I've seen anywhere in print). The title is a joke which most people get; Sluyter states at the outset that he's not a Zen teacher and that the book embraces much more than Zen. (His fresh look at the Ten Commandments as an enlightenment manual is eye-opening.) The book is eclectic without being superficial, full of practical how-to's without being boring. Its pop culture sensibility (Elvis, Dylan, Homer Simpson, "Groundhog Day," etc., are cited alongside the Buddha) makes "Eastern" teachings lively and accessible to Westerners. I think even advanced meditators and seekers will find fresh insights here, while beginners will receive a thorough, entertaining, dogma-free introduction to the path.

Published by Thriftbooks.com User , 21 years ago
This is the book that I will recommend to anyone who wants an interesting and user friendly book on (mostly) Eastern spirituality that is also deep and grounded in tradition. Sluyter's excellent writing brings regular "hits" of smiles and wonder. It does not break new ground; it is about timeless wisdom. But it does open new, friendly versions of old spiritual practices, and it identifies spiritual signposts in our own familiar cultural landscape. Quotes range from Plato to Pogo, from Dogen to Dylan.In one chapter we are taken into a class with Charles Genoud, the originator of "Gesture of Awareness," an adaptation of Tibetan Dzogchen meditation. "In one exercise, each student picks out a spot across the room and walks toward it. After a few repetitions, Charles interrupts them halfway to their goal and has them walk to a different spot instead. Then he invites them to consider: "if we never reach the original goal, in what sense were we ever walking `toward' it? Where did that `toward' exist?....In our minds, we're always going somewhere; in actuality we always are somewhere." This exercise, like so many in "The Zen Commandments," can actually be done by the reader. So on one level this book is an easy, breezy read. On another level it leads to an engagement with conundrums and wisdom practices that can profitably be followed for years.Here is some tantric wisdom on marriage. "The procedure is simple: if you worship (that is, acknowledge) your partner as the infinite, then you get to set up house with the infinite, eat breakfast with the infinite, make love to the infinite. Such worship doesn't require you to relate in an artificial or saccharine way; that would just confuse the issue...It doesn't require you to suppress your occasional anger or other "negative" feelings, which are a natural, ordinary feature of relationships.... Instead of fantasizing about the person of our dreams, we devote ourselves to a real person and so awaken." Thomas Merton similarly advised, "Make a chair as though an angel were going to sit in it." Make your bed as though a god/goddess were going to lie in it. Tantra like this turns projection on its head. Instead of being ruled unconsciously by the mental pictures we make of others, we openly embrace the whole projection project and do it positively, and consciously.This book is successful because it is modest. It does elegantly what it sets out to do: makes wisdom accessible from our ordinary experience. Sluyter notes the joke about the seeker who asks the guru for the secret of life. The guru answers: "You do the Hokey Pokey and you turn yourself around; that's what it's all about." Sluyter's suggestions make good Hokey Pokey. You have to do the turning yourself.Unfortunately, for those committed to specific traditions the title is dishonest and a turn-off. Dean Sluyter, a student of Dzogchen, is not a Zen practitioner and has no business using "Zen" in his title, just as California wineries hav
Trustpilot
Copyright © 2022 Thriftbooks.com Terms of Use | Privacy Policy | Do Not Sell My Personal Information | Accessibility Statement
ThriftBooks® and the ThriftBooks® logo are registered trademarks of Thrift Books Global, LLC