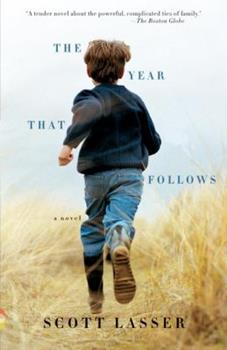 The Year That Follows

Cat is a single mother living in Detroit when her brother is killed in New York, just a day after he told her that he thought he had a son. Filled with determination, she sets off on a search for the orphaned boy, but it's interrupted when she gets a surprise call from her father. Sam is eighty and carrying the weight of a secret that he has kept from Cat all her life--and one that threatens the family she is attempting to build. ? Superbly realized...

Published by Thriftbooks.com User , 13 years ago
Scott Lasser's new book, The Year That Follows is a story about love, family, hope and courage in post 9/11 America. It is a wonderful, heartwarming book and I couldn't put it down.

Published by Thriftbooks.com User , 13 years ago
In his previous books---Battle Creek, and All I Could Get---Scott Lasser proved himself to be one of those rare literary writers who not only has important stories to tell, but who also knows how to tell them. In both of those novels, Lasser offers compelling, flesh-and-blood characters who are not afraid to face the world and fight for what they want and for what they believe in. Lasser explores life-and-death themes---fathers and sons, fear and desire, the compromises we all must make to live in the real world---but does so in stories that rocket forward, barely leaving readers time to catch a breath The Year That Follows, Lasser's newest, offers all the same pleasures of the previous novels and more. In it, Lasser has compressed a powerful family saga into the confines of a short novel that reads as briskly and effortlessly as a detective mystery. Set during 'the year that follows' 9/11, the novel tells the story of a family struggling to accept the death of Kyle---son, brother---who dies in the 9/11 terrorist attacks. Kyle's father, Sam, determines to properly mourn his son and insists the family observe the anniversary of Kyle's death according to Jewish tradition. He admits this is looking back---but what more can a father nearing the end of his own life do? Kyle's sister, Cat, on the other hand, has committed to looking forward: she has decided to find and possibly raise the child of Kyle and a woman she has never met. These twin strands make up the main storyline of the novel---but along the way we learn much more about Cat, Sam and what it means not only to be part of a family living through sudden loss, but just how fluid and resilient the definition of family can actually be. Though we barely meet him, the presence of Kyle haunts the book and provides a stunning, deeply felt rendering of grief and loss, while at the same time reaffirming the power of family, love and commitment. Lasser has created a world filled with joy and grief, where what we take for granted one day can be suddenly revoked on another. But he goes beyond that, showing not only what follows but what endures after unthinkable tragedy. If you care for literary fiction but also love a deeply moving and satisfying story, you should make sure to get your hands on this terrific novel and share it with everyone you know!

Published by Thriftbooks.com User , 13 years ago
Scott Lasser's third novel is a charm. I haven't read his first two yet, but they're on my list. The prologue packs a punch: Wall Street broker Kyle tells his sister Cat that he thinks he has an infant son from a relationship with another broker. The next day, both he and the child's mother die in the 9-11 attacks. Cat, a single mother living in Detroit, is determined to find the child with very little information to go on. Meanwhile, her eighty-year-old father is dealing with his own challenges on the West Coast, from blocked arteries to a secret he has kept from his only surviving child for too long. Father and daughter agree to observe the first anniversary of Kyle's death with a Jewish custom, even though neither has practiced the faith for many years - or, in Cat's case, ever. The empathy with which the two protagonists are treated is impressive, and the story moves at a good pace. Themes of family bonds and second chances are conveyed in a straightforward style that manages to avoid sentimentality.

Published by Thriftbooks.com User , 13 years ago
Fortyish bond trader Kyle died in one of the Towers of 9/11. Just before he died, Kyle informed his single mom sister Cat that he believed he is the father of an infant and that the mother also worked in the WTC. The siblings planned to meet shortly to honor their late mom; the next day Kyle was dead. Cat searches for her nephew, but makes no progress. A year later, Cat's dad Sam, a widower veteran dying from a congestive heart disease, invites her to come to the Big Apple from Detroit to be together while they memorialize Kyle in a Jewish ritual in spite of neither having any faith anymore. She agrees as a chance to reconcile with her dad as both grieved 9/11 differently. She leaves for New York with hopes of finding her nephew and in some ways her dad. THE YEAR THAT FOLLOWS is an excellent look at how people react after a tragedy occurs to loved ones. Cat and Sam are fully developed protagonists who have found separate ways to cope with what happened to Kyle, who we meet through the memories of his sister and father. Readers who relish a poignant look at survival coping will appreciate Scott Lasser's terrific tale as religious beliefs collapse when the walls came tumbling down yet religious ritual enables grieving family members to come together at a time when surviving loved ones need each other for emotional support. Harriet Klausner

Published by Thriftbooks.com User , 13 years ago
Scott Lasser's latest novel displays the writer's work at its most sensitive and compelling, with his trademark dry humor and the kind of page-turning pace that's rare in literary writing. It's too easy when thinking and writing about 9/11 to look at the larger crime and tragedy of it while forgetting the individual human lives that were changed forever. Using it as the backdrop for this ambitious and moving tale of quintessentially American stories, Lasser has homed in on the family ties that shape and define us all. It is spare, elegant and heart-wrenching in just the right doses. If you are a fan of iconic author James Salter, a big influence in Lasser's work, you can do no better than this novel. Read it first, before the inevitable Oscar-winning movie, so you can tell your friends you knew about it from the beginning.
Trustpilot
Copyright © 2022 Thriftbooks.com Terms of Use | Privacy Policy | Do Not Sell or Share My Personal Information | Accessibility Statement
ThriftBooks® and the ThriftBooks® logo are registered trademarks of Thrift Books Global, LLC