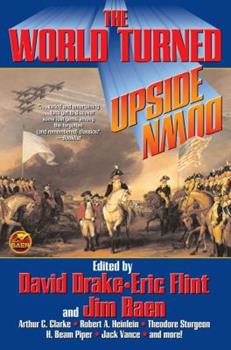 The World Turned Upside Down

Publisher Jim Baen joins two of his top authors to collect the stories which made them SF readers in their youth and fitted them to make major impacts on the SF field today. The quality of the stories in this huge volume compares favorably with that of any collection in the past fifty years--there's been nothing of equal size and quality since Groff Conklin's Omnibus of Science Fiction in 1952. Nevertheless the selection wasn't through some would-be...

Published by Thriftbooks.com User , 14 years ago
The three editors in this case have put together a selection of stories that influenced them as kids, some are obscure, some most definitely not. Certainly an interesting bunch, and definitely no junk here. Rescue Party - Arthur C. Clarke The Menace from Earth - Robert A. Heinlein Code Three [Clay Ferguson] - Rick Raphael Hunting Problem - Robert Sheckley Black Destroyer [Beagle] - A. E. van Vogt A Pail of Air - Fritz Leiber Thy Rocks and Rills - Robert Ernest Gilbert A Gun for Dinosaur [Reginald Rivers] Goblin Night [Telzey Amberdon] - James H. Schmitz The Only Thing We Learn - C. M. Kornbluth Trigger Tide - Wyman Guin The Aliens - Murray Leinster All the Way Back - Michael Shaara The Last Command [Bolo] - Keith Laumer Who Goes There? [as by Don A. Stuart] - John W. Campbell, Jr. Quietus - Ross Rocklynne Answer - Fredric Brown The Last Question - Isaac Asimov The Cold Equations - Tom Godwin Shambleau [Northwest Smith] - C. L. Moore Turning Point - Poul Anderson Heavy Planet [with Frederik Pohl] - Lee Gregor Omnilingual - H. Beam Piper The Gentle Earth - Christopher Anvil Environment - Chester S. Geier Liane the Wayfarer [Dying Earth] - Jack Vance Spawn - P. Schulyer Miller St. Dragon and the George [Jim Eckert] - Gordon R. Dickson Thunder and Roses - Theodore Sturgeon An alien survey ship is surprised to find that the Earth system sun is going nova well ahead of schedule, and gets in trouble itself when it goes to look for people to save and can't find signs of life, until much later. 3.5 out of 5 The cozy friendship between two teenage would be spaceship designers on the moon is interrupted when a well built actress from Earth arrives from a holiday, utilising both their services as guides. 4 out of 5 Future traffic policing is a 24 hour a day live in your vehicle job for these officers. Their banter is very entertaining. 3.5 out of 5 Alien scouts go for gruesome merit badge. 3 out of 5 A ship's crew lands on a planet and meets an alien with extraordinarily dangerous abilities. 3.5 out of 5 A dark star interloper rips the earth out of its orbit, and everything freezes. One family finds a way to construct a shelter to survive the freezing. 3.5 out of 5 A man and his mutant bull rebel against their society's liking for violence. 3.5 out of 5 History full of blowing stuff up and big fat fibs. 3.5 out of 5 Secret agent man gadget sabotage predictions. 3.5 out of 5 For friendly encounters, get rid of the xenophobic psychos. 4 out of 5 Aggressive sleepers may be waiting. 3.5 out of 5 A Bolo is a cybernetic supertank, basically. In this story, an old inactive one comes to life. 3 out of 5 A discovery of a lifeform buried in the Antarctic ice causes serious problems for an isolated research team. 5 out of 5 Crow not as smart as it looks. 3.5 out of 5 Computer god. 3 out of 5 Immortal humans breed too fast for the universe. 4 out of 5 Kid is a waste of oxygen. 5 out of 5 Shoot vampire gorgon women, d

Published by Thriftbooks.com User , 15 years ago
David Drake, Eric Flint and Jim Baen are a powerful combination of literary forces together in The World Turned Upside Down, in which publisher Baen joins with two top authors to gather the stories which made them sci fi fans in their youth. Sources used range from Analog to Weird Tales from the early 30s on and pack in some of the finest names in the field: a must for any 'best of the best' reader of the genre.

All the lost greats in one place

Published by Thriftbooks.com User , 15 years ago
Do you ever pine for that one great science fiction story you read as a kid, lost in some back issue of astounding or TMOFASF, with a forgotten title and author, never to be found again? The editors here have gathered all those together in one place. I can't tell you how many lost gems there are in this collection, or how many times I exclaimed, "That's who wrote that! I read this once 30 years ago and have been looking for it ever since!' Well worth every penny.

Published by Thriftbooks.com User , 16 years ago
I'm conflicted about how to review this, because--on the one hand--I'd read a good three-quarters of the stuff in it before (in some cases, quite a long time before.) On the other hand, there was some new stuff, and the "liner notes" for each story were often interesting. You could probably put together a very good literature class around the stories in this volume. On the gripping hand...riffing on classic sci-fi is a bit pretentious. Anyway...as with most compilations of early sci-fi, this is a good selection of famous short stories. If you're looking for a book to get someone started on science fiction (or trying to give some culture to someone who buys John Ringo for the covers) then you couldn't go far wrong with "World Turned Upside-Down". Be warned, though, that the content in some of the stories is a rather PG-13 (and some of them involve themes that younger kids simply won't get.)
Copyright © 2022 Thriftbooks.com Terms of Use | Privacy Policy | Do Not Sell My Personal Information | Accessibility Statement
ThriftBooks® and the ThriftBooks® logo are registered trademarks of Thrift Books Global, LLC