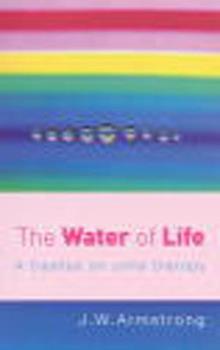 The Water of Life: A Treatise on Urine Therapy

An exploration of urine therapy. In this revolutionary treatise, John Armstrong puts the compelling case that all diseases (except those caused by traumatism or structural disorders) can be cured by one simple means. The therapy is an entirely drugless system of healing that treats the body as a whole. Moreover, the only ingredient needed is a substance manufactured in the body itself, rich in mineral salts, hormones and other vital substances, namely...

The Water Of Life

Published by Thriftbooks.com User , 12 years ago
This is a wonderful book, easy to read, and understand, I wish everyone would read the water of life, just once.

Published by Thriftbooks.com User , 13 years ago
Very Good information, how I wish Drs. would learn more about "natural cures" instead "just drugs"........ Excellent service in delivering the book also

Published by Thriftbooks.com User , 15 years ago
My fear has flown out the window, I'm convinced. Very easy to read guidelines for applying urine therapies, with testimonials.

Published by Thriftbooks.com User , 16 years ago
It's very useful both for ill people but also for the others ! I recommend it ! Thanks !

A wise and wonderful book.

Published by Thriftbooks.com User , 21 years ago
THE WATER OF LIFE : A Treatise on Urine Therapy by John W. Armstrong. Saffron Walden, Essex : The C. W. Daniel Co.Ltd., 2nd Edition 1971, Twelfth Impression, 1998.Since its first publication in 1945, 'The Water of Life' has achieved something of the status of a classic. Having just finished reading it, I can understand why. Armstrong, who was a British naturopath, was a very modest man who never intended to write his book. But after repeated requests, and after considering that he had a duty to his fellow men and women to reveal the details of the miraculous therapy he had discovered, he went ahead, and we should all be intensely thankful that he did. The book is a goldmine of good sense, practical advice, brief though fascinating case studies, and astute observations on a wide range of matters.His discovery - or perhaps rediscovery is a better word, since urine therapy was and is known and practised in many cultures and is even known to the animals - came about in a curious way. As a young man he suffered from consumption, had been passed through the hands of a whole slew of orthodox medical practitioners, none of whom had been able to cure him, and some of whom made his condition worse.But he seems to have been a religious man, and one day, while pondering Proverbs V.xv : "Drink waters out of thine own cistern, and running waters out of thine own well," he had a flash of inspiration which led him to link this passage with a few tales he'd heard about the curative properties of urine. Could this reference to "waters," he wondered, be a reference to the body's own water - urine? Having nothing to lose, he decided to give it a try. He began drinking his own urine, was restored to health, and went on to lead a vigorous and productive life by helping to restore the health of many others, both human and animal. Incidentally, one of the interesting features of his book, which indicates something of his kindly and unselfish nature, is that he has included a Chapter XVI 'Urine-Therapy on Animals.'In 'The Water of Life' he has provided details of the threefold 'urine fast' method he worked out, details which will be found enough to go on by mature adults of average intelligence who have a bit of common sense. The most important point to understand, which he emphasizes throughout, is that one should NEVER attempt to use or ingest any substance other than urine and pure water - whether chemicals, drugs, alcohol, denatured foods, etc., - when undergoing a urine fast or 'penance' as he liked to call it. The whole idea is to allow NATURE to take her course with as little interference from us as possible. A fast of urine and pure water, plus frequent, lengthy, and thorough urine massages, and, if necessary, the application of urine compresses, would, he felt, cure pretty well anyone of almost anything if undertaken long enough for the body to rid itself of toxins.Armstrong's 'The Water of Life' is a very rich book, crammed with fascinatin
Trustpilot
Copyright © 2022 Thriftbooks.com Terms of Use | Privacy Policy | Do Not Sell or Share My Personal Information | Accessibility Statement
ThriftBooks® and the ThriftBooks® logo are registered trademarks of Thrift Books Global, LLC