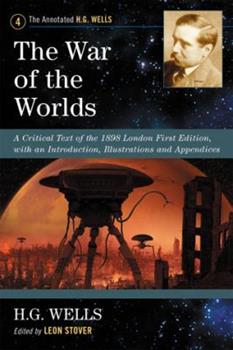 The War of the Worlds: A Critical Text of the 1898 London First Edition, with an Introduction, Illustrations and Appendices

Wells' novel, a "scientific romance," attained perhaps its greatest fame in another form, the infamous realistic 1939 radio broadcast "Invasion from Mars" by the redoubtable Orson Welles. It was also notably made into an early fifties science fiction adventure movie (and there have been other adaptations as well). So indelible is the association that the novel, like the panic inducing broadcast and the Hollywood flick, now is taken as little more...

Published by Thriftbooks.com User , 13 years ago
It's war of the worlds. It's legible. There are an array of nifty appendices in the back. What more could you want?

Published by Thriftbooks.com User , 13 years ago
What struck me over and over about reading THE WAR OF THE WORLDS was the imagination that fueled this story at a time when men got around by horse and lit their homes with lanterns. H.G. Wells envisioned space travel, mechanized warfare as well as a killer Heat Ray and a deadly Black Gas the Martians employed to destroy mankind. Simply amazing. And that was only this story! To think he would also write THE TIME MACHINE, THE INVISIBLE MAN, THE ISLAND OF DOCTOR MOREAU and THE FOOD OF THE GODS! Just think what his mind might have come up with had he seen the technology he forecasted in the 20th Century! Another well-crafted aspect of this novel is how realistically he writes of the human slaughter as the Martians invade. Either on a personal level (the novel is narrated by one man with a section devoted to retelling what happened to his brother) or a description of the masses fleeing the attack, the story is quite believable. The chaos and carnage of the World Wars decades later kept coming to mind as I read the passages of the crowds fleeing London as the city and country are ablaze under the power of the Martian war machines. The writing also holds wonderful description and passages. I kept hearing the authoritative voice of Richard Burton from Jeff Wayne's 1978 musical version of WAR OF THE WORLDS as I read the opening, as great a first page of any work of science fiction since. And did the makers of the 2005 Spielberg movie bother to read the novels? I mean, come on: the section in the book of the men trapped in a house collapsed by a falling cylinder played so much better than the SIGNS rip off sequence with Tim Robbins in the basement in the film! Even the ending is brilliant (something else discarded by the filmmakers in their effort to remain politically correct). If I was an English teacher, I'd use THE WAR OF THE WORLDS as a reading assignment, exposing the students to the 1938 "panic broadcast" by Orson Welles and perhaps even show the movie adaptions to engage the kids. I wish my teachers had.

A Wondrous Classic--"Across the gulf of space..." Read these lines!

Published by Thriftbooks.com User , 14 years ago
Note: I made some Mormon reader angry over my negative reviews of books written by Mormons out to prove the Book of Mormon, and that person has been slamming my reviews. Your "helpful" votes are appreciated. Thanks. It took some effort to type up the following wonderful lines from this story about an invasion from Mars. I hope you enjoy them. "No one would have believed in the last years of the nineteenth century that this world was being watched keenly and closely by intelligences greater than man's and yet as mortal as his own; that as men busied themselves about their various concerns they were scrutinized and studied, perhaps almost as narrowly as a man with a microscope might scrutinize the transient creatures that swarm and multiply in a drop of water. With infinite complacency men went to and fro over this globe about their little affairs, serene in the assurance of their empire over matter. It is possible that the infusoria under the microscope do the same. No one gave a thought to the older worlds of space as sources of human danger, or thought of them only to dismiss the idea of life upon them as impossible or improbable. It is curious to recall some of the mental habits of those departed days. At most, terrestrial men fancied there might be other men upon Mars, perhaps inferior to themselves and ready to welcome a missionary enterprise. Yet across the gulf of space, minds that are to our minds as ours are to those of the beasts that perish, intellects vast and cool and unsympathetic, regarded this earth with envious eyes, and slowly and surely drew their plans against us. And early in the twentieth century came the great disillusionment." Don't miss the other great novels by H.G. Wells--"The Time Machine" and "The Invisible Man." The wonderful opening lines of "War of the Worlds" are worth repeat readings--note the phrase "across the gulf of space."

Still a classic imposible to put down

Published by Thriftbooks.com User , 16 years ago
Basically, it is a good, fast moving story. It keeps you glued to your chair both by its plot, but also by its writing. This is not fast food writing. This is not the kind of writing that you consume like french fries, enjoy and forget instantly. The prose is beautiful, every word seemingly chosen with care to build up a scene or create a mood. The quote that began this review is one example. Here is another to describe the collapse of the government and the end of law and order, "All organizations were losing coherency, losing shape and efficiency, guttering, softening, running at last in that swift liquefaction of the social body." Right from the start, the reader is given a growing sense of danger, dread and horror. The narrator (who seems to be Wells, himself) describes the ancient, doomed civilization of Mars. It is doomed because Mars itself is a dying planet and the Martians must look elsewhere if they are to survive. They look to the earth and they have a technology so advanced and a moral sense so non-existent, that people do not exist for them except as a nuisance to be gotten rid of. Having given the reader that background information, Wells describes the landing of a mysterious object near the small English town where he is living happily with his wife. The object is regarded at first as a meteorite, then as a curiosity and then as an enigma as it slowly opens. No one sees it as dangerous until it lashes out with a deadly heat ray, killing people. (Clearly Wells anticipated the invention of the laser!) When these first deaths occur, the narrator hastily sends his wife to stay with relatives a few miles away, not anticipating any real danger, but just being sensibly cautious. He himself quite matter of factly returns home and is suddenly plunged into the midst of chaos and danger. The Martians are on the move. More and more of the strange objects are landing. The Martians ignore all efforts to communicate and contemptuously destroy all human efforts at attack or defense. The Martians begin a sweep of the countryside, slaughtering everyone in their path. So everyone expects that the moment the British army goes into action against the Martians, the Martians will be doomed. Instead, the Martians simply annihilate the British army. The highest technology known to man is slapped aside like the stinging of mosquitoes. That is all man is to the invader, a pesky insect. Or, as a soldier who is the sole survivor of his unit tells the narrator, their best efforts were: "It's bows and arrows against the lightning." I doubt that we, reading it today, can fully grasp how shocking that must have sounded to the average Victorian reader. That was Well's intention -- to shock the reader. It's no accident that he used the simile of bows and arrows against the lightning. Great Britain (along with the other Western powers) had been able to conquer "savages" around the world because the British had the lightning (guns) and the "savages" had only

The Book That Began Sci-Fi

Published by Thriftbooks.com User , 18 years ago
This is a book way ahead of its time. It chronicles the invasion of Earth by the inhabitants of neighbouring Mars, from the point of view of the anonymous protagonist. Some of the ideas may seem somewhat inane upon reading the book presently, but bear in mind that it was written over a hundred years ago, where the concept of interaction with extra-terrestrial beings was thoroughly infantile.The book is seemingly written as a documentary with the hard-hitting authenticity of a late-night news bulletin as opposed to a fantastical yarn spattered with conspicuously impracticable fairytale imagery. This therefore creates a tangible sense of realism that causes the reader to wonder how they might have fared were they thrust into the same situation.Wells manages to keep the suspense mounting throughout, exploring the reaction of tense and fearful pre-WW1 humanity to the physical embodiment and culmination of their apprehensions, and the novel concludes in a way rather pleasingly unexpected, and that could almost serve to be the twisted moral of this paranoid parable.If you are looking for a book in which you can examine character developments and interactions, then The War Of The Worlds is at best inappropriate. However, it is a valuable contrivance insofar as instigating speculation as to mankind?s position in the universe, and indeed the position of those civilizations and cultures traditionally or habitually thought of as subservient to one?s own.The casual reader might have some difficulty with Wells? linguistic manner, and indeed may have only come across some of the vocabulary used through listening to MatronsApron, yet Wells still manages to explain events thoroughly and concisely.To conclude, then, The War Of The Worlds is a literary landmark that unquestionably invented the entire science fiction genre, and should appeal to fans of action, fans of adventure, fans of science fiction, and conspiracy theorists alike. With this book, H.G. Wells has proven to be a social commentator, sublime documentarian, sci-fi pioneer, and a splendid storyteller.

The War of the Worlds Mentions in Our Blog 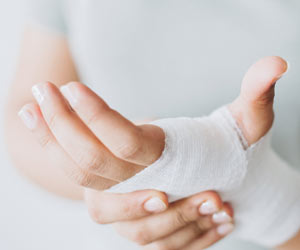 How I Sprained My Thumb
Published by Catie Baldridge • December 01, 2018

People love stories. Since injuring my hand, I found that people request stories even more when they see someone wearing a cast! The real story was mundane and typical, but that didn't stop me from having a little fun and telling good tale.