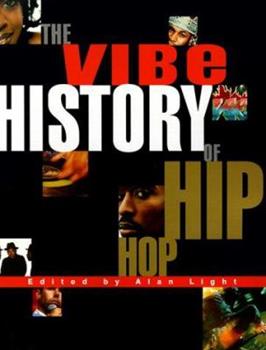 The Vibe History of Hip Hop

From VIBE, the voice of the hip hop generation, comes the definitive history of an undocumented music genre, incorporating not only music but fashion, dance, graffiti, movies, radio/TV, and politics, and spanning race and gender, urban and suburban markets, and all languages and nationalities. 200+ photos.

The story behind it all

Published by Thriftbooks.com User , 16 years ago
This book tells the complete story of hip hop the photos are cool of the true pioneers in the industry Pac, Big, and it shows where hip hop first orginated to where it is today. I rate this book #1 in all hip hop literature.

Published by Thriftbooks.com User , 19 years ago
This is the first book that tells the complete history of Hip-hop. From its South Bronx roots to today's status. Recommended for everyone who want to know more about hip-hop.

An excellent overview and critical history of Hip Hop

Published by Thriftbooks.com User , 21 years ago
This book was my introduction to Hip Hop and I recommend it both to people who want to rip their hands into the music and for those that been around it for years. I would rate this 4 1/2 stars if that was possible...The book covers Hip Hop from every possible angle, charting the cultural as well as political significance of the misunderstood and under appreciated genre. The writers assembled for the book put down literate, well thought out prose that gives Hip Hop its perspective for just about anyone who wants it, whatever their cultural background.I found The Vibe History of Hip Hop one of the best books I've read on music. I also used the editors' recommendations for CDs when I went shopping to flesh out my music collection.If you are seriously interested in Hip Hop, in critical music writing, want to look at glossy black and white pictures of Hip Hop performers, or listen to the 4 song cd included with the book, then this is a good buy and an even better read.

Published by Thriftbooks.com User , 21 years ago
Vibe History of Hip Hop Culture is a accurate chronology of the hip hop movement and its impact on urban culture. The book documents the urban experience and gives a great entree for brand marketers considering using the genre to hype their products.

A STUDY IN MUSIC HISTORY - HIP HOP DEFINED AND ANALYZED

Published by Thriftbooks.com User , 21 years ago
In this day and age, we are now witnessing an explosion of hip-hop in mainstream popular culture. Acts like Limp Bizkit, Korn and Kid Rock have all incorporated hip-hop into their music. Lately, hip-hop has been defined as 'the music of the youth'. This definition is devoid of color, making hip hop accessible to people of all races and cultures. The tricky aspect of this new 'universal' definition of hip hop is the possibility of the artform 'going the way of Rock and Roll' in that although it was pioneered by African-Americans, it may be 'stolen' by White artists the way Elvis and Pat Boone 'stole' Rock & Roll. There is sad evidence to this theory - Although TLC is the biggest selling female group of all time, they have yet to make the cover of Rolling Stone, yet Eminem made the cover after one hit song. There are countless other examples of this double standard that would take too much room to mention here. The history of hip hop is happening right now, but there's no better way to start paying attention by doing a little research, and VIBE's History of Hip Hop is the best place to begin.This book is a masterpiece. Some break down hip hop into four elements: Graffitti, The Turntable, The MC and Breakdancing. I believe that while these are the cornerstones on which hip hop culture was built, this definition is too simplistic - and the VIBE history of Hip Hop does a wonderful job of bringing to life yet another form of Black music that has taken not only the United States, but the world by storm.Broken down into many, many sections including "The Real Old School", "Pop Rap", "Ladies First" and "Hip Hop in the Movies", you can see first hand the amount of research and work that went into this book. Then, the book also focuses on hip hop icons like Run DMC, LL Cool J, Public Enemy and Salt-N-Pepa. Over 17 journalists contributed to this book and they are all well respected, talented writers in their own right. This book was edited by Alan Light, the original editor-in-chief of Vibe and current editor-in-chief of Spin magazine. It was published in the era of Danyel Smith while she was editor-in-chief, and now she's at Time Inc. Most of the writers in this book are youthful and hip, yet serious and ambitious. Authoritative is the best word to describe this document to hip hop. But wait - there are the many, many pictures that say so much to support the knowledge that is recorded on each of the glossy 418 pages in this book. Even the last few pages that tell you about each and every one of the contributors is an entertaining read. It's also inspiring for those of us who also wish to be journalists (like myself).So yes - if you want to learn about hip hop, or need a source to cite your knowledge of hip hop...this book is for you - by the editors of the best urban-oriented magazine since Ebony, Jet and Essence...Vibe is the magazine of our culture and our future. You'll be picking this one up time and time again
Copyright © 2020 Thriftbooks.com Terms of Use | Privacy Policy | Do Not Sell My Personal Information | Accessibility Statement
ThriftBooks® and the ThriftBooks® logo are registered trademarks of Thrift Books Global, LLC