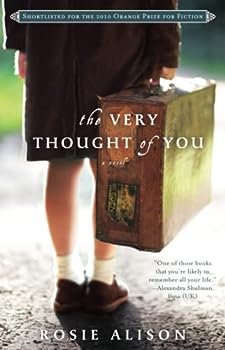 The Very Thought of You: A Novel

Shortlisted for the 2010 Orange Prize England, 31st August 1939: The world is on the brink of war. As Hitler prepares to invade Poland, thousands of children are evacuated from London to escape the... This description may be from another edition of this product.

Published by Thriftbooks.com User , 12 years ago
"The Very Thought Of You "had been nominated for the orange Prize so I thought I would give it a read. The book is a romance book but in so many ways its not. It covers loss ,and marriage and love on many different levels. It reads fast but is thought provoking. It leaves you with a lingering feeling and makes you think about war and how it affects children. Its a keeper, for I felt it could be read over to gain more insight and to rethink various characters. A great book. Hila

Published by Thriftbooks.com User , 12 years ago
This book was like going back in time for me. I am a Londoner, born and bred and was also one of those children evacuated during the war. I was sent to Honiton in Deven. coming from life in a pub to a farm..........I was miserable. My dad reached the point where he could'nt stand my being away either, so bombs or no bombs I returned hme to London pretty quick. The author Rosie Allison touched a chord in so many ways. I plan to reread the book in a couple of weeks as it's one of those stories where you will keep finding little gems of infomation that you missed the first time around.The very thought of you simply put, it's a lovely read, enjoy!

Published by Thriftbooks.com User , 12 years ago
The plot centres on Ashton Park, a fictional estate that functions as a home and a school for children evacuated in the early stages of the Second World War. Its beauty and tranquillity are contrasted with London during the blitz and with the Dachau concentration camp at the end of the war. The historic house is set in the North Yorkshire Moors, a region that was quite isolated in those distant pre-television days. Anna Sands, is an 8-year-old evacuee from London. Thomas Ashton, approaching middle age, and only partially recovered from infantile paralysis and his wife, and his unhappy wife Elizabeth provide a home and schooling for the children. The omniscient narrator knows her characters well and the writing style is deceptively simple and effective. The mood is romantic, rather sad, and evocative. The story is well told and holds the attention. It would be too easy to dismiss this subtle novel as merely holiday reading. There is more too it than that. The main theme is about 'a kind of love that does not end, or not until death', and this is contrasted with other more transient and less satisfactory relationships. This is in no way didactic, and it might seem picayune to quibble, but on occasion the plot line seems contrived to support this notion. I think the author sees this idealised love as a promise rather than a threat, a rather different opinion than my own. So we have something of a fairy story with a moral fable at its centre. The writing is so good that I wished that I could fully buy into the fable. Or you can read the novel for the story of Anna, who holds centre stage for over sixty years, and enjoy the book for that pleasure alone. This is a fine first novel. Comparisons with Elizabeth Gaskell are not inappropriate.

A book of great sensitivity and intelligence

Published by Thriftbooks.com User , 12 years ago
This is a moving book written with great clarity in a pleasantly straightforward style from the point of view of a traditional omniscient narrator. The centre of the story, if not the central character, is Thomas Ashton, a wheelchair-bound former diplomat around whom spin several female characters and their lovers. All have slightly different views and experiences of love. Most of the action takes place during the Second World War, when Ashton's stately family home in Yorkshire is turned into a boarding school for London evacuees. The atmosphere of the era and the setting is evocative and believable. If I had one criticism of the book it would be that the final section compresses too tightly the long period from the wartime events to the final denouement, and I would have enjoyed hearing more about the character on whom this part of the book focusses. That comment, though, is really praise for the book's intelligence and sensitivity because it is very rare indeed that I find a modern novel too short.
Trustpilot
Copyright © 2022 Thriftbooks.com Terms of Use | Privacy Policy | Do Not Sell My Personal Information | Cookie Preferences | Accessibility Statement
ThriftBooks® and the ThriftBooks® logo are registered trademarks of Thrift Books Global, LLC