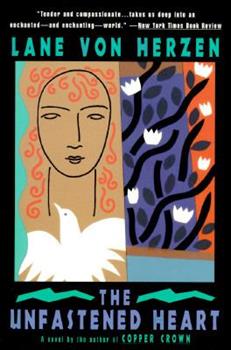 The acclaimed author of Copper Crown paints a stunning portrait of a woman whose extraordinary gift for loving others is put to an extreme test when a man casts a shadow over her relationship with her daughter. Every sentence is wrought with grace, perception, and lyricism.--Booklist.

Published by Thriftbooks.com User , 21 years ago
This is a beautifully written novel. Love, with all its glory and pitfalls, anchors the center of the universe in The Unfastened Heart. The women characters are so wonderfully written. Mariela, the daughter who falls in love with the boy next door, is like a flower in bloom. Her steadfastness in loving Addison is gloriously revealed. Anna, her mother, is a magical creature, seeing and having faith in love and in her daughter. Even the mother of Dr. Ettinger is a crusty old gal, full of spice. The guys are the complete question marks, however. How can Dr. Ettinger so fully fall in love with Anna, and yet so strongly cling to the notion that the girl next door is not good enough for his son? It's a contradiction in character that is never fully explained, and makes the spine of the plot center around something which didn't fully make sense to me. Given the difference in worlds of economics between how the rich and near-poor conduct their romances, I still wondered why it took so long to open this man's eyes. From Addison, the son, to Cristobal, the two-timing stud Anna fell in love with, all the men are faithless; and all the women are faithful. Given that gender lapse, this is still a beautifully written novel. The language, Von Herzen's control of pacing as the plot unfolds gives the book a lyrical ballad-like tempo. Seek this jewel out for its women. Keep reading despite its men. It weaves a wonderful spell of magic and leaves you wanting more!

A truly wonderful story about love and life.

Published by Thriftbooks.com User , 21 years ago
This book is so good it's too good to be true. There is of course no wonder that it was been included in the literary guild. It is full of creative and enjoyable imagery. The story speaks mainly about Anna and her life evolving around the problems other people face. Romance is described well throughout the book when they talk about Mariela's love life and Anna's love life itself. It's wise, poignant and one you cannot forget.

"Poignant, Fullfilling, and most of all tender to the heart"

Published by Thriftbooks.com User , 22 years ago
The Unfastened Heart leads you through a tribulation of winding gates and doors to be opened. Mariela, the enchantress, has a magical glow to her, and brings a small sometimes sad smile to your lips. It is a modern day romance, and yet it has nothing like the other 'romance' novels do, it posesses heart, and detailed writing. So I guess you could say its not just a romance, but more of a book about the understandings of life.

Published by Thriftbooks.com User , 22 years ago
This book is so beautifully written, you have to savor each word. She said things that made me stop to close my eyes and catch my breath. The characters often seem mystical, but somehow you believe that it could all be true. Read "The Unfastened Heart"!

Published by Thriftbooks.com User , 23 years ago
This book is wonderful, not only because it's not a typical stupid romance, but because it is so fabulously well-written. Ms. Von Hartzen has so many wise things to say about love and relationships and says them so beautifully. I normally hate romance novels, but this one is filled with truth, as well as a bit of mysticism, and I loved it!
Copyright © 2022 Thriftbooks.com Terms of Use | Privacy Policy | Do Not Sell My Personal Information | Accessibility Statement
ThriftBooks® and the ThriftBooks® logo are registered trademarks of Thrift Books Global, LLC