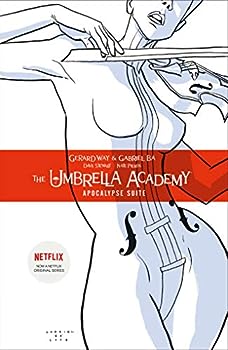 (Book #1 in the The Umbrella Academy Series)

Check out the New York Times best selling comics series before the third season of The Umbrella Academy debuts June 22, 2022 on Netflix! In an inexplicable worldwide event, forty-three extraordinary... This description may be from another edition of this product.

not bad, but don't love either

Published by lex. , 1 year ago
heads up: i watched the show adaptation before reading so my opinion may be a bit biased, and i'm also not typically a comic-reader so... yeah. also, no, i will not edit this so it says graphic novel rather than comic. • honestly, i didn't really enjoy it as much as i thought i would. the storyline felt a bit rushed, but maybe i just am unfamiliar with how comics work. the art was absolutely stunning, and it was super cool seeing all the similarities and differences between the book and show. i really loved how some of the original sketches were included in the back of the book :-) other than that, i don't have much to say! i'll probably still read the other two books in the series just for the sake of understanding the original plot, but i definitely don't have a negative view on it (besides #3... im not liking her, but that's personal not objective lol)

Published by Thriftbooks.com User , 13 years ago
It's kinda like TOM STRONG and PLANETARY thrown together with everything campy not thrown out, but glorified. If you have any clue what I'm talking about you will love this book.

If you like Dark Horse or Vertigo Comics then check this out.

Published by Thriftbooks.com User , 13 years ago
I had my doubts when I bought this book. I heard that the guy who wrote it was the guy from My Chemical Romance or something. Well, the comic store clerks never steer me wrong. And they told me to buy this. The first issue was great, all of them together was a reminder to some of the good Vertigo stuff and old Dark Horse comics from back in the day. If the writer wasn't the singer in a pop band then this book might be seen differently from readers' perspectives. However, since he is in a pop band, he has taken a group that is too cool for comic books and shown them this title, along with books like the Sandman, Constantine, etc. Worth a read. Also, so is Darwyn Cooke's; The New Frontier. Different genre, but really good.

An Offbeat Superhero Team Worth Following

Published by Thriftbooks.com User , 13 years ago
The Umbrella Academy is so delightfully offbeat that it's easy to overlook its few flaws. It's not a perfect graphic novel (the story sometimes meanders and doesn't ultimately make a whole lot of sense), but it's entertaining and inventive in so many ways. The entire story is a bit complicated, but here's a brief synopsis: One strange day, 47 women unexpectedly give birth, despite having previously had no signs of pregnancy. As if that weren't weird enough, seven of the children are immediately adopted by Dr. Reginald Hargreeves, an eccentric scientist who trains and takes care of them all. The kids develop strange and wonderful powers as they age, and by the time their nearing adolescence, they have become a superteam. Hargreeves refers to them all by number, so they don't see themselves as humans so much as things. They all have unique abilities, though, powers that are cool and potentially terrible at the same time. Many years later, the kids reunite at Hargreeves' funeral. There's a new threat to the world to face, and the kids, now full-grown, have a lot of bitterness (toward themselves and their late stepfather) and dysfunction to work through before they can get to saving the world. And one of them may be more menace than help in that department. It's all intriguing stuff, with a British sci-fi twist on the superheroics, and it comes from Gerard Way, the lead singer of the rock band My Chemical Romance. The art from Gabriel Ba is loose and inventive, deviating often from traditional straight lines and linear storytelling. So many loose ends are left untied at the end (in a positive way; the ambiguity is part of the story's charm) that the doors are left wide open for a sequel. That's a good thing, because Way and Ba have created an offbeat superhero team worth following. It's a superteam for adults and older teens, since it relies on some adult themes, and it will be a pleasure for adults to read. The Umbrella Academy is creative and intriguing, a deliciously weird offering of incredibly satisfying storytelling. -- John Hogan

"There's just nothing special about you."

Published by Thriftbooks.com User , 14 years ago
A rocker writing comics? What's that about? And, yet, Gerard Way, of the rock band My Chemical Romance, comes up with a humdinger of a comic book in THE UMBRELLA ACADEMY: APOCALYPSE SUITE, a wonderfully strange and inventive six-issued limited series published by Dark Horse Comics. It's an auspicious debut, really, and, now, count me as completely sold on Gerard Way, comic book scribe. So what's this thing about? Well, some time ago, around the globe and in the same instance, at 9:38pm, forty-three gifted children were born to women who had before shown no signs of pregnancy. An extraterrestrial masquerading as a human adopted seven of these children and trained them to save the world. But theirs was a cold and callous father, so it's no surprise that the kids grew up as a dysfunctional family. However, the training took hold and the kids did become superheroes. But the story really begins years after the team, called the Umbrella Academy, had disbanded as most of the siblings reunite for their father's funeral. I say most, because one had perished (we don't know how), while another is too bitter and disinclined to pop in. During this sad gathering, a world-threatening menace promptly surfaces, forcing these bickering capes to quit the bellyaching and work together...except that, of course, they don't quit the bellyaching. For those looking for something different, something original and wonderfully off-beat, THE UMBRELLA ACADEMY: APOCALYPSE SUITE will fit the bill. I don't know how much of Gerard Way's experiences and life style influenced him in his writing, but his stuff reads as from an askewed perspective. APOCALYPSE SUITE is inventive and surreal and keeps on surprising. For a first-time writer, Gerard writes with startling confidence and with wit and a certain airiness. To quote THE UMBRELLA ACADEMY's artist, Gabriel Ba: "For me, it's not important anymore that it's his first comic, or that he's a big rock star, because the story is really interesting and well told." Even thru the bizarre takes, Way infuses a layer of complexity and tragedy which grounds the stories. A key moment surfaces early on when eminent scientist and entrepreneur Sir Reginald Hargreeves (the alien's guise) impersonally tells one of his adopted daughters, "There's just nothing special about you." This heartbreaking indictment would have devastating repercussions years later for the Umbrella Academy. By the way, Sir Hargreeves is so detached that he tends to refer to his children as Numbers One thru Seven. Likewise, he insists that his children call him The Monocle, instead of "dad." Dang, that's cold. You could see why the kids grew so messed up. Way peppers his story with a diverse cast of personalities. I have my favorites. How could you not dig Spaceboy (Number One, and team leader), whose head years ago had to be transplanted onto a gorilla's body. Or the time-travelling boy (Number Five) now forever stuck at the age of ten? Or Rumor (Number Three), who has

Published by Thriftbooks.com User , 14 years ago
When I first heard about Gerard Way writing a series of comics based on superheroes I was shocked. I enjoy how he has written lyrics, they are amazing. And his writing is amazing and the form in which is drawn in is fantastic. When I read this a couple of months ago I was hooked but I could not find the rest in the series. And now they in a nifty volume and I can resume where I left off. For any fan of the band this is a must have and it isn't just for fans either. It really is amazing and colorful driven by a cool story with unique characters. It is truly remarkable in the way it's presented and I hope you will purchase this amazing collection. It is a nice change of pace from the volumes of DC and Marvel comics that seem to overflow on to the bookstores. It is nice that a new series as appeared and we have a chance to read something amazing. The umbrella academy is really good series and now we have the entire collection to read. It is the coolest comic I have read.
Trustpilot
Copyright © 2022 Thriftbooks.com Terms of Use | Privacy Policy | Do Not Sell My Personal Information | Cookie Preferences | Accessibility Statement
ThriftBooks® and the ThriftBooks® logo are registered trademarks of Thrift Books Global, LLC