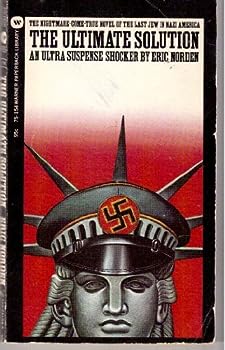 The nightmare come-true novel of the last jew in Nazi America! This description may be from another edition of this product.

Published by Thriftbooks.com User , 15 years ago
"The Ultimate Solution" takes place in a New York City of the early 1970s where the Nazis have won World War II and America is now under a fascist government with Charles Lindbergh as President. The Gestapo comes across evidence that there may be a Jew living in New York---years after the Nazi Party had supposedly exterminated world Jewry. Because the propaganda value of a surviving Jew would be dangerous, the Nazi gov't tasks a work-a-day NYPD detective, Bill Halder, to quietly investigate the case and determine if the Jew is alive or not. He's assisted by a Gestapo agent and thus begins a tour through a brutal, Nazi-dominated New York City. A culture where Slavs are used as sex slaves, cruelty to animals is encouraged, blacks are made to fight to the death in the ring, child prostitution and homosexuality are approved of and are rampant. To Halder, who grew up after the War, all of this is normal but to the reader it is horrifying. And evidence grows that, despite all of the Nazis efforts, a Jew has survived. But not only is Halder after him, but so are the Japanese who want the Jew as a propaganda tool. "The Ultimate Solution" is quite good and hard to put down once you start reading it and as an alternate history novel, one of the first of its kind and pre-dating the much more famous "Fatherland" by many years.
Trustpilot
Copyright © 2022 Thriftbooks.com Terms of Use | Privacy Policy | Do Not Sell or Share My Personal Information | Accessibility Statement
ThriftBooks® and the ThriftBooks® logo are registered trademarks of Thrift Books Global, LLC