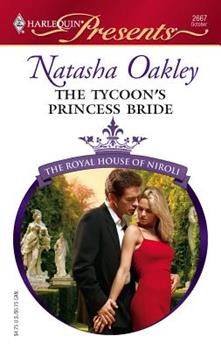 The Tycoon's Princess Bride: The Royal House of Niroli

(Book #4 in the The Royal House of Niroli Series)

Tall, dark and dangerous--the man from Mont Avellana... Black-hearted billionaire Domenic Vincini wants the lush riches of rival island Niroli, including the jewel in Niroli's crown--Princess Isabella Fierezza. She's forbidden, but to Domenic, a man scarred inside and out, that makes her innocence all the more appealing. If Isabella gives in to temptation she'll tie herself--and her kingdom--to its sworn enemy...

Published by Thriftbooks.com User , 13 years ago
In only 185 pages Natasha Oakley has created a beautifully crafted story with fully developed characters. Isabella is a princess of the Mediterranean island of Niroli. She desperately wants to be taken seriously and believes that she has hit upon a perfect solution to add commerce to her country. She wants to build a hotel on the beaches of Niroli which has a spectacular view of the neighboring island country of Mount Avellana. The two countries fought a bitter civil war twenty years before and now Mount Avenella is a democracy while Niroli remains a monarchy. Domenic Vincini happens to be a citizen of Avenella and he owns the land that Isabella wants in Niroli. He despises Niroli not wanting it to prosper but even more has dismissed Isabella as a selfish royal. Isabella has come to Rome to pitch her idea to Dominic and when she meets him she is surprised to discover that he is the survivor of a fire with some terrible burn scars on his body and some on his face. Dominic lost his wife and child to a fire years earlier. Domenic agrees to sell the land if Isabella agrees to spend a week on Avellana. She does and this is where the novel becomes so incredibly powerful. Isabella is so deep and caring and well, genuine. Like Domenic, I forgot that she was royalty. Domenic longs for her but knows he is not the handsome man he used to be. Isabella is photographed constantly and he believes his scars will limit their relationship. Isabella fights for every scrap of privacy so fighting for Dominic comes easily. Together they forge a beautiful and heartfelt romance.
Copyright © 2020 Thriftbooks.com Terms of Use | Privacy Policy | Do Not Sell My Personal Information | Accessibility Statement
ThriftBooks® and the ThriftBooks® logo are registered trademarks of Thrift Books Global, LLC