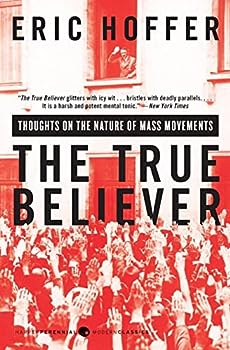 The True Believer: Thoughts on the Nature of Mass Movements (Perennial Classics)

" Eric Hoffer] is a student of extraordinary perception and insight. The range of his reading and research is vast, amazing. The True Believer is] one of the most provocative books of our immediate... This description may be from another edition of this product.

Published by Anonymous00100 , 6 months ago
Eric Hoffer's insights into the anatomy of the mass movement is unparalleled. His words are easy to digest but provide great knowledge. You will be able to draw parallels from the examples given to the mass movements of today. This book should be required reading for everyone.

Published by Thriftbooks.com User , 13 years ago
In this remarkable work, Hoffer concentrates on the active phase of mass movements where the true believer has real influence. He cautions that although mass movements share many traits this does not imply that they're equally toxic or beneficent. The work tries to understand and explain, not pass judgment. Their appeal derives from the promise in their materialistic, religious, nationalist or mixed natures. Intense, infectious emotion is the fuel. Hoffer analyses the various causes of the desire for change; discontent alone is not enough. Other factors are needed to activate it, like a sense of power and the ability to spread a vision of hope. Faith in a cause is to a large extent a replacement for the individual's lost self-confidence. The movement offers a substitute for individual hope. Furthermore, movements are interchangeable to a surprising extent. As he puts it; "A Saul turning into a Paul is neither a rarity nor a miracle." The reason is that they attract the same mentality. Antidotes include arrangements that discourage atomistic individualism or offers opportunities for action or new beginnings, like emigration. Creative expression is a potent protector: even the poor that are creatively involved are immune, as are the abjectly poor and members of close-knit family, tribal or religious groups. Potential converts are the disaffected, identified as misfits, outcasts, minorities, adolescents, the ambitious, the obsessed, the impotent in mind or body, certain categories of the poor, the extremely selfish, the bored and the sinners. Hoffer explains that the burden of freedom aggravates frustration in certain individuals. The followers exchange their individual responsibility for the sense of redemption that the movement offers. Those who feel like failures value equality and fraternity much more than freedom. This illuminates Russia's regression into totalitarianism and the passivity of Europeans. Another striking insight is that that visions, dreams and utopian hopes are powerful weapons; people will die for delusions. Craving/desire is what causes the reckless self-sacrifice. Movements always target the family; Hoffer provides proof by quoting from inter alia the New Testament. Disruption of the family makes the person more dependent on the movement. Movements attract and retain followers due to the refuge they offer from the boredom, barrenness, anxiety and lack of meaning in the individual's life. There are various species of misfit - the permanent misfit finds peace only in a total separation from the self. The extraordinarily selfish are likely to be the most fanatical champions of selflessness. Oddly, spinsters & middle aged women have played a crucial role in the birth of mass movements. Emotions like remorse and grievance appear to lead people in the same direction. Fervent enthusiasm helps to suppress a guilty conscience. United action and self-sacrifice are the elements that determine the vigor of a movement. Both sublima

Excellent analysis of the way we think

Published by Thriftbooks.com User , 15 years ago
Hoffer's insights are objective and sharp. He explains why we believe things. You'll see yourself and some of your friends in each chapter. After identifying the tricks you play on yourself, you'll be able to start eliminating them from your thinking, as well as recognize them in others. It's philosophy, religion, self-help, and sociology. It's a toolbox of useful thinking techniques as well as a detector of junk-thinking.

Published by Thriftbooks.com User , 19 years ago
I was given this book by my new Stepfather at age 19 in 1967. He had observed my flirtation, if not the beginning of a slide, with radical social activism. Mr Hoffer helped me to see that my attractions to these movements, which have largely been abandoned by even their most ardent proponents, were largely projections of unresolved and indeed unfaced inner coflicts.Thanks Dad. Thanks Mr Hoffer. You saved me and those around me a lot of grief.I think this simple book would go a long way toward social sanity if it were read by High School students.

Published by Thriftbooks.com User , 20 years ago
Eric Hoffer developed an uncanny passion for absorbing and interpreting information; granted, the passion was borne of his fear of a relapse to the blindness of his youth, but it was this passion, the passion of all believers, that he truly understood. The ultimate expression of Hoffer's understanding was this book.Hoffer's jumps between his cross-sections of movements, the primary people of movements, and the people whom may join a movement(s), without any regard for the overt differences on their faces. He sees beyond them to their similarities, and does an excellent job of displaying as much to the reader without bias for any particular one.And that's the truly amazing factor of "The True Believer": the detached nature of Hoffer's writing, which was favorably compared to that of Machaivelli's writing of "The Prince." Many people find such abstractions of information and lack of favoritisms troubling, because it leaves so many unanswered questions, or more importantly, the question of who or which movements were or are right or wrong, unanswered. But that's where the reader needs to think. Some people and indeed some movements may have been right or wrong, but Hoffer is not the one to make such a judgment. You have to make those distinctions for yourself. And when you do make those choices, consider the many similarities those movements have with movements closer to your heart. It forces you to consider things at their essence, which is the same."The True Believer" does not contain all the answers, but it shows the reader the way towards their personal choices and understanding in the matter. It's a book with potentially devastating prospects for the long closed-minded(who may risk shattering their belief/identity and being laid bare before themselves), but it leads many others to that higher sense of awareness needed to survive, even still in this day and age. Highly recommended.
Copyright © 2022 Thriftbooks.com Terms of Use | Privacy Policy | Do Not Sell My Personal Information | Accessibility Statement
ThriftBooks® and the ThriftBooks® logo are registered trademarks of Thrift Books Global, LLC