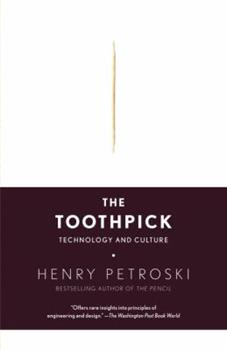 The Toothpick: Technology and Culture

A celebration culture and technology, as seen through the history of the humble yet ubiquitous toothpick, from the best-selling author of The Pencil . From ancient Rome, where emperor Nero made his entrance into a banquet hall with a silver toothpick in his mouth, to nineteenth-century Boston, where Charles Forster, the father of the American wooden toothpick industry, ensured toothpicks appeared in every restaurant, the toothpick has been an omnipresent,...

Published by Thriftbooks.com User , 11 years ago
Fans of Dr Petroski's previous books will know what to expect and will enjoy his latest effort as always. The attention to detail and history that are the hallmark of previous books are in evidence. Recommended as always

Published by Thriftbooks.com User , 12 years ago
"The Toothpick" is on the ROROTOKO list of cutting-edge intellectual nonfiction. Professor Petroski's book interview ran here as a cover feature on January 2, 2009.

Published by Thriftbooks.com User , 13 years ago
I am a long-time Petroski fan, owning all of his books and having read with great joy almost all of them. He has a knack for taking an ordinary, everyday object (pencil, paper clip, bookshelf, ....) and finding the stories that make for a fascinating socio-technical history. This book is no exception. He even expresses his own surprise, in that his original plan was to write a chapter on the toothpick for another book, but then discovering that he had so much material that he would have to set that chapter aside and eventually do an entire book. Interestingly, the toothpick story is a quintessential story of American ingenuity and inventiveness, business practices (both good and bad), regional advantages (Maine is the centerpiece of this story), and evolution in a changing world. There is early crisis during the first decades of the twentieth century, there is flowering and enormous diversification mid-century as woodcraft is turned to a variety of other products (Popsicles is one nice story), and ultimately, late twentieth century uprooting due to globalization (most toothpicks now come from China). What is so fun about Petroski's books is that he looks at a simple thing like a toothpick from so many perspectives. The toothpick as a cause of death (swallowing them, or putting them in orifices where they don't belong). Toothpick as goat of the dental profession. The toothpick industry in its environmental niches. The rise and fall and rise and fall of the toothpick as a social phenomenon (is it OK to use one in public? this is a constant theme in the book). Toothpick as a source of literature (often pretty bad, but entertaining). Petroski shows that much of the available history of the toothpick (on the web, in the Congressional Record, ...) is just plain wrong. Through amazingly interesting scholarship he tracks down what happened, who did what, and why. It may be that some subsequent scholar will find fault with Petroski's rendition of the history, but at this point in time, this has to be the best resource on this story. I hoist a martini to this tour de force; but with a twist of lemon rather than an olive on a toothpick, so I can avoid "the fatal martini."

Published by Thriftbooks.com User , 13 years ago
The toothpick would seem to be just about the last word in minimalism of both design and material, but Duke University engineering professor Henry Petroski has counted about 500 patents designed to complexify it. There is, of course, more to this than meets the eye. Petroski practically invented the popular book designed to explain not only how objects are engineered but why. Toothpicks, in their apparent simplicity, did not just appear unbidden, any more than the lead pencil, to which Petroski gave the 400-page treatment earlier. "The close study of anything as both an object and an idea is potentially intellectually rewarding and revealing about the technology and culture in which it is embedded," he writes. It is recorded, for example, that a century ago a country girl in Maine -- home of the machine-made toothpick -- who packed the boxes of picks slipped a note into at least one of them inviting a gentleman to write her, and that a gentleman did, and that he traveled from St. Louis to Maine to see her. What came of that, history does not record, but Petroski supposes, no doubt correctly, that more than one girl did the same. Boys and girls will be boys and girls, whether they have access to MySpace and Facebook or only toothpick boxes. Though I have for a long time been a fan of Petroski's writing, it has to be admitted that "The Toothpick" does not have the romance of "The Pencil" or the heartstopping drama of his best book, "To Engineer is Human," which is about falling bridges and similar disasters. Still, as always with Petroski, there are scores and hundreds of factoids that make you think. All during the 150 years of the rise and fall of the Maine-made toothpick -- they come from China now, of course -- the market challenge to the machined toothpick of birch has been the hand-made orangewood toothpick. These came and still come from Portugal. Around 1900, country girls in Portugal earned two cents a day making them. Orangewood toothpicks are now a luxury item, but still, Portugal is part of the wealthy European Economic Community. How toothpicks still figure into that economy is a puzzle; one which, uncharacteristically, Petroski does not investigate. Portuguese toothpicks have always, he says, been of the best quality. For a while, the Forster machine-made Worlds Fair pick was their equal. Today, Chinese-made toothpicks that bear the Forster label and look similar to a Worlds Fair are junk. No surprise there. But the éclat of the toothpick has declined. The decline preceded and was not caused by shoddy Chinese practices. By a kind of Gresham's Law of Toothpicks, after nearly two centuries of effort (recall those 500 patents), the globalized market supplies only worse toothpicks than when the improvement started. The University of Chicago School of Economics and the Cato Institute assured us it would turn out differently. True, there are late 20th century Swedish picks that owe little to the line of engineering that peaked with the Wo

A Huge Reference Source for a Tiny Tool

Published by Thriftbooks.com User , 13 years ago
"Surely I cannot have read a 400 page book about the toothpick!" was my feeling when I set down Henry Petroski's _The Toothpick: Technology and Culture_ (Knopf). But the pages slipped by, each with its details about "History's Splendid Splinter". Actually, that is the title of a fictitious journal of supposedly scholarly essays on all aspects of the toothpick, and it is funny to think of scholarship expended on such a teensy tool. Petroski's book is no joke, though he is a amusing writer. He is a professor of civil engineering and of history, and likes to write about small manufactured things to reveal larger themes, as he did in a previous book, _The Pencil_. It is hard to imagine that he has left anything out, including toothpicks in history and pre-history, toothpicks in fiction, toothpick etiquette through the ages, toothpicks and global trade, and plenty more. Why has he lit upon the toothpick? Petroski says it is a common wooden object, the simplest of manufactured things, has no moving parts, needs no maintenance, is universally available, and it performs a function humans really need. He writes, "Nothing can be more annoying than having a piece of food stuck between our teeth." Sucking on the object will often do little, the tongue can't grab, and fingers are too blunt to get leverage; the toothpick is the specific tool for the specific job. It can, of course, probe into other small spaces if you are, say, cleaning a tiny figurine, and it does a splendid job of holding sandwiches together or giving a handle to an olive (Petroski's witty author photo shows him in a tux, holding an toothpick so accessorized). Generally, though, this is a history of picks for teeth. They weren't always wood. When humans could make tools, toothpicks were among the first; a gold Mesopotamian toilet set of 3500 BCE has a tweezers, an earspoon, and a toothpick on chains as if on a key ring. Greeks and Romans used wood splinters as well as metal needle-type picks. Bones from chicken and fish have been used, as have walrus whiskers (packets of which were supplied to airline passengers by an Alaskan airline just forty years ago). The premier non-wood toothpick had to be the goose quill, which was one of the first mass marketed toothpicks, made as a cottage industry all over Europe. Charles became the world's premier toothpick manufacturer, starting around 1870, getting the machines that made shoe pegs (look them up) retooled to make sharper, longer pieces. He not only made toothpicks but made a market for them, and there was a turn-of-the-century toothpick boom. This did not mean that everyone approved. In 1883, an author was disgusted by the craze. "These toothpick fiends you may observe anywhere and at all times. They pick their teeth at the table, in the parlor, on the street, in the horse-cars, in the hotel office, on the rotundas, and in fact everywhere you meet them; the mania is prevalent, and is increasing rapidly." Using the toothpic
Copyright © 2020 Thriftbooks.com Terms of Use | Privacy Policy | Do Not Sell My Personal Information | Accessibility Statement
ThriftBooks® and the ThriftBooks® logo are registered trademarks of Thrift Books Global, LLC