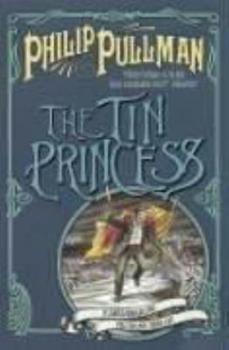 (Book #4 in the Sally Lockhart Series)

This description may be from another edition of this product. AFTER WITNESSING A mysterious explosion, three young Londoners--Becky, Jim, and Adelaide--journey to a tiny country high in the mountains of Central Europe in 1882. They're an unlikely trio to lead a...

Published by Thriftbooks.com User , 19 years ago
I don't see how anyone could hate this book. It's a little far-fetched, but you gotta expect that with Phillip Pullman. Look at the Sally Lockhart Trilogy! I liked how Sally made her appearance in this book. Of course she's changed since the trilogy, she's gotten older! Jim is still a cool character. The book was suspenseful and interesting. I fell in love with this book. The ending surprised me, thoguh. I wish that there was a sequel to this book!

Published by Thriftbooks.com User , 20 years ago
The Tin Princess is a brilliant book.It's roughly as good as the Ruby In The Smoke and much better than the earlier two books.It has lots of sub-plots and(very like Harry Potter) has suprises about the charachters.I really reccomend this book.

Published by Thriftbooks.com User , 20 years ago
Yep, as always, Pullman has been what very few other writers will never be:Brave. Sure, some of the writing in this book was a little formulaic and outlandish, but it's a book, if you can't get a little escapism in a book then where can you? Philip Pullman has never been afraid to kill off beloved characters or, as in the case of this book, write an ending that made me scream, until I saw the liitle footnote with the family tree. Clever guy. For all those moaning about the absence of Sally, I say that the author has forseen that she was close to exhaustion as a character (His fault!) and decided to let the other characters breathe a bit. Becky was not the greatest character, but the scenes between Jim and Adelaide where powerful without being slushy. I finished The Tin Princess two days ago and I am gagging for more Pullman. I don't care what. Although I don't agree with his political leanings or his views on the church (And his CS Lewis-bashing), or the way that he shamelessly advertises both in his writings, but he's so good that I just don't care. The Sally Lockhart Triliogy was far better than His Dark Materials, of which the last disappointed me greatly (Will and Lyra was a little bit vomit-inducing), and if he doesn't get another installment rattled up soon then I'm going to blow up his shed. Top marks, the sereis has made me laugh, cry, and yell out loud. (One problem, why do some publishers insist on selling this series as a type of Mills and Boon? Some of the Blurbs and cover art are dreadful (Esp. on Versions of 'Tiger)

If you loved, A Ruby in the Smoke, READ THIS BOOK

Published by Thriftbooks.com User , 21 years ago
The Tin Princess is a fabulous book about a young woman's struggle to control a country in a largely male society. Her rough beginnings in London give her the strength to carry on, along with the help of her friends, also the main characters of Philip Pullman's A Ruby in The Smoke. When there is trouble afoot in Razkavia, her courage and upbringing see her through to the end.

Published by Thriftbooks.com User , 21 years ago
The Tin Princess was full of wild adventures and twist and turns that keep you going. His endings surprise you and keep you asking for more, I know I wish there was another book. His talent for writing is wonderful. He knows how to catch the reader into the story and make them feel as if they are a part of the story themselves. I recommend this book to those people that like a good combination of fantasy/mystery/adventure/and a few other things mixed in. This book deserves only the best ratings! If you haven't read this book and you find it interesting, read it! The only thing that is sad is that there isn't another book to it. Note: You also might enjoy it more if you read the Sally Lockhart series first.
Copyright © 2020 Thriftbooks.com Terms of Use | Privacy Policy | Do Not Sell My Personal Information | Accessibility Statement
ThriftBooks® and the ThriftBooks® logo are registered trademarks of Thrift Books Global, LLC