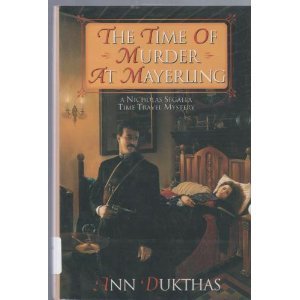 The Time of Murder at Mayerling: A Nicholas Segalla Time -Travel Mystery

(Book #3 in the Nicholas Segalla Series)

Nicholas Segalla journeys back in time to Vienna in 1889 to uncover the truth about the supposed murder and suicide of Archduke Rudolph, heir to the Hapsburg throne, and his beautiful young mistress,... This description may be from another edition of this product.

Third in the Series

Published by Thriftbooks.com User , 16 years ago
This is a novel by Paul Doherty writing under the pseudonym of Ann Dukthas. Paul Doherty is the consummate professional when it comes to writing historical mystery novels. I for one do not know how he can be so prolific with his offering of books and yet make sure that each of them is well researched. Whether they be 13th, 14th, or fifteenth century they are always true to the period. He also writes about Ancient Egypt and the Greek period in history of Alexander the Great. The year 1889, the place Vienna, at the time of the Hapsburgs. The glitter and glamour of the court hides a sinister world of political intrigue and then the world is shocked to the very core by the news that the heir to throne, the handsome Archduke Rudolph has shot is young, aristocratic muster, Maria Vetsera, killing her and then turning the gun on himself at the imperial hunting lodge at Maverling. The fact that Maria's body is hurridley buried in secret and that the government are keen to suppress any inquiry into the matter start rumours of foul play circulating. Scholar Nicholas Segalla put his own well being at risk to try to uncover the truth behind a spectacular cover up and attempt to expose a murderer with extremely intimate connections to the late Rudolph.
Trustpilot
Copyright © 2022 Thriftbooks.com Terms of Use | Privacy Policy | Do Not Sell or Share My Personal Information | Accessibility Statement
ThriftBooks® and the ThriftBooks® logo are registered trademarks of Thrift Books Global, LLC