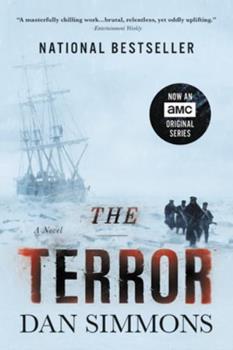 The bestselling novel, "a brilliant, massive combination of history and supernatural horror" (Stephen King) is now a major TV series. The men on board the HMS Terror have every expectation of finding the Northwest Passage. But what they don't expect is a monstrous predator lurking behind the Arctic ice. When the expedition's leader, Sir John Franklin, meets a horrifying end, Captain Francis Crozier takes command, leading his surviving crewmen on a...

Published by Thriftbooks.com User , 4 years ago
This is by far one of the best novels I have read. Be prepared for an endless adventure and constantly wondering what will happen next. Highly enjoyed this book.

Published by Thriftbooks.com User , 13 years ago
One of the things I love most about historical fiction, and history, is creation myths and the impact they have upon their culture's religion and social ideas policies. Knowing a creation myth can give you the outlook on life for an entire culture. For instance, Greeks believe that first there was chaos and out of it came love and then the world, the sky, the gods and finally animals and people. Eskimos believe something entirely different and it says much about their culture and way of life. Now you may be asking what Eskimo creation myths have to do with a historical novel about an expedition to find the Northwest Passage which was never seen from again. The answer is quite a lot really. I won't give it away but keep in mind that the author of this novel, Dan Simmons is known mostly for his science fiction and fantasy work. Keeping with that genera, though this book is definitely historical fiction, it has heavy mystical influences and a great deal to do with the creation myths of the people who habitat the cold land near the article circle. "The Terror" is based on real people and real events-to an extent. There was an exploratory expedition headed up by Sir John Franklin to find the Northwest Passage and the two ships were named "The Erebus" and "The Terror" and they did disappear never to be seen from again. However the events of this book are all fiction. When we begin the story the two ships have been trapped in the ice, immobile for two years. Their food supplies are running down, and their coal, and their moral. A mysterious Eskimo woman with no speech is living with them, feared by many of the men as a witch. On top of that, a creature-seemingly a polar bear but much larger, faster, smarter and meaner than any bear could be, is stalking the members of the crew, picking them off one by one and clawing to get into the ships.... Sounds creepy doesn't it? It is, very creepy. Like reading this book at night all alone in the dark makes you think a polar bear is out to get you creepy. It's also extremely well written and very atmospheric. I had worried at first about reading a book about a group of guys stuck all alone for two years (I admit-most books I read are about women by women) but there is not one boring page in this entire book. The atmosphere is too good. You can really feel the increasing fear and desperation of the sailors-the fear about never getting home, their hunger, their increasing madness and their complete terror of that thing on the ice. Oddly enough, though the bear is a source of terror and horror in the book, the most horrifying part of the whole novel for me was when the men started to turn to murder and cannibalism, maybe because it inspired a more rational kind of fear on my part. One thing about this book that was kind of off-the narrative rotates around from several different crewmen, including the captain of "The Terror" Crozier, who has more chapters than anyone else. In the beginning, his chapters are a

Published by Thriftbooks.com User , 14 years ago
Warning - if you managed to skip the Booklist review posted above, don't read it. For some reason, the reviewer gives away the ending! I will never understand why people do that. DON'T DO THAT.

Published by Thriftbooks.com User , 14 years ago
Staggering. This book is a litany of failure and not so subtly the failure of western civilization itself; however, there is a surprisingly redemptive streak running throughout. Simmons is a tremendous author, capable of producing masterworks in any genre of his choosing and he is at the top of his powers in this work, which though ostensibly historical fiction owes a debt to mystery, biography, horror, and science-fiction with liberal doses of Shakespeare, sociology and philosophy. More than a retelling of the Franklin expedition to find the Northwest Passage, "Terror" is the story of Captain Francis Crozier who commands HMS Terror. Crozier has to overcome bad food, poor leadership, even poorer subordinates, mutinous sailors, cold, scurvy and a Monster, in order to reconcile himself with the future that he has seen but fails to understand. Strangely the journey through this dark and 750 plus page novel is ultimately reaffirming and as voiced by a character late in the novel, salvation was always waiting for Crozier who just had to make his choice. Though ostensibly about failure, this book summarizes the triumph of man over adversity. Though ostensibly about discovery, the book details the tragedy of men dying needlessly within reach of the very survival skills they refused to seek much less adopt. This duality of themes gives great weight to the story; indeed, Simmons quotes liberally from Hobbes, Shakespeare, Homer, Poe and probably several others that I missed. And for fear of spoiling the read, suffice it to say that the author's erudition serves his purpose of rendering the tale disturbingly modern. It is a cautionary tale and in his wisdom, Simmons leaves us to determine what we take from it.
Copyright © 2020 Thriftbooks.com Terms of Use | Privacy Policy | Do Not Sell My Personal Information | Accessibility Statement
ThriftBooks® and the ThriftBooks® logo are registered trademarks of Thrift Books Global, LLC