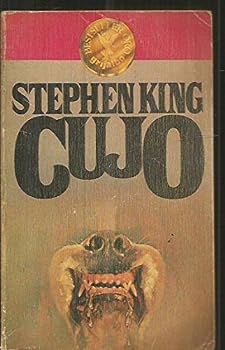 This description may be from another edition of this product. Set in the fictional town of Castle Rock, Maine The #1 national bestseller for Stephen King's rabid fans, Cujo "hits the jugular" ( The New York Times ) with the story of a friendly Saint Bernard that...

Ok book but not as shown in picture

Whether you’re a dog-lover or not, it’s a great book!

Published by Horror crazy , 1 year ago
This was among the first books I read by Stephen King, and it remains a huge favorite! The fact that Stephen King makes your heart ache for the dog and horrible pain he’s in because of the disease in no way takes away from the sheer terror of the story. It only makes it that much scarier because the dog’s demented determination to kill all humans, which it somehow deems responsible for much of its misery, makes the danger to protagonist Donna Trenton and her small son, Tad, that much greater. Whether you see this Stephen King tale as a horror novel or a suspense story, it’s absolutely one of the frightening books you’ll read, at least from this author! Highly recommended!👍🏻👍🏻

Published by HurricaneReads , 1 year ago
Just really felt for the dog. He went through so much but can you blame him? great read

Published by Thriftbooks.com User , 14 years ago
As usual with Stephen King, you have to wonder what would you do in this situation, whihc really could happen, trapped in a hot car with a rabid dog outside, hope I never have to find out!!!!!!!!!!!!!!!

Published by Thriftbooks.com User , 17 years ago
"Cujo" IS a gripping and compelling novel which pulls the reader in by leaving open ends thoughout the entire experience. This book is great from start to finish. You will find it imposible to put down. King is an incredible writer, and the best of his ability shines through in the novel with an easy to get into story and a scary as hell atmosphere. Many people may not understand how a rabid dog makes for a good read, but King writes the novel in such a way as to give the young nightmares and keep the old looking over their shoulders. King writes the novel exploiting every disturbing and gory detail to its fullest. This book is not for the faint of heart, but for those who can stomach it, it's a great read. This book is written like many of Kings novels, as a suspenseful horrifying novel full of twists and bends and freaky story telling. Cujo is a book that in my mind changed the way many authors write horror books. Cujo is the only horror novel I have read that kept me up for weeks and made me think. This is a horror novel and for anyone who likes Cooney or Pike will love this book

The scariest thing? The book's not horror.

Published by Thriftbooks.com User , 19 years ago
I can't think of any words to describe to you, the reader, how this book made me feel, but here goes anyway, because I like to be helpful.To lump King into the limiting paradigm of "horror writer" is like blasphemy, and if you're going to read Cujo, you might as well toss it if you're going to think of it that way. King is not a horror writer, any more than Fitzgerald is a cheap, 10-cent paperback romance writer.What King writes about is life--in all its bloody and dank, beautiful and mysterious glory. When I read Cujo I was terrified, and my hands even shook as I put the book down, finally finished at the end of the long night. But what terrified me the most is not the actual carnage, but the fact that this story is so real that the location might as well be Anytown, USA, and You, the Anonymous Reader Reading This Review, as the lead character. King said himself that, like in Ripley's Believe it or Not, reality and the bizzare (read:horror) coexist at all times, and that the juxtaposition of the two is where terror originates. REAL horror is here in the real world, not in Nasfaratu, not in Freddy Kreuger or Jason, but in your own home, or worse--in your own mind. The story on its own is almost boring: a lovable 200-pound St. Bernard catches rabies. So why was I shaking, and why did I burst into tears after reading the ending? Better yet, why was I so moved that I took the time to write this review to convince you to read it for yourself? Trust me. Read the book. I don't care if you've never met me. From one terrified reader with her head detached after reading Cujo to another reader contemplating buying it (that's why you're here, isn't it?), take my advice and get it. You won't regret it.

Published by Thriftbooks.com User , 19 years ago
This book by Steven King as so far an awesome book it is an exciting non stop thriller, he makes it so you want to put the book down but you can't and what I mean by that is the book is really descriptive and a little on the scary side I wouldn't recomend reading it late at night if you get scared easy but on the other hand you want to keep reading to see what is going to happen. This book is based around a little boy and a saint bernard who is well a man eater. I enjoy Steven Kings books for many reason and this is one of my favorites the book gives so much detail that you feel you could be there, I've seen the movie and I prefer the book it has more detail and makes you think a little about what is going to happen next.

Published by Thriftbooks.com User , 21 years ago
I have to say that this isn't a good or bad book. It depends totally on what you like to read. After Peter Benchely got away with half of Jaws being sprawling subplots (Which I really liked anyway) I guess King decided to have his go at what happens when you combine terrorizingly real animals (sharks and rabid dogs are real, and that's what's so creepy) and unfaithful spouses. Unfortunatly the beginning of the book doesn't read that well or fast, but at the last half, its gets very intense.Its well worth it, if your patient enough. So if you think your in for a rampaging beast gore fest think again. I would have enjoyed it if it killed brett, the mailman, kemp, and charity. That would have made it better, because thats what killer dogs are all about.

Cujo Mentions in Our Blog