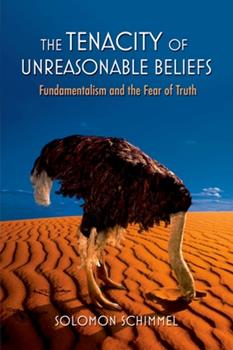 The Tenacity of Unreasonable Beliefs: Fundamentalism and the Fear of Truth

Modern scholarship in several disciplines makes it clear that the Bible and the Quran were authored by humans, not least because of their internal inconsistencies. Nevertheless, fundamentalists -- some of them highly educated professionals -- persist in believing in the divine authorship oftheir sacred scriptures. In this book, Solomon Schimmel seeks to understand why these people insist on such beliefs and how they defend them in the face of evidence...

Interesting Ideas, a bit too much rambling

Published by Thriftbooks.com User , 12 years ago
I should begin by saying that this book has a somewhat limited audience. As the book focuses primarily on the Orthodox Jewish movement, it is those in it who can relate most to what is being written. But of course, adherents to the movement's beliefs are not likely to be reading such heresy. Thus, the audience that will enjoy it most are likely to be Orthodox Jews who have either lost their faith or headed in that direction (faith here is not synonymous with observance). As such, I enjoyed the book and could relate to much of what was written. I myself have always wondered how it is that so many brilliant people adhere to "implausible beliefs" as Schimmel calls it. He offers many interesting ideas and insights that provided answers, as well as food for further thought. The fours stars, as opposed to five, owes to the fact that the book is a tedious read. It is repetitive, often rambling, and perhaps too emotional at times (though it is understandable, given his self professed motivations for writing the book in chapter 1). All too often, I found myself saying, "ok, we get the point- move on". Because of that style, if you are a person who has a difficult time staying focused, I cannot recommend the book. Overall, a good read that not only offers insights, but is sure to make every heretic feel really good about him or herself.

The Tenacity of Unreasonable Beliefs by. Dr. S. Schimmel

Published by Thriftbooks.com User , 13 years ago
As Dr. Schimmel focuses on understanding religious fundamentalism within Judaism, Christianity and Islam, he follows a critical, scholarly path to reveal the tenuous positions of their extreme beliefs. His is not a dry, abstract approach; instead, Schimmel illuminates for the reader his own personal journey from the intricate social and religious ties and doctrinal dogmatism of Jewish Orthodoxy toward an enlightened, scientific worldview. While explaining the three faiths' avid need to adhere to scripture and tradition, he reveals the weaknesses in their outlooks. The Tenacity of Unreasonable Beliefs which examines the harmful consequences of all fundamentalist beliefs, is a disturbing book which should be read by the fundamentalists who are its subjects. Unfortunately, however, these people choose to close their minds and to polarize our society.

A book sure to take you out of your comfort zone

Published by Thriftbooks.com User , 13 years ago
Sol Schimmel has written a book that is an important read for any thinking member of the three Abrahamic faiths, although Jews, Muslims and Christians will find much that makes them uncomfortable - or should do so. Schimmel's language is very strong at times ("[o]nce again we see that very smart people can believe very stupid things"), and he acknowledges that the book has "offended and will offend many people" but perhaps the kind of questions that are really worth asking are precisely the ones that make us most uncomfortable. Biblical Criticism has left us - even those of us who are orthodox (or is it orthoprax?) - with many questions, and Schimmel's book pushes some of these questions to their limits. I found the author's own Autobiographical Reflections to be one of the most important parts of the book (even though by their nature they are the most personal and perhaps least intellectual), and worth reading as a study in the phenomena of Chozer bi'Sheela (the hebrew term for those who were once religious and now profess agnosticism or atheism). For those interested in pursuing some of his questions further, try God, Knowledge & Mystery by van Inwagen (especially Chapter 5) and God and the Philosophers (ed Thomas Morris), especially Chapter 20 by the Orthodox philosopher David Shatz. I look forward to Schimmel's promised sequel to this really fascinating book. In the meantime, put this book on your Christmas/Hannukah/Idl Fitter gift list...

Review of :The tenacity of unreasonable beliefs

Published by Thriftbooks.com User , 13 years ago
I find this book to be an insightful analysis of the mechanisms underlying irrational belief. I admire the way the author, while being critical of fundamentalist religion, remains respectful of the role religion may play in our lives.

Review of The Tenacity of Unreasonable Beliefs

Published by Thriftbooks.com User , 13 years ago
In recent years a number of popular books have been written on the anti-scientific foundations of fundamentalist religious belief. What distinguishes this book from many of the others is that its author, a professor at Hebrew College in Boston, is a recognized Judaic scholar thoroughly versed in classical rabbinic texts such as the Talmud and was into early adulthood, a devotee of one such belief system, that of a doctrinaire version of Orthodox Judaism. His well argued critique of the foundational tenets of fundamentalist religion are written from the perspective of an insider who has spent many years of study in the leading yeshivas (religious seminaries) of America and Israel. He movingly describes the evolution of his own belief system from that of a fervent advocate to that of a profound skeptic. Indeed, his personal struggle with these issues is evident in the many arguments and counter-arguments he advances for and against fundamentalist religion. While Schimmel's emphasis is on a fundamentalist strain of Orthodox Judaism this book also has illuminating chapters providing a critical analysis of other fundamentalist belief systems including those of Islam and the more fervent branches of Evangelical Protestant Christianity. A common thread of the book is his critique of the insistence of the more extreme adherents of all three Abrahamic religions in the absolute authenticity of every word of their sacred texts as the direct word of God, despite strong historical and scientific evidence to the contrary. Both amusing and enlightening are his detailed discussions of the scriptural basis for the Christian belief in the divinity and resurrection of Jesus, the beliefs and practices of serpent handling Evangelical Protestants in rural America, and the claims of Muslim Koranic fundamentalists. To drive home his points he also provides a biting comparison with the animist religious culture of the primitive Azande tribe of the Sudan who firmly believe in the efficacy of magic, witches, and oracles. A theme throughout this book is its attempt to understand the tenacity of doctrinal ideology in terms of underlying social and psychological factors. Schimmel, who has a PhD in psychology, devotes one chapter (Chapter 6) to a discussion of these powerful social-psychological motivators. I regard this book as an important and pertinent critique of fundamentalist religious ideology in the first decade of the 21st century - a period when we are enigmatically experiencing the frequently tragic consequences of the dramatic rise, both domestically and worldwide, in the popularity of religious extremism, particularly in its toxic political manifestations.
Trustpilot
Copyright © 2022 Thriftbooks.com Terms of Use | Privacy Policy | Do Not Sell My Personal Information | Accessibility Statement
ThriftBooks® and the ThriftBooks® logo are registered trademarks of Thrift Books Global, LLC