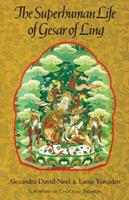 The Superhuman Life of Gesar of Ling

King Gesar, renowned throughout Tibet and Central Asia, represents the ideal warrior--the principle of all-victorious confidence. As the central force of sanity, he conquers all his enemies, the evil forces of the four directions, who turn people's minds away from the true teachings of Buddhism. These enemies graphically represent the different manifestations of cowardly mind. As Ch gyam Trungpa explains in the Foreword: "When we talk here about conquering...

Ian Myles Slater on: A New Incarnation of an Old Favorite

Published by Thriftbooks.com User , 17 years ago
The present work is a translation of a book originally published in French as "La vie Surhumaine de Guesar de Ling le Heros Thibetain, racontee par les bardes de son pays" in 1931 (and reprinted under shorter variants of the title), and in English in 1933 by Ryder & Co., London (reprinted 1959) and in 1934 by Claude Kendall, New York, as by Alexandra David-Neel and the Lama Yongden, and translated "with the collaboration of Violet Sydney." (The description of the translation from Tibetan at the end of David-Neel's 35-page Introduction does not go into details on the turning of French into English. The results are, at least, quite readable.) I originally became acquainted with Gesar in the 1960s through a rather dingy-looking rebound library copy of the 1934 edition, and was delighted to find it, years later, in a crisp-looking paperback reprint, with a new foreword (by Chogyam Trungpa, who presumably finds the translation acceptable), but otherwise unchanged. For those not interested in problems of Tibetan history, and the mutual adaptations of Tibetan civilization and Buddhism, the story is more than worth reading as an heroic romance. (Which is how I originally came to it, along with Cuchulain, Finn, and pre-Malory versions of Arthur and Lancelot). There have been some other books on Gesar published in recent years, some including interesting additional material, but the other popular retellings seem at least partly dependant on the doubly-translated David-Neel prose version of his stories. (Which were actually told in verse, and can reasonably be described as a series of epics.) That there is no comparable one-volume version in English is not surprising. There is in fact no complete "canonical" version in Tibetan to translate; instead, many tellings of episodes and sequences of episodes have been recovered, in written or oral form. David-Neel and her Tibetan associates came up with a reasonably connected story. Until a qualified student of Tibetan language and literature produces a representative selection of these texts in English of manageable length, the David-Neel version will have to satisfy the curiosity of the rest of us. What may be the third volume of the major "Library of Tibet" Gesar translation project, directed by Robin Kornman, was in fact scheduled for publication in January 2004. There are also tantalizing reports of Kornman's projected 800-page version of the Gesar story for Penguin, which as a single volume would be a good replacement for David-Neel. This has apparently been scheduled for publication in late November of -- 2007! Fortunately, the version available is highly enjoyable. It offers the reader a self-consciously Buddhist treatment of the story of a military hero, a fighter and conqueror who is presented as an incarnate defender of the Dharma, and Tibet, against a variety of essentially demonic enemies. In this way, the ethos of the old Tibetan royal and noble dynasties is adjusted to the ideology of Mahayana

Saviors around the World

Published by Thriftbooks.com User , 18 years ago
I first came across the name of Gesar of Ling while tracking Jesus, the Divine Hero. The study of mythology had grown up. There were Divine role models around the world. Oddily enough they fit into Lord Raglan's Hero Pattern. In this book you will find Gesar's story still in oral tradition. Traveling bards are telling this Sacred story. This is (I think) the first written account. This book is remarkable. My favorite parts are the wise questioning of a bard and Gesar's disappearance on the mountain. Wow! Sorry boys, this is no Satanic counterfit. These are the Heroes of humanity, the Divine Children, we admire. Their stories are reinterpreted for each generation. Listen. Who knows more about magic than a magician? Wondrous effects are produced by natural means; the courage, love, charity, wisdom and faith of the human heart. Beware of disgarding critical reason for blind faith and obedience, and a closed mind. Ignorance is the root of all evil. Only honest objectivity keeps one from becoming a real monster. (...)

Gesar Ling, The Once and Future King

Published by Thriftbooks.com User , 21 years ago
While traveling in India and Nepal I spent an extended time in researching the folklore around Gesar Ling through interviews with his direct descendents and his reincarnation (Namkha Rinpoche) in Kathmandu. Alexandra David-Neel's book "The Super Human Life of Gesar of Ling" proved to be extremely valuable, and fairly accurate with respect to the information I gathered. Despite David-Neel's association with Madame Bolovsky's "Theosophical Society" this book still retains a great deal of credibility. The introduction details an encounter she had with an emissary of Gesar Ling which seems to be derived directly from his reputation as the regional protector deity of the Dege region of Tibet.Her easy writing style makes this book accessible to the academic and the casual reader. I enthusiastically recommend this book to anyone interested in the more obscure writings on Tibet.
Copyright © 2020 Thriftbooks.com Terms of Use | Privacy Policy | Do Not Sell My Personal Information | Accessibility Statement
ThriftBooks® and the ThriftBooks® logo are registered trademarks of Thrift Books Global, LLC