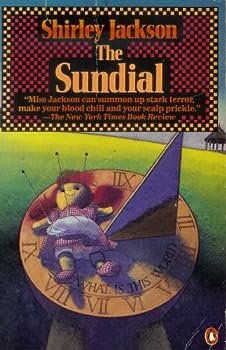 This description may be from another edition of this product. Before there was Hill House, there was the Halloran mansion of Jackson's stunningly creepy fourth novel, The Sundial When the Halloran clan gathers at the family home for a funeral, no one is...

A Masterpiece for the intelligent

Published by Thriftbooks.com User , 14 years ago
Shirley Jackson wrote this book just four years prior to her best novel, "We Have Always Lived in The Castle" and in many ways, the two books are like a set. Perhaps it is the grand style of living, the gracious ways in which one must behave while lacing poison into the sugar and the manner in which Jackson can write characters of the most horrific qualities in such a way that you are morbidly fascinated, often unable to take your eyes away from the page for what you are reading is so distasteful, but so very well written; it is akin to passing a fatalistic car accident and having to look; you've waited all this time and you DESERVE to look. Well such is the case with "The Sundial". Based on a premonition from dear, lovable Aunt Fanny, the world is coming to an end and it is only those who stay within the safety of the large house who will survive. The servants are dismissed, food and supplies are brought in en masse and then we watch and wait as we see the characters face the end of the world. The book is not about the end of the world-that would be far too easy. No, Shirley Jackson finds the people to be far more fascinating and as she always is, she is quite correct. We drive by this accident and almost bring the car to a complete stop, unable to tear our eyes away from both the brilliance and the horror. Jackson remains one of the finest American writes to have ever lived.

Published by Thriftbooks.com User , 19 years ago
This wasnt her best, but if your new to Shirley Jacksons writing style, this is one to read.

A "must" for Shirley Jackson fans!

Published by Thriftbooks.com User , 22 years ago
Why is Shirley Jackson so often miscast as a horror writer? "Sundial" is a rich, tapestried, multi-layered work by an enormously versatile author. Those new to Ms. Jackson will be mesmerized by her characterizations, rich narrative, and subtle, unnerving detail. Those familiar with her work will recognize in "Sundial" the "undercurrent of desperation" found in her best stories, supernatural elements a la "Hill House," the complexity of "Bird's Nest," the quirkiness of "We Have Always Lived in the Castle," and the wit (and laugh-out-loud humor) of "Life Among the Savages.""Sundial" succeeds on so many levels that a cursory summarization would be an injustice to the book. I myself am going to cogitate on its existential aspects; that is, a group of people who grate on each other forced to spend their lives together (Sartre's "No Exit").As the character of the schoolteacher says, "This is a real real real real real real real real adventure!" It is also a must must must must read for Shirley Jackson fans!

Prepare for world's end in a Gothic country house

Published by Thriftbooks.com User , 23 years ago
I haven't read this one in a while, but it is a fascinating account of a family trying to prepare for the end of the world. Their self serving plans for material and physical survival are both mundane and innovative. The ending may frustrate the reader, but it is a lovely journey to reach it.

Published by Thriftbooks.com User , 23 years ago
Why is this book neglected in favor of the inferior _Haunting of Hill House_? Probably because it's so weird, an apocalyptic novel that doesn't back away from a real apocalypse. Nearly every character in this book is hateful, but that's part of the joke: these losers are the future? The book burning scene will have you tearing your hair out in frustration, but in a good way. Not as scary as some of Jackson's Gothic work, but a delight regardless.
Copyright © 2020 Thriftbooks.com Terms of Use | Privacy Policy | Do Not Sell My Personal Information | Accessibility Statement
ThriftBooks® and the ThriftBooks® logo are registered trademarks of Thrift Books Global, LLC